Chief economic adviser at Allianz and a member of its International Executive Committee, is chairman of President Barack Obama's Global Development Council and the author, most recently, of 'When Markets Collide'. 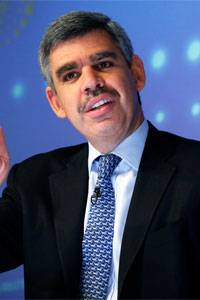 It is becoming fashionable to postulate the end of the anti-establishment movement, yet that would be both premature and misleading.

Advanced-country politicians are locked in bizarre conflicts rather than acting on obvious steps to reverse protracted, unequal growth.

Even if Deutsche Bank doesn't threaten a Lehman moment, there are at least four systemic factors that have driven its troubles.

I worry that our generation in the advanced world will be remembered - to our shame and chagrin - as the one that lost the economic plot.

Federal Reserve chief Janet Yellen is to testify to the US Congress once again and her remarks will influence the markets' outlook for the US economy.

Over the past two weeks, markets have again confounded any attempt to explain their short-term gyrations by looking at historical patterns, in particular by focusing on the influence of central banks.

After repeated bungling, Europe suddenly has an opportunity to do the right thing about Greece's unsustainable debt. It would be a tragedy -- for both Greece and Europe -- if this opening went to waste.

Oil prices have been heading south again, with a barrel of US crude recently falling below $42 (1,470 baht) -- the lowest level since March 2009, the nadir of the global financial crisis. And, while last year's sharp price drop was heavily influenced by two large supply shocks, the current decline also has an important demand dimension.

From blaming him for the renewed collapse of the Greek economy to accusing him of illegally plotting Greece's exit from the eurozone, it has become fashionable to disparage Yanis Varoufakis, the country's former finance minister. While I have never met or spoken to him, I believe that he is getting a bad rap (and increasingly so). In the process, attention is being diverted away from the issues that are central to Greece's ability to recover and prosper — whether it stays in the eurozone or decides to leave.

10 likely consequences of 'No' vote

By heeding their government's advice and voting "No" in the referendum on Sunday, Greek citizens sent an unambiguous message.