All eyes on Suu Kyi's meeting with Thai generals
Opinion

All eyes on Suu Kyi's meeting with Thai generals 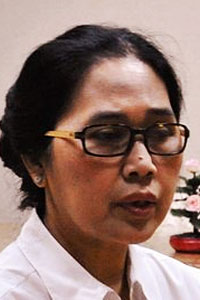 Eva Kusuma Sundari Member of the Indonesian House of Representatives

Aung San Suu Kyi came to Thailand and Samut Sakhon the first time she was released from house arrest by the former military dictatorship, but this week's visit will be as undoubted head of her country. (EPA photo)

Having spent over 15 years under house arrest imposed by the military junta that ruled Myanmar until 2011, Nobel Peace Prize Laureate Aung San Suu Kyi knows a thing or two about dealing with military men. For decades she went toe-to-toe with the Myanmar generals, challenging their authority and legitimacy and galvanising influential supporters from around the world to join the fight to "free Burma".

When she arrives in Bangkok tomorrow in her capacity as Myanmar's new foreign minister, Ms Suu Kyi will meet with the generals who currently run Thailand, shaking hands, exchanging pleasantries and posing for photos. The irony of optics will not be lost on observers.

Once considered Myanmar's stable, democratic next door neighbour, Thailand has backslid precipitously over the past two years, as its military rulers have embraced some of the worst aspects of Myanmar's previous government. The Thai junta has shut down space for political opposition, arbitrarily detained numerous critics, undermined media freedom, and repeatedly delayed its timeline for returning the country to democratic rule. 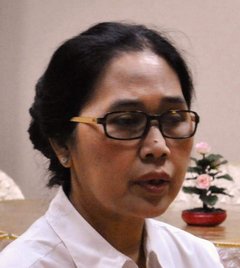 In less than two months, the Thai people will go to the polls to vote on a new constitution ordered by the generals. Criticism of the charter and campaigns against its passage have been banned, and violators of this edict have been threatened with up to 10 years in prison.

It was over eight years ago that the people of Myanmar voted in their own constitutional referendum, hampered by similarly restrictive regulations. The memory of this event is still fresh, and its impact still felt. This is why Ms Suu Kyi and her National League for Democracy (NLD) Party have made it a priority to amend the anti-democratic charter. Among other things, she has criticised its enshrinement of a permanent, unaccountable role for the military in politics. Perhaps she can offer some advice to her Thai hosts in this regard as well.

The Thai military's toppling of an elected civilian government in May 2014 occurred as neighbouring governments, such as those in Cambodia and Malaysia, were taking steps to entrench their power and crack down on opposition. Meanwhile, in a stark reversal of fortune, Myanmar was on the upswing, preparing for elections in 2015, which ultimately brought the NLD to power. This has put Myanmar's leadership in a new position -- as a regional source of inspiration for oppressed peoples throughout Southeast Asia.

Ms Suu Kyi has said she is not an activist, but a politician who must make tough choices for the good of her country. In that capacity, she might argue, she must play the game of realpolitik and avoid blunt critiques in the international arena.

But she also must recognise the unique position she holds within the Asean community. Millions of people around our region still look to her as a paragon of democracy, human rights and justice. As a regional leader, she has a responsibility to these citizens, in addition to the people of Myanmar who elected her.

Along with my colleagues in the Indonesian House of Representatives and other parliaments around Asean, I worked for years to support Ms Suu Kyi and the Myanmar democracy movement, urging regional governments to press the Myanmar military to end human rights violations and relinquish power. I did so with the knowledge that the fight for democracy and human rights did not end at the borders of my own country. Now, I hope Ms Suu Kyi will use her unique position to continue this fight and use her own freedom to support freedom for others, including those beyond Myanmar's borders.

This will take a concerted effort on the part of the region's progressive voices. Ms Suu Kyi has an opportunity to be a regional leader in this effort by speaking out in support of oppressed communities and leading by example both at home and abroad.

She also has an opportunity to be a regional leader in efforts to champion women's rights, with the recognition that women are still underrepresented in Asean governments and decision-making mechanisms. She must not abandon her commitment to non-violent struggle as she navigates the male-dominated world of Asean politics.

The roles of politician and icon are not mutually exclusive. Ms Suu Kyi can faithfully represent the interests of the Myanmar people who elected her while simultaneously standing up for the rights of other groups around Southeast Asia. Such a position is not only feasible; it is an opportunity to strengthen Myanmar's regional leadership position. It is also desperately needed to confront the reality of an Asean region, which appears to be teetering on the precipice of a return to the authoritarian days of the past.

Member of the Indonesian House of Representatives