USAID, the wolf in sheep's clothing in the Mekong
Opinion

USAID, the wolf in sheep's clothing in the Mekong 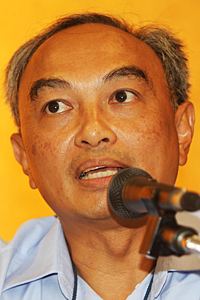 In 1994, the then Mekong Committee Secretariat released a report on 12 proposed hydropower projects on the lower Mekong mainstream. The proposed projects, which included the Sambor Dam in Kratie province in Cambodia, were initially criticised for their environmental impact and unfeasible finances.

More than a decade later, lower Mekong countries revived the proposal by approving feasibility studies for the projects which also included those on tributaries. Among them, the Sambor Dam resurfaced as the Ministry of Industry, Mining and Energy of Cambodia commissioned Guangxi Power Grid Company, a subsidiary of China Southern Power Grid, to conduct a feasibility study for this particular 3,300-megawatt dam located 560 km from the delta, and according to its original plan, was to relocate some 5,120 of the most downstream villagers. Nonetheless, neither the Chinese firm nor the Cambodian authorities released the study's results to the public.

In 2012, then US secretary of state Hillary Clinton opened the 2nd US-Lower Mekong Ministerial Meeting in Siem Reap. She admitted the US's mistakes in infrastructure projects on the Mississippi River. To "avoid the same mistakes", Ms Clinton offered contributions for impact assessments on proposed hydropower dams through the so-called Mississippi-Mekong Partnership which was to serve as a mechanism to promote cooperation and development in six pillars: agriculture and food security, connectivity, education, energy security, environment and water, and health.

In a bid to show the US's commitment, Secretary of State John Kerry during a visit to Vietnam in December 2013 ,re-emphasised the importance of the Mekong River, saying: "No one country has a right to deprive another country of a livelihood, an ecosystem and its capacity for life itself that comes from that river. That river is a global asset, a treasure that belongs to the region."

Among the studies conducted by the LMI, the "Climate Resilient Mekong; Maintaining the Flows that Nourish Life", which started in November 2010 and continued for the next three years, focused on the environmental impacts of hydropower dams under its Environment and Water Pillar. The project mainly looked at changes in sediment and nutrient flows in agricultural and fishery areas, and fish migration routes such as wetlands, the Delta and Tonle Sap. In addition, USAID hired the US-based Natural Heritage Institute to conduct the study of the lower Mekong dams.

Between 2012 and 2013, USAID and the NHI presented technical reports on designs with alternative sediment management for Sambor Dam, Lower Sesan 2 Dam and Sekong Dam in Cambodia along with Buon Tua Srah Dam and Buon Kuop Dam in Vietnam, while the study on the influence of sediment loads in the Mekong floodplain and coastal fisheries, and impact of dams on fish resources was conducted by the Cambodia-based World Fish Centre. But instead of supporting the Cambodian government's decision with impact assessments for Sambor Dam, the NHI presented another design for the dam lowering its top level reservoir to 35 metres above sea level and came up with some key improvements including sediment passage with a smaller and shorter reservoir. With the modified design, the dam's capacity is to go down to 1,700 megawatts.

However, the new design was found to be more complex than the original, with a bypass channel that required two dams, a facility to manage flows and electricity generation, and two diversion structures to prevent flooding on the Mekong's largest island, the 45km-long Roungeav Island. Besides, no comparative studies on environmental and social impacts of Sambor Dam have been made public.

At the moment, the Sambor Dam is just a proposal. Yet, whether it is the 1994 design or USAID's most recent option, Sambor Dam, if built, would cut the vital ecological linkage between the Delta, Tonle Sap, and the whole river. Endemic riverine species like the Irrawaddy dolphins and Mekongina erythrospila, a commercial fishery species found all the way up to northern Thailand and Mekong tributaries would lose their habitats as the dam would transform the essence of their migration routes -- riverine islands, rapids, whirlpools, seasonal wetlands -- into a sluggish pool.

There are concerns about the enormous social impact as at least 24 villages on Mekong islands and riverbanks would have to be resettled. Even the NHI's recent proposal for a smaller reservoir would nonetheless cut up the river by drying up a myriad of islands and rapids. The Mekong Delta in Vietnam would be faced with relentless shifts in unseasonal water levels.

The Mississippi-Mekong Partnership reflects nothing more than profound diplomatic rhetoric for the US to maintain its interests and status quo in the region and to counterbalance other powerful nations in the region. For this, USAID is simply a wolf in sheep's clothing in the lower Mekong region.

Research and campaign director of TERRA

Montree Chantawong is research and campaign director of Towards Ecological Recovery and Regional Alliance (TERRA).