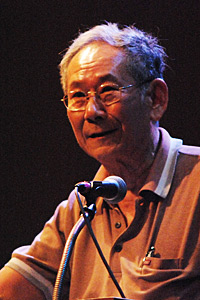 Jatupat "Phai" Boonpattaraksa (left), then 23, was arrested for this protest against Prime Minister Prayut Chan-o-cha at Khon Kaen in November, 2014. (File photo by Chanat Katanyu)

Khon Kaen University law student Jatupat Boonpattararaksa, also known as "Phai Dao Din", is an anti-coup activist who has the most vivid notions about the need to integrate political, social, economic and cultural contexts into Thailand's lawmaking or the interpretation of existing law.

At the age of 25, the student activist has been imprisoned in Chaiyaphum for distributing leaflets with opposing views on the draft constitution ahead of the last referendum. He has been on a hunger strike in prison for almost 10 days.

He is part of a new wave of thinkers who have brought in new questions for society and triggered new answers for the country's future. Imprisoning or silencing him or any other young people for their activism and opposing views will bury a chance for Thai society to debate and embrace new solutions.

Phai is a leader of the Dao Din group -- a student movement that had advocated for human rights with disenfranchised villagers in the Northeast for many years prior to taking an anti-regime stance in the wake of the 2014 putsch.

He is a well-known opponent of the draft charter which sailed through in the Aug 7 referendum. Disagreeing with the contents of the draft charter, he and other activists campaigned for the "no" vote to delegitimise the current regime and prevent any coup attempts in the future.

Phai has integrated the principles of law into his political activism, lending his thoughts on current and future contexts of Thai politics. For him, law is a set of principles mutually agreed as just and fair by all.

All of the National Council for Peace and Order's (NCPO) orders cannot be construed as law, even though well-known jurists who served the regime may want them to be. Law is not only about what is published in the Royal Gazette. It is rather about what rules have formed the common consent.

I doubt whether such idea of common consent has its root in Thailand's law schools. The country has instead produced a series of jurists who have not embraced this belief but used their technical expertise to legalise the needs and orders of the powers-that-be. They have done so without questioning whether there is comment consent for the authority of those in power or for the law and orders they wanted to impose on the people. Their lawmaking is indifferent from "manufacturing consent".

I do not know what profession Phai aspires to take when he graduates from university. What is more important is his legal notion that political, socio-economic and cultural aspects must be key elements for lawmaking and the interpretation of law. For him, law is a set of principles mutually accepted by all relevant parties. It does not matter whether his notion is right or wrong because his thinking deserves reflection.

However, the West's notion shifted after the Vietnam War as more academics followed the example of the British scholar. In Thailand, the belief that activism and academia should not be mixed has persisted since the 1976 student uprising. Society and the powers-that-be usually hold mistrustful and hostile views against activists. Nowadays, students who engage in political and social activism cannot escape such prejudice. Their activism is usually viewed as "inappropriate for students".

Phai, an activist before the 2014 coup, has been rebuked by the regime and its admirers for his poor academic performance. The hostility against him reflects the existing notion of influential conservative Thais who prefer an orderly society where people know their place and refrain from making noise about injustice or calling for corrective actions by authorities.

Taking away people's rights to activism is a precondition to prolong authoritarian rule in Thailand.

As veteran historian Charnvit Kasetsiri puts it, a civilised society should not imprison its young minds just because of their different political views. I could not agree more with him when it comes to Phai.

Imprisoning or silencing activists will shut the door for Thailand to confront new questions and seek new answers. It will be a curse for the nation to live in the same old vicious cycle where old problems await the same old solutions.

Nidhi Eawsriwong is a Chiang Mai-based retired history professor. The article was originally published on the Prachatai website.

Nidhi Eawsriwong is a Chiang Mai-based retired history professor. The article was originally published on the Prachatai website.