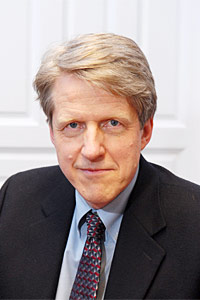 Economic inequality is a concern, but it could become a nightmare in the decades ahead, and I fear that we are not well equipped to deal with it.Truly extreme gaps in income and wealth could arise from many causes. Consider just a few: innovations in robotics and artificial intelligence, which are already making many jobs uncompetitive, could lead us into a world in which basic work with decent pay becomes impossible to find. An environmental disaster like global warming, pollution or disease could sharply reduce the ability of people of ordinary means to live in specific regions or entire countries.

Future wars using ever more highly destructive technology, including chemical, biological, radiological or nuclear weapons, could devastate vast populations. And it's not out of the question that dire political changes, like the rise of racist or otherwise exclusionary social structures, could have terribly damaging consequences for less privileged people.

Of course, I dearly hope none of these things ever happen. But even if they are unlikely, as part of our progress to a better world, we should be thinking now of how we might address them.

The presidential campaigns in the United States have not really touched on long-range issues like these. The campaigns have instead been focused primarily on short-term concerns, and on issues facing people of middle income instead of those in extreme poverty.

The private sector isn't helping much, either. It has not gone very far in developing insurance or hedging markets to protect against these risks. That raises an important question: can we depend on the benevolence of society to compensate and care for those who would lose out if dire events actually happened?

One way to judge the likely outcome is to look at what has happened in the past. In their new book Taxing the Rich: A History of Fiscal Fairness in the United States and Europe (Princeton 2016), Kenneth Scheve of Stanford and David Stasavage of New York University looked at 20 countries over two centuries to see how societies have responded to the less fortunate. Their primary finding may seem disheartening: taxes on the rich generally have not gone up when inequality and economic hardship have increased.

Instead, they found that taxes tend to rise when warfare increases, largely "because war mobilisation changed beliefs about tax fairness". These tax changes were generally aimed at ensuring national survival, not correcting economic inequalities.

Scheve and Stasavage found that democratic countries have not consistently embraced more redistributive tax policies, and most people do not vote strictly in their narrow self-interest. As the right to vote broadened through the centuries, for example, and people without property began to vote, they did not consistently act to tax the rich. These findings run counter to a popular narrative. Recall that in 2012, Mitt Romney said that in a democracy, a candidate who offers tax breaks to the less well-off at the expense of the rich will win mass support "no matter what". That claim does not appear to be supported by the historical record.

Instead, it appears that, for better or for worse, the majority of people share simple notions of entitlement and fairness. Scheve, Stasavage and their colleagues found that in 2014, when people in the United States were asked what marginal tax rates they would "most like to see" on family incomes of US$375,000 ( about 13 million baht), the median answer was 30%, with the bulk of answers ranging from 20% to 40%. (The federal marginal tax rate for that income is 33%.)

This is consistent with my own survey results, which focused on inheritance taxes. In 1990, Maxim Boycko, then with a Moscow think tank, the Institute of World Economy and International Relations, and I asked both New Yorkers and Muscovites: "In your opinion, what inheritance tax rate for really wealthy people do you think we should have?" The average answers in the two cities were virtually identical: 37% in New York, 39% in Moscow.

Taxing around a third of wealth, more or less, seemed fair to people. And perhaps it is reasonable, in the abstract, yet what will we do in the future if this degree of taxation won't produce enough revenue to meaningfully help the very poor as well as the sagging middle class?

Along with nine other economists, I contributed to a project that engaged in really long-term forecasting. The results appeared in a book edited by Ignacio Palacios-Huerta of the London School of Economics: In 100 Years: Leading Economists Predict the Future (MIT, 2013). None of us expressed optimism that inequality would be corrected in the future, and none of us ventured that any major economic policy was likely to counteract recent trends.

For example, Angus Deaton of Princeton, commenting on what he called the "grotesque expansions in inequality of the past 30 years," gave a pessimistic prediction: "Those who are doing well will organise to protect what they have, including in ways that benefit them at the expense of the majority." And Robert M Solow of MIT said, "We are not good at large-scale redistribution of income." Both Mr Deaton and Mr Solow are fellow Nobel laureates.

Despite past failures, we should not lose hope in our ability to improve the world. In a recent column, I described ways in which society might change a deep-rooted sense of entitlement by radically broadening wage and job insurance. Such a programme would be a start in getting us prepared to deal with some of the immense challenges that may lie ahead. Economic View

Robert J Shiller is Sterling Professor of Economics at Yale.

Professor of Economics at Yale

Robert J Shiller is Sterling Professor of Economics at Yale.