The importance of reversing the medical brain drain
Opinion

The importance of reversing the medical brain drain 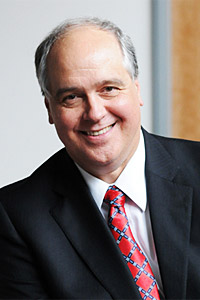 With physicians already scarce worldwide, demand for foreign-born doctors in the United States and the United Kingdom is stretching developing countries' medical resources to breaking point. In the US, for example, the shortfall of physicians could grow to nearly 95,000 by 2025, equivalent to 43% of all doctors working today.

When doctors are in short supply, the US and UK turn to countries like the Philippines to close the gap. But this leaves the Philippines with its own significant shortage of medical professionals.

The situation across Africa is no better. In Kenya, more than 50% of all doctors are now practising overseas, leaving just 20 physicians per 100,000 in the population. By contrast, the United Kingdom has 270 doctors per 100,000 people.

There is nothing wrong with doctors spending time working and training overseas; on the contrary, practicing in a variety of health-care systems is critical for producing experienced, well-rounded physicians. The fundamental problem is that medical staff and students are leaving the developing world en masse to train in countries like the US and UK, and then never returning to work in their own communities. Moreover, supplier countries often pay for that medical education directly or indirectly, without ever receiving any of the benefits.

To reverse this trend, we must allow medical students to train in world-class clinical settings, while encouraging them to return to practice in their home countries. This will not be easy, in part because practicing in developed countries is far more lucrative than practising in the developing world, and doctors overwhelmingly prefer to work in the countries where they have trained. Any effort to stop the one-way flow of medical talent from developing countries will have to address these factors.

For starters, we should focus on where medical training happens. Students could complete their pre-clinical training, and a portion of their clinical training, in their country of origin, and then be given the option of completing a temporary clinical-training stint in the US or the UK.

Residency programmes are the last stage of the medical-training process, and often determine doctors' preferred practice setting. When doctors from the developing world complete their residencies in the US and UK, they rarely return home. In fact, they are often given strong incentives to stay: permanent-visa status and a valid licence to practise medicine.

Low- and middle-income countries should provide more residency programmes, and the US and the UK, which bear some responsibility for the current imbalance, should assist them with funding and know-how. We also need to address the financial incentives that lure an unsustainably large number of developing-world doctors overseas in the first place, perhaps by obliging emigrating physicians whose home-country governments financed their medical-school training to pay the cost before allowing them practice medicine overseas. Thus, doctors would become liable for the value of their subsidised training when they elect to work abroad.

This condition could be imposed through a well-constructed scholarship system that embodies the slogan: "pay it back if you don't come back". Under this system, fewer students who intend to work permanently overseas will accept government subsidies, and more money will be available for students who wish to practice in their country of origin, or for investments in healthcare infrastructure.

Trinidad has successfully implemented such a strategy -- doctors who train overseas are required to return home for five years in exchange for their government scholarships -- and the US has a similar programme meant to encourage students to practise in particular geographical areas around the country.

At St George's University, where I am president and CEO, we have the CityDoctors Scholarship programme, whereby New York City students who receive full-tuition scholarships to medical school must return to practise in New York City's public hospital system for five years after their training. If they do not return, they must repay the scholarship as if it were a loan.

Medical-training programmes in developing countries should also consider how they can better direct future doctors to meeting domestic needs. Students overwhelmingly come from affluent backgrounds, often from the biggest cities. More should be recruited from rural areas and then be trained in settings where they are most needed. By broadening the geographic and socioeconomic talent base and identifying good candidates sooner, we can increase the chance that students will return to practise in their local communities.

We all have something to gain from globally sustainable medical-training practices, which will ensure that all countries' health-care needs are met. For developing countries there is no other way forward. ©2016 PROJECT SYNDICATE