In any future diplomatic spat or confrontation, even something on the scale of the Cuban missile crisis, it is entirely possible that world leaders may be tweeting at each other directly.

When it comes to managing relations with China, Donald Trump is tearing up the rulebook. First by using Twitter to announce his telephone call with Taiwanese President Tsai Ing-wen, and then in his Sunday afternoon complaints over Beijing's economic and military policy.

Traditionally, the key events in something as strategically crucial as Sino-US relations are heavily discussed for hours, if not days, at the highest ranks of government. The new president-elect, however, shows every sign of being more spontaneous -- and looks set to continue to use his personal social media posts in a way that will terrify foreign policy purists.

Mr Trump has yet to pick his secretary of state -- and that decision will be crucial to the foreign policy tone of his presidency. Given his style so far, however, there seems little doubt that he will also see himself as America's "diplomat-in-chief". That could make life difficult for whoever he picks to runs the State Department.

Throughout his campaign, Mr Trump signalled his broad intention to take a tougher line on China, even as he builds bridges with Russian leader Vladimir Putin.

When it comes to Beijing, however, Mr Trump's main focus has been on trade. When it comes to China's relations with neighbours, he had been less aggressive -- arguing, as with Europe, that America's Asian allies should do more to protect themselves. At one stage, he even appeared to be suggesting that Japan and South Korea should be left to acquire their own nuclear arsenals for self-defence, a suggestion he later pulled back from.

Beijing may well have been surprised, therefore, by the speed with which Mr Trump has apparently embraced Taiwan and then raised concerns over Beijing's broader military expansion. Mr Trump's call is believed to have been the first by a US president-elect or president with a Taiwan leader since 1979, when President Jimmy Carter began recognising Beijing as the sole government of China. China views Taiwan as a breakaway province.

According to Mr Trump, the call was set up at the behest of -- and initiated by -- the Taiwanese government rather than Mr Trump himself. Presumably, that offer has been made to previous president-elects by Taiwan -- but they have politely declined. Mr Trump almost certainly knew it would antagonise Beijing but went ahead anyway.

US support for Taiwan, of course, has always been clear -- particularly through massive military sales and other forms of assistance. In 1996, a particular period of tension in which some experts believed Beijing might move militarily against Taiwan, President Bill Clinton famously sent two US nuclear-powered aircraft carriers to send a similarly strong message of Washington's resolve.

That carrier deployment, however, would have been heavily discussed at the top levels of the US government before being implemented. M Trump's tweets seem entirely unmoderated. He may not yet be president, but what he writes from his Manhattan penthouse -- often in the early hours of the morning -- can be as important as any highly crafted speech or policy statement. 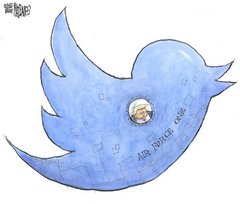 To career diplomats and foreign policy purists, unfettered tweeting is a terrifying concept. But it is not so different from President Barack Obama's habit of holding town hall-style meetings both in the United States and overseas, often with students, where he often opines widely and spontaneously on a range of topics.

The Obama White House has been more focused than any other administration on retaining its own control of foreign policy. For all the talk of her experience as secretary of state, Democratic presidential candidate Hillary Clinton was seen by many in Washington as having less freedom to manoeuvre than many in the role before her, acting first and foremost as a mouthpiece and personal envoy for the president on matters of importance.

Current incumbent John Kerry, officials and other State Department watchers say, has been more prone to speaking his mind -- or misspeaking, sometimes leaving officials struggling to explain exactly what he meant. In general, however, recent White House administrations have been deeply focused on trying to control the message when it comes to international affairs.

What we will shortly have in the Oval Office, however, is a businessman -- and perhaps more importantly, a reality TV and social media star -- whose arguably strongest skill set is in generating controversy and attention. Take that habit too far, and you could easily start a war.

This is not how those in and around government ever thought social media should work. Organisations like the State Department, for example, have set up hugely complex systems to manage a plethora of social media feeds for individual officials, embassies, missions and campaigns. In the military, it is often quite literally easier to get authorisation to kill someone in an active war zone that it is to get a Twitter or Facebook posting cleared for release.

In any future diplomatic spat or confrontation, even something on the scale of the Cuban missile crisis, it is entirely possible that world leaders may be tweeting at each other directly -- with the rest of the world, including their own diplomatic and military command chains, forced to watch and play catch-up.

Building the systems and structures to manage that, particularly in managing a potentially messy and dangerous confrontation in the Baltic states or South China Sea, is going to be a challenge. Other more subtle forms of communication -- unacknowledged direct telephone calls, messages delivered through spies, envoys and allies -- have also not gone away. But they will now be taking place at the same time as what could be frantic social media exchanges.

Mr Trump and Mr Putin, of course, are also currently having their own very public courtship by social and traditional media, a precursor to what will presumably be their first face-to-face meeting sometime next year. Whether that relationship blossoms or crashes, it will likely do so in a very public manner.

Both Bill Clinton's decision to send aircraft carriers to the Taiwan Strait and Mr Trump's Twitter actions were forms of geopolitical messaging. Judging by the measured editorial response to Mr Trump's call in China's state-run Global Times, that's something those in charge in Beijing clearly understand.

"Before he gets sworn in, he faces some vague space to handle things," it said in an opinion piece. "By answering Tsai's call he may want to test how China would react and therefore prepare him for dealing with the country and gaining some advantage after he takes office."

Like everyone else in the world, those in charge in Beijing still really don't know what to expect from the incoming president.

If relations with Beijing go well, Mr Trump might never talk to a Taiwanese leader again. If he wants a way to needle the world's largest economy, however, he has set a precedent -- and next time he could let it be known that he initiated the call. Alternatively, of course, he could just say something even more outrageous on social media. Forget the 3am telephone call. We are now in the world of the 3am tweet. Reuters