Thai action plan a step to rights protection by business 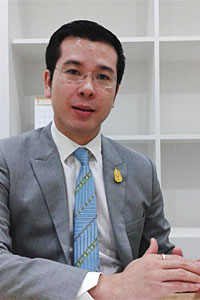 A worker cleans a construction site at a shopping centre in Nonthaburi. Thailand is drafting a national action plan to ensure its commercial enterprises adhere to human rights principles and prevent rights infringements. PATIPAT JANTHONG

By initiating a process to draft a national action plan on business and human rights (NAP) to implement the guiding principles adopted by the United Nations Human Rights Council, Thailand has taken a crucial step to ensure its commercial enterprises will adhere to human rights protection.

The Thai government has set up a national committee under the Justice Ministry to draft the plan which will cover all types of business entities -- from small- and medium-sized enterprises (SMEs) to multinational corporations. The first draft is expected to be completed by the end of this year.

The UN guiding principles, also known as the Ruggie principles after John Ruggie, their author, are founded on three pillars: to protect, respect and remedy. That is to say the states' duty to protect, the responsibility of business to respect and the general obligation of states and businesses to provide remedy in the case of business-related human rights violations.

Amalgamating existing human rights precepts, the guiding principles do not create any new duty. Underpinning these principles is the recognition of the roles of businesses in human rights protection and violations.

A national action plan, like the one being drafted by Thailand, can be used as a tool for states to reaffirm their commitment to human rights protection and the roles to be undertaken by the various agencies under their jurisdiction vis-à-vis business enterprises.

Thailand's initiative on the action plan is driven by both international and national factors.

Through the second cycle of the Universal Periodic Review process in 2016, Thailand adopted a recommendation proposed by Sweden to develop and enact the NAP.

Nevertheless, home grown efforts were already present. The National Human Rights Commission (NHRC) of Thailand submitted to the cabinet a proposal for the government to ensure observance of human rights by Thai corporations, including in their overseas investment, through various measures that are to be integrated into a national plan.

This NHRC's proposal stemmed from a number of allegations of human rights violations in neighbouring countries against Thai investors and investigations of the issue conducted by the NHRC.

In its affirmative resolution in May last year, the cabinet tasked relevant agencies, such as the justice and finance ministries, the Board of Investment and the Securities and Exchange Commission, to incorporate human rights in the national investment strategies. The policy approach toward prevention of extra-territorial human rights abuses by Thai corporations marks an advanced degree of human rights protection that significantly reinforces the effectiveness of the UN guiding principles.

A distinction should be made between the guiding principles and the expected action plan on the one hand and corporate social responsibilities (CSRs) on the other. While there are overlapping areas, CSRs are largely voluntary measures implemented by businesses but the former are state-driven and, especially for the action plan, will be mandatory for state agencies.

Remedial actions, the third pillar of the guiding principles, are also not generally encompassed under the scope of CSRs. Unlike CSRs, which are traditionally adopted by large corporations particularly those listed in the stock exchange, the guiding principles and the action plan cover every type of businesses from SMEs to state enterprises and listed companies.

The essential requirement of the principles is for all business enterprises to respect human rights by doing no harm and they can achieve this by identifying aspects of their operation that pose risks of violation.

Inclusiveness and participation will be key principles in the work of the NAP Committee. In the coming months the committee will conduct consultation with various sectors and agencies in major regions of the country to raise awareness on the guiding principles and identify national priorities for the first plan. This will be in parallel with the commission of a national baseline study of current issues on business and human rights.

Some challenges in this process have been identified. Capacity of enterprises to undertake human rights risk management and due diligence significantly varies from one enterprise to the next. Those listed in the stock exchange are already familiar with CSRs and various reporting requirements, while the same cannot be said about their non-listed peers, particularly SMEs and family-owned businesses. Thus, to ensure their compliance and cooperation, emphasis of the first action plan should be placed on listed companies and state enterprises that are under direct purview of the government.

Engagement with SMEs at the initial stage should be through capacity-building programmes to enhance their understanding and familiarisation.

For government agencies, apart from strengthening their coordination and mainstreaming the guiding principles through state enterprises, more intelligent and innovative use of procurement regulations to apply the principles to private suppliers and the institutionalisation of remedies and grievance mechanisms will be a litmus test of the success of the action plan.

Currently, no country in Asean has adopted such an action plan. Some have embarked on the drafting process. However, the relevance of the UN guiding principles to the Asean Community is undeniable.

The freer flow of trade and intraregional investment, that is a prominent feature of the single market advanced by the Asean Economic Community (AEC), has in a few cases caused negative impacts and human rights violations in destination countries.

Environmental degradation, forced relocation of indigenous peoples and exploitation and discrimination of child labour and migrant workers are just a few notable human rights infringements known to be perpetrated by multinational corporations.

As an investment exporting country in Asean, Thailand is showing a leading role in requiring its commercial enterprises to adhere to human rights principles when conducting investment abroad.

The Asean Intergovernmental Commission on Human Rights (AICHR) has paved the way on CSRs and their linkages with human rights. This is merely the beginning since, as noted above, CSRs constitute only one component of the guiding principles and proliferation of national action plans will not be capable of tackling issues of intrinsically regional nature.

A comprehensive Asean strategy or plan on the mitigation and prevention of business-related risks on human rights that have been spurred by the AEC's economic integration agenda will contribute to the global Sustainable Development Goals and Asean's own vision that puts people at the heart of development.

Seree Nonthasoot, PhD, is representative of Thailand to the AICHR. He also serves as the adviser to the NAP Committee set up by the Ministry of Justice.