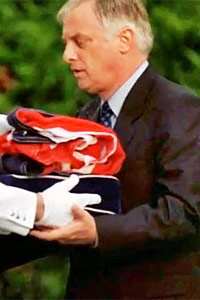 While I was governor of Hong Kong, from 1992 until the handover of the city to China in 1997, I kept a diary. Consulting that diary over the last few months, as I write a book partly about my experience there, I have discovered several passages describing China's "struggle" school of diplomacy -- one that endures even today, as we approach the 20th anniversary of Hong Kong's return to Chinese sovereignty.

In China's struggle school of diplomacy, no decision could be confirmed without a protracted argument with Chinese Communist Party (CCP) officials. That argument ended only when it became clear that the Chinese could squeeze no other concessions out of those on the other side of the table. Time, Chinese negotiators seemed (or pretended) to believe, was on their side, so they could always wait out their opponents.

It was often difficult to see the point of the whole miserable exercise. Why, for example, push up the price of a new airport for Hong Kong by delaying its construction? I suppose the Chinese authorities preferred that the project be completed when China, not the United Kingdom, was responsible for the city.

Another example of this bullying approach concerned the arrangements for the handover itself. China made a number of proposals that, had we not resisted them, would have allowed its army to sweep into Hong Kong well before June 30, 1997, the agreed handover date.

The Chinese also pushed hard to make the handover ceremony itself a humiliation for Britain. They wanted the Prince of Wales, the principal British representative at the ceremony, to pay court to China's president.

Here, too, we held firm, eventually agreeing that China's president and the Prince of Wales would enter a room at the same time. The president made a short formal speech, to which the prince and British Prime Minister Tony Blair offered impromptu responses. With a flurry of handshakes, everyone departed and that was that. It was not the kind of ceremony that should have taken such pains to plan, particularly given that the Chinese had nothing substantial to say; yet, as was so often the case, it was the product of a struggle.

Chinese negotiators' obstreperousness might be somewhat palatable if the agreements that resulted were ironclad. But contrary to the perceptions of many -- including those to whom I have spoken about China's struggle diplomacy -- evidence suggests that Chinese authorities do not necessarily keep their word.

Consider China's accession to the World Trade Organisation. During the negotiations, in which I was involved, China promised to open its market to the rest of the world. But it has done so only slowly -- far more slowly than other countries opened their doors to Chinese exports and investment. More broadly, the CCP connived to create a sloping playing field -- just ask any foreign chamber of commerce in Beijing.

It probably seems hypocritical for a Western politician to criticise emerging powers for untrustworthiness, at a time when the president of the United States -- once the leader of the West -- is the shockingly undependable Donald Trump. With moves like withdrawing the US from the Paris climate agreement, Mr Trump has shown that he can be trusted no further than he can be thrown.

But that will change, when Mr Trump, sooner or later, is swept into the ashbin of history. The same cannot be said for the Politburo Standing Committee -- the CCP's top leadership body -- which outlasts any one leader. As China becomes an increasingly important player in global affairs, the rest of the world would do well to recognise the possibility of unreliability, or even deception, by its leaders.

An important test of China's reliability will play out in the next few years in Hong Kong. The shift in sovereignty from Britain to China was based on the "joint declaration" between the two countries concluded in the mid-1980s. This document, an international treaty lodged with the United Nations, guaranteed that Hong Kong's autonomy and way of life would be safeguarded for 50 years, or until 2047.

So far, things are not going quite as planned. Despite having largely respected the agreement during the first few years after the handover -- though it rather quickly started dismantling the arrangements for ensuring democratic accountability -- China's grip on Hong Kong has tightened considerably.

Far from implementing democratic reforms, China has threatened the rule of law, the independence of the judiciary and the autonomy of Hong Kong's universities. It has also made not-so-subtle attempts to curtail freedom of the press. Hong Kong residents have been abducted and taken across the border to face the "rule of law" on the CCP's terms.

The CCP seems to think that after 20 years, the outside world won't care what happens in the former British colony. The people of Hong Kong, meanwhile, increasingly have to wonder whether China will respect their city's rights -- or squeeze its windpipe.

Hong Kong remains one of the freest cities in Asia, not least because of the pride its residents take in their status as Hong Kong Chinese. They are patriots, who believe not in Communist authoritarianism, but in pluralism and the close connection between personal freedom and prosperity.

President Xi Jinping would do well to take the opportunity offered by the handover's 20-year anniversary to reaffirm China's commitment to the joint declaration -- and then to follow through on that affirmation. As for the rest of the world, we should watch closely what happens in Hong Kong. If China's leaders break their word in Hong Kong, how can we trust them in other areas? (©2017 PROJECT SYNDICATE)

Chris Patten, the last British governor of Hong Kong and a former EU commissioner for external affairs, is Chancellor of the University of Oxford.

Chris Patten, the last British governor of Hong Kong and a former EU commissioner for external affairs, is Chancellor of the University of Oxford.