Education itself must learn some lessons
Opinion

Education itself must learn some lessons

There never has been an attempt to adopt "best practices" from the successful schools into classrooms of the under-achieving. (Bangkok Post file photo)

As debates rage on about how to move national education reform forwards, globalisation has been transforming Thailand's learning landscape without the experts and administrators in charge noticing much.

The silo approach has made past attempts at reform impossible. Focusing too much on compartmentalising various educational sectors and levels has prevented us from seeing the larger picture of the panorama of education induced by external forces. We have been mired in the maelstrom of reform, but missing what world-class educational institutions are doing on the ground in spite of the restrictive and suffocating environment imposed by our own bandits at the Ministry of Education.

According to the Office of the Private Education Commission (Opec), as of June 2016 there are 166 international schools in Thailand. Some of these are producing "the best and brightest" students for the Ivy League and Russel Group universities in the US and the UK, and other prestigious universities in Europe, Australasia, Japan and China. 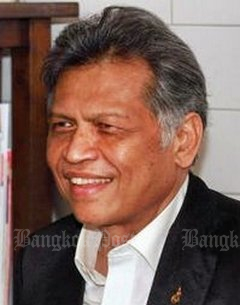 Surin Pitsuwan is a former minister of foreign affairs and deputy prime minister, the former Secretary General of the Asean and Chairman of the Board of Governors at Rugby School (Thailand).

While the best of secondary schools are here -- the likes of Triamudom Suksa and various demonstration schools of our top universities -- the worst and the mediocre are also cordoning themselves off with high fences and strong walls of resistance against any new ideas happening in global education.

This is reflected in the results of many educational surveys, global and regional, such as the Programme for International Student Assessment (Pisa), in which Thailand ranked near the bottom in Asia in 2016, and in the 2015 English Proficiency Index which surveyed 70 countries and ranked Thailand at No.62 -- way behind Singapore (12), Malaysia (14), Vietnam (29), and Indonesia (32), and only ahead of Cambodia (69) by seven points.

The results of a 2006 survey of 400 teachers of English, conducted in collaboration with the University of Cambridge, were alarming: "More than 60% had inadequate knowledge of English and teaching methodology, while the other 40% had passing knowledge and teaching skills, and 3% of those had reasonable fluency in English." And "some teachers were forced to teach English even though they had little or no knowledge of the language".

For mathematics and science, the picture is not any better, and indeed the trend is getting worse.

With the parallel existence of the best and the mediocre quality of secondary education institutions in Thailand, the big challenge is how to bridge this inequity gap within our national educational system. Foreign and affluent parents prefer to send their children to top-notch international secondary schools, leaving the majority of the Thai public to fight over seats in the better domestic ones, sometimes with exorbitant "tea money" being paid up front.

The problem is not that we do not have the right kind of education that would teach our students to be self-motivated, analytical, independent thinking and problem solving, for our international schools, with their own excellent curriculums and pedagogy, have proved that they are second to none, endorsed and recognised by the very best tertiary educational institutions around the world. Their products are prepared to acquire "21st Century skills" for change and transformation coming with quickening pace in all areas of their life in the future.

But it is curious that there has been no attempt to incorporate the best practices of the successful schools into the classrooms of the obviously underachieving ones. While not all the so-called "international schools" are among the best, many of them are at least acceptable and competitive. There is an obvious need for a platform of exchange and mentoring among our secondary education. There exists the International Schools Association of Thailand (Isat), but its stated purpose is only to "act as a link between its 45-member international schools, on the one hand, and the Ministry of Education and the Office of the Private Education Commission in particular".

It appears that the quality of secondary education in Thailand cannot be improved by the collective efforts on educational reform in the past two decades. In spite of the fact that one fifth of the annual budget is routinely allocated to the Ministry of Education, frequent changes in top leadership and "policy stability", as identified by the World Economic Forum, plus the characteristic impervious posturing of the educational policy establishment to external participation and contribution, have made educational reform agenda a miserable failure.

Given the fact that these excellent international schools are all incorporated under Thai law, taking advantage of the infrastructure and public utility made available by tax money, there should be a pro bono scheme that would encourage them to transfer their best practices to lesser equipped public schools.

With the high achievers in the central business district of Bangkok and now becoming more established in suburban areas, there is a wealth of opportunity to elevate the quality of education among our secondary schools both in the capital and in the provinces.

The global trend indicates that more international schools with English as the language of instruction are being established in most countries. In Southeast Asia and East Asia in particular, according to Nick Morrison of The Guardian, "many parents are seeking out an English-medium education that is seen as equipping their children to live and work around the world, as well as an inquiry-based approach to learning instead of the more didactic style favoured in some national systems".

Thailand, too, will see a rapid increase of new international schools moving on to the expanding landscape of middle-class families looking for a higher quality of education for their children.

What opportunity is available for collaboration and exchange between the "inquiry-based approach" being pursued as the global trend and the "more didactic style" of our national education?

Tapping available resources, hitherto unrecognised and under-utilised, is in itself an innovation. A forum of educators and educational management between the Isat and Thai public schools should be established. And the areas for collaboration and exchange could be numerous, such as administration, curriculum development, module preparation and lesson design, individual counselling and self-paced learning, including the pedagogy in science, technology, engineering and maths, and the imperative of English-language instruction.

As we embark full steam on the road to achieve the Thailand 4.0 economic model, all will come to naught if our education system is left in the quagmire of mediocrity and paralysis as a result of self-pride and insecurity. Our in-house educational experts have tried for the past two decades but have not produced satisfactory results commensurate to the enormous national budget outlay and the number of personnel involved in our educational reform agenda.

The more-than 400,000 educational experts and teachers around the country want very much to contribute their best, but need a clear and stable policy for educational reform going forward.

It is high time to learn from the external actors who have achieved successes with their products being admitted into the top tertiary educational institutions around the world. Nothing succeeds like success, as the saying goes. The real challenge is for our education experts to open up with a sense of "philosophical humility" and the courage to admit that there are other best practice stories accomplished by others who might be willing to share their secrets of success for our own national educational reform agenda.