Myanmar's governing National League for Democracy (NLD) is focused on the Myitsone dam project. Yet attention also needs to be paid to the Salween dams which are an unfair deal for Myanmar.

In July 1997, exactly 20 years ago, the heads of Thailand's and Myanmar's government sat down to sign a Memorandum of Understanding (MoU) with far-reaching implications for Myanmar. This MoU outlined the construction of seven dams to be built on the Salween River. These projects were supposed to feature a total capacity of 22,000 megawatts (MW) -- 55% of Myanmar's total hydroelectric potential and almost five times the total capacity installed today.

Many in Myanmar are awaiting a decision by the NLD government on the controversial 6,000MW Myitsone dam, which will flood a vast area of 450 square kilometres in Kachin State. But the projects on the Salween Dams deserve just as much attention.

Most are "battery dams" -- dams with significant electricity exports abroad, four with exports to Thailand, two to China. For instance, 90% of the electricity of the 7,000MW Mong Ton dam in Shan state would be exported to Thailand. This project would thus send more hydropower across national borders than any other project in Southeast Asia.

Electricity exports can generate significant revenue for a government. Bhutan generates 40% of its total governmental revenue from the sale of hydroelectric power to India. This revenue, in turn, can be used to accelerate a country's development, such as via investing in the country's roads, schools or healthcare system. But contracts that govern the export of electricity need to be carefully negotiated to ensure that the projects are beneficial for the country the dam is built in and for the populations most affected by their construction.

The information available regarding the Salween dams suggests that this is an unfair deal for Myanmar and its people. For instance, Myanmar's government would receive electricity worth US$207 million (6.89 billion baht) from the Mong Ton dam annually, according to a study from Harvard University. But it could obtain up to four times more if contractual terms matched those of comparable projects in Nepal and Laos. The people of Myanmar are being ripped off by the Mong Ton dam project. 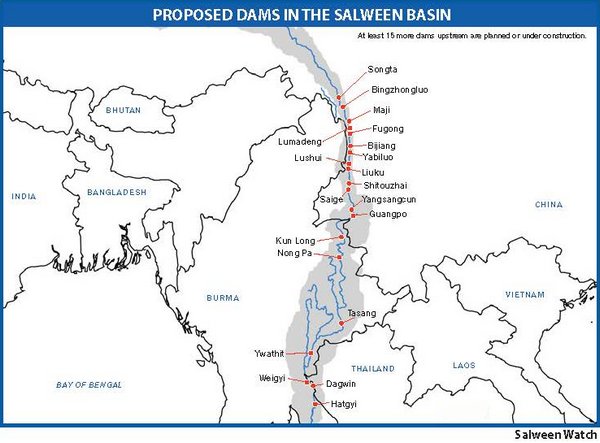 Little information has been released regarding the contractual agreements of the Salween dams beyond the Mong Ton dam so far, although the NLD government promised that it would be transparent. Confidential interviews with decision-makers in Myanmar's Ministry of Electric Power (MoEP) suggest that the contractual benefits of these remaining projects are also meagre. The renegotiation of these contracts is thus mandatory.

Once renegotiation of the Salween dam contracts has started, not only policymakers from Nay Pyi Taw, but also representatives from the affected local populations need to sit at the table.

The existing contracts largely ignore them. These will help ensure that project-affected communities are the project's first beneficiaries and that the largest share of benefits from these projects goes to affected local communities instead of the national government. This would be fair since these projects harm their territory and livelihoods.

The benefits must not only be financial, but also include significant amounts of electricity. The renegotiated contracts need to make clear that Myanmar will only export electricity abroad if its domestic demand is fully met. While the electricity of the Salween dams will not be needed in Myanmar immediately (or six to eight years from now -- this is how long the construction of many of these dams will take), this may change in 15 or 20 years if Myanmar's economy continues to grow at its current pace. The Salween dams are what we call "Damocles projects". This term reflects the constant threat that hangs over the villagers in the communities close to the Salween dams: the fear of resettlement.

Our research elsewhere has showcased that such Damocles projects create tangible negative impacts on communities. For instance, communities invest much less due to the fear of being resettled soon, while stress levels are particularly high. Planners must agree to reimburse communities for any negative planning phase impacts that occurred as part of the renegotiation.

This implies that thorough environmental and social impact assessments (ESIAs) are carried out for each of the seven Salween dams. Moreover, a Strategic Environmental Assessment that considers the projects' impacts from a river basin perspective is sorely needed. Several of the projects may be scrapped based on the results of these assessments if it becomes clear that their environmental, social and cultural impacts are too grave.

Contracts are often renegotiated when circumstances change, as they have significantly in Myanmar over the past 20 years. Developing Myanmar's vast hydropower resources can be an opportunity for the country's development. But this opportunity is currently not reaped via the Salween dams. A renegotiation of these projects is overdue and the 20th birthday of these projects may be an ideal point in time to start it.

Julian Kirchherr is assistant professor for sustainable business and innovation studies at the Faculty of Geosciences, Utrecht University, the Netherlands. Matthew J Walton is Aung San Suu Kyi Senior Research Fellow at the University of Oxford, United Kingdom. A similar version of this article was also published in The Frontier magazine in Myanmar.