The day after That Woman's closing statement in her malfeasance trial, national deputy police chief Srivara Ransibrahmanakul seemed painfully unhappy about something. He looked the way men with look with multi-day dyschezia or domestic dissimilarity. He said her approximately 900 supporters gathered at the court were well behaved "thanks to the 300 police" he ordered in.

But while he couldn't nail a single supporter for an actual crime, he has their transport dead to rights. He captured 21 taxi and van drivers who drove the fans to the court because they were not licensed to drive in Nonthaburi province where the court is. 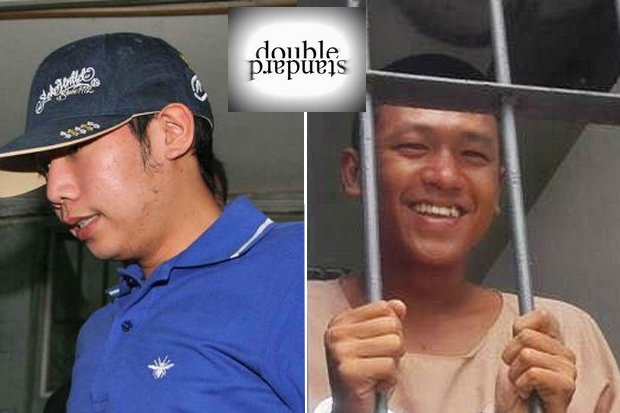 Left: 'Boss' Vorayuth of the mega-rich Yoovidhya family, accused killer of a policeman, current occupation jet-setter. Right: Jatupat Boonpattararaksa aka Pai Dao Din, the only one of 3,000 Thai people who 'liked' a Facebook post under arrest and charged with lese majeste. (File photos)

We'll take a break. Time for our weekly Definition Diversion, which has absolutely nothing at all to do with the rest of the story.

Back to the story.

Pol Lt Gen Srivara took 21 malefactors to jail. He mug-shotted and fingerprinted them. He released their full details in an extensive press release which noted that the dangerous scofflaws had violated Sections 27, 39, 128 and all-important 137 of the Land Transport Act of 1979.

They must be punished.

On Thursday, a break in the story of Napapa "Patt" Tantrakul, a B-list soap actress currently in a supporting role in The Saga of Mr X, who is the alleged Lao drug trafficking king Xaysana Keopimpha. Ms Napapa's B-list race driver and husband Akarakit Worarojcharoendet, aka "Benz Racing" and recent owner of a Lamborghini and hot motorcycle from Mr Xaysana, had been sending her massive amounts of money.

Police believe it was drug money -- no other explanation has surfaced so far. Prosecutors say there was no way the extremely attractive and polite Ms Patt could possibly be involved in money laundering. He was obviously just supporting his wife and new baby. Charges dropped.

On Thursday, the first witness hearing was held in the case of The Regime vs Jatupat Boonpattararaksa, aka Pai Dao Din. The prosecutors call him "that man who liked a Facebook post".

Which he did, of course. He fully admits it and it's there on the BBCThai.com website if you need prove it. The "like" was for a biographical news report. It's a report on which 3,000 other people in Thailand clicked like -- but aren't being prosecuted for lese majeste and computer crime with 30 years of free room and board at state expense in the balance.

That's a double standard. But the pursuit and persecu... we always get that word wrong, the prosecution of Pai is in stark, massive contrast to the case of a playboy and bon vivant from a family with 10 dollar billionaires. The chase doesn't even rise to the description of trivial pursuit.

The Yoovidhya family have been aiding and sheltering their precious Boss, birth name Vorayuth, for just under five years. His mother, brother and sister all have been photographed with him at Formula One Grand Prix events and at the front door of their home in London.

On Sept 12, 2012, (the charge sheet and unused arrest warrant say) Mr Vorayuth was a very naughty young man, hitting and dragging and killing a traffic policeman with his Ferrari.

For much longer than police have tracked and arrested Pai multiple times, and his mother once, police have neither tracked nor arrested nor shown any care at all about Boss.

By coincidence, on the exact day last month that Pol Gen Chakthip said he was eager to get his hands on Mr Vorayuth and not a single person believed him, the BBC's iPlayer began broadcasting the reality series Fugitives Cutdowns Edition. It follows and shows how special British and allied police teams track, apprehend and extradite wanted foreigners. They make it look simple -- apparently because it is simple.

In 2016, London's Metropolitan Police Extradition Unit arrested more than 500 foreign fugitives hiding out in the capital.

Pol Gen Chakthip and his crack headquarters staff didn't know where to translate a document into English and now are having a hellacious time figuring out where to send it. They could watch TV. Or try to find the phone number of the British embassy, a huge secret that is 02-305-8333.

Those are the standard ways. It surely is obvious to some and plausible to all the rest that if there were no double standards, there would be no standards at all.

Innovation is key to economic recovery

Cops must be role models