A country without clear rule of law is a nation adrift. Citizens have pride, patriotism but little control or input to their own country's future.

The general prime minister said from the start he wanted to take the country back to a simpler time, and events now taking place are the main part of it. The slogans and policies are in place. "Democracy isn't for everyone" and "Freedom of speech is a good idea but ..." and "Elections will eventually occur after it is clear peace can be assured". 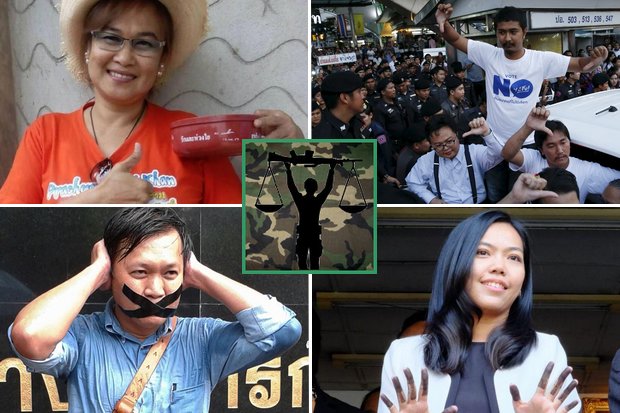 The question currently splitting the country as certainly as the trial of That Woman and the dispute over just exactly how rich and/or connected you must be to have a Licence to Murder is this: Is freedom from street demonstrations more important than freedom to host them or participate?

That's the current story from the current regime. Deputy Prime Minister and Defence Minister Prawit Wongsuwon, who knows more about staging successful coups d'etat and clutching power than almost anyone in the world, has just done an Orwellianism.

He has dispatched messengers around the world -- 27 military attaches and deputy attaches -- with instructions to change the story.

The May 22, 2014 putsch was not to reform government laws. It wasn't to bring about reconciliation. That old story is invalid, air-brushed as surely as a North Korean propaganda photo. It was merely an act of benevolence by the green shirts to stop red shirts and yellow shirts from mayhem and murder.

He ordered his subordinate officers to go abroad with a simpler version. "The May 2014 coup was an attempt to stop conflicts between two groups who were fighting each other."

What is factual is a lack of true reform that would bring freedoms and rights, along with a mass of new laws so great that no one alive can list them, let alone provide details. 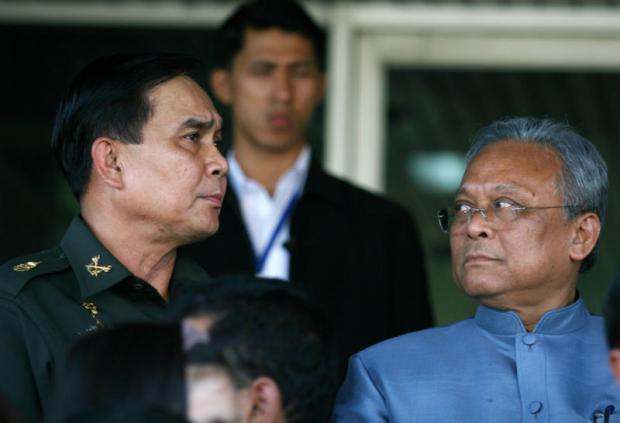 Benevolence: Gen Prayut Chan-o-cha probably had a strategic goal before 2014, although he has forbidden Suthep Thaugsuban from talking about it. (Photo by Chanat Katanyu)

There's a literally awful illustration of this process by the villain in Atlas Shrugged, written by the extremely weird libertarian/objectivist Ayn Rand. "One declares so many things to be a crime that it becomes impossible for men to live without breaking laws ... We want them to be broken."

To his credit, the prime minister had a strategic goal in 2014, and probably well before that, although he has forbidden Suthep "The Kamnan" Thaugsuban from talking about it. It was to establish, or actually to re-establish, the benevolent dictatorships of the past 85 years, and in particular those of 1932-73. But Gen Prayut knew new rules must prevail to successfully achieve the old order.

He cannot use the dungeons and torture chambers and secret police of Plaek and Khuang, Sarit and Thanom, Phin and Pote. Out: 20-year sentences for uppity newspaper columnists. In: 20-year sentences for liking a Facebook post. And sedition and lese majeste and defamation and, now, with 401 new laws in place and "a thousand more" to come, many other things.

It is not rule of law but, in the delicious phrase of Natapanu Nopakun in a daily newspaper, law of rules. And the world yawns. Example: Current opinion holds that no one should be tortured, where "torture" includes being invited by dictators for coffee or attitude adjustment.

But sedition charges? The world is satisfied if the police or army shackle, incarcerate and force a person to retain expensive legal help and tear up a family because it's justice. But it's unforgivable to give anyone a sharp-tongued talking-to.

Or as they put it in Western liberal circles: "Sedition charges? That's terrib ... oh, look, the tofu is organic and gluten free!" And did you hear about the worldwide outcry against the use of Section 112 for clicking "like" on Facebook? Yes, neither did we.

Here is the worst thing, literally the most horrible thing that has happened to the leader of the junta, law enforcement, the legislature and national policymaking, who all are one man. He has been invited to the White House in the United States to get the official stamp of approval from the reality TV star now called "Mr President".