The other side of the Mekong development debate
Opinion

The other side of the Mekong development debate

An aerial view shows the Pha Kan Tung, a group of small islets, which is part of the Khon Pi Luang rapids. (Photo by Sommai Iewprasert)

The pace has picked up since the middle of this year, when it was reported that waterway clearance by China was progressing into Thailand.

The Bangkok Post reported China's rock-blasting plan would damage the Mekong, and most recently claimed "the environment will never be the same".

I would like to present another angle on this issue to give some balanced perspectives to readers of the Post and other media.

I believe it is not a question of choosing economic gains over environmental protection or vice versa. At the Mekong River Commission (MRC), we live by the motto "meeting the needs, keeping the balance", which is endorsed by four prime ministers since their first MRC Summit in 2010. That is, development needs are legitimate, but they must take into account legitimate concerns of the environment and society.

The Mekong River is considered one the least developed and least spoiled of the major rivers in the world. The Mekong is used for cargo and passenger transport, immensely in the downstream stretches.

However, upstream navigability remains challenging. The upper Mekong is full of rocks, reefs and shoals that make navigation difficult.

In fact, experience and skilled boatmen can still navigate year-round in the upstream areas but the boats are generally around 50-60 dead weight tonnes (DWT) and specially designed to get through the rocks and rapids. Large-scale commercial boats cannot safely navigate the natural river. 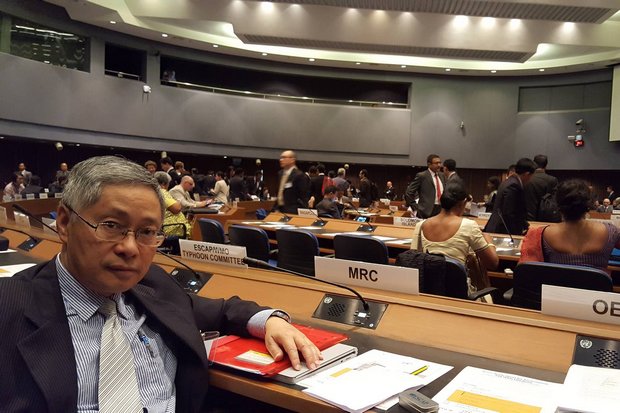 The terminology "blasting the rapids" which is occasionally used in navigation channel improvement documents and EIAs sounds extremely negative in comparison with the reality.

The reader is incited to understand that a huge amount of explosives is used to completely blow up the rapids, leaving only a deep gully from the explosion where ships can safely pass.

This is not true. The misunderstandings of different terminologies bring about uninformed opposition to development of navigation, which is the only way of transporting goods and cargo in a user-friendly and environmentally friendly way.

Also, such misunderstanding stems the desire for the authorities to return to road transport, which is by far the most polluting way of bringing goods and cargo from point A to point B, and stirs minimal or no objection from environmentalists.

Waterway experts have clearly proven that in most of the case studies, "clearing rapids" is barely a surgical intervention by which some rock outcrops and rocky river banks are chiselled (sometimes bedrock-deepened) and solitary rock outcrops in the navigation channel are removed and relocated. For the Keng Pha Dai rapids in Thailand, this is only 1.99% of the entire surface of the rapid that is "rock removed" or "blasted".

Claims that many fish die from the blasts and so many habitats are destroyed are not true either. In fact, the increasing use of high voltage electricity shocks that are now more frequently used by local fishermen to kill all fish within the operation area is the main source of destruction. But it happens unseen and goes unnoticed.

Some environmental reports torpedo waterway improvement for fish habitat destruction; but waterway experts claim that fish habitats are usually not in the immediate vicinity of navigation channels.

They are rather in the side channels and pools, well away from the disturbances of the boat engine. These areas are not even touched by any waterway improvement.

To conclude, we should all take a step back, reflect and view development in an objective and informed way.

Any development would need to consider and balance the economic gains, and the implications for the environment and people.

Plans that improve waterborne transport are in line with the MRC Navigation Master Plan and the regional trade and integration agenda of Asean.