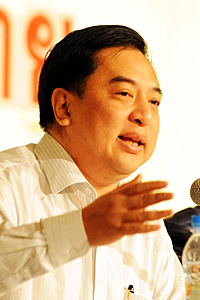 A demonstrator holds a placard in support of former prime minister Yingluck Shinawatra who was convicted was sentenced by the Supreme Court to five years in prison for dereliction of duty in connection with the rice-pledging scheme. (Bangkok Post photo)

Finally, the State Financial and Fiscal Discipline Act of 2018 has taken effect, despite criticism about the controversial clause that virtually bans populist policies. It is seen as an attempt by the ruling regime under the National Council for Peace and Order (NCPO) to limit the role of elected representatives in turning campaign promises into government policies. With that, a democratic principle turns upside down.

The law, via Sections 7-9, requires ministers to strictly adhere to financial and fiscal discipline and the cabinet must carefully consider costs and benefits, including risks and damages which could occur in managing finance and fiscal policies, planning budget expenditures and debt commitments. In addition, "the cabinet shall not administer the affairs of the state with the intent of creating political popularity which could cause long-term damages to the national economic system and the people".

The son of disgraced former government official Banyin Tangpakorn has denied any involvement in his father’s alleged plan to break from Bangkok Remand Prison.

Thailand will take until September to study whether to join a trans-Pacific free trade agreement, potentially missing a window for entry this year amid widespread concern that joining the pact may harm its farm and healthcare sectors.

RAYONG/AYUTTHAYA: Fisherman Anan Jaitang used to pile tattered nylon fishing nets on the beach after hauls of wriggling crabs tore them beyond repair, but most of the nets wound up in the sea, threatening to entangle turtles and choke coral reefs.