Can the media shed its polarised colours?
Opinion

Can the media shed its polarised colours? 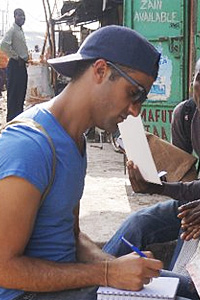 Thai media is robust, even raucous, but much of it remains brightly colour-coded. (File photo)

On his flight home to Bangkok in February 2008, Thaksin Shinawatra exhorted, "When the game is over, we must come together and settle our differences." Nearly 10 years later, regime leader Gen Prayut Chan-o-cha offered a similar plea: "[Thais] must talk to one another and find a way of uniting."

On this point, the two men share common ground. Indeed, if there is one thing most Thais seem to agree upon, it's that Thai society remains profoundly polarised.

Thailand can rightly boast of a robust and, at times, raucous media. National newspapers have long and proud histories. National broadcasters compete vigorously with one another. And increasingly, online platforms command wide-reaching audiences with analyses of current affairs. Still, much of the Thai media remains brightly colour-coded, reflecting a conflicted society back at itself.

In 2017, Freedom House, an independent watchdog, observed that the industry's politicisation is in recent years getting worse. "Most mainstream media and many journalists remain highly polarised," it observed. Consequently, "Thais have access to fewer viewpoints". Perceptions of red and yellow media have calcified divisions and narrowed political perspectives.

Is it possible for the Thai media to edge beyond its binary colours? As an election appears on the horizon, what should be the role of the national press?

Simply advocating for a "non-partisan" media is likely not enough. Just as the opposite of conflict is not non-conflict, the opposite of partisan is not non-partisan. Its opposite could better be described as interrogative: a media that leans into delicate but necessary discussions and helps its audiences do the same.

An interrogative press would reject being used to amplify political talking-points. Instead, it would question what's behind them, investigating what's driving Thailand's partisan divides. What are the unaired issues in need of public reflection and deliberation? Where are the fault lines beneath the country's political conflicts?

From 1990 to 2013, according to World Bank data, the share of national income claimed by the poorest 20% of the population fluctuated from a low of 5.4% to a high of 7.2. The next poorest 20% fluctuated between 8.5 and 11.1. These are small figures and narrow bounds. As Thailand advances towards high-income status, income distribution for those at the bottom of the economic pyramid isn't budging much.

By one recent measure, Thailand is the now the world's third most unequal country.

Over the past three decades, the incomes of the top 1% have grown at nearly three times the average. An analysis by economist Kobsak Pootrakool, the Minister Attached to the Office of the Prime Minister, found that the wealth of the country's 40 richest families doubled every three years between 2008 and 2014.

Among members of the National Legislative Assembly, average income in 2014 was equivalent to 32 times Thailand's per capita GDP. The French economist Thomas Piketty approximated roughly the same multiple between elites and the rest of the acien regime in Europe.

Issues like inequality are thorny ones. The societal stresses of inequality and debates on how best to ameliorate them raise legitimate disagreements. But these disagreements will rarely find peaceful resolutions without an interrogative media -- one that facilitates tough conversations on the under-girding reasons for the country's divisions.

This in turn raises the question: how best to do so? According to Amanda Ripley of Solutions Journalism, a non-profit outfit, journalists and editors reporting on complex situations tend to "look for coherence, which is tidy and natural." Instead, she claims, the media should aim to "highlight nuance, contradiction and ambiguity wherever you can find it." An interrogative media would not only lean into thorny topics, but also embrace their complexities.

Ms Ripley's assertion is buttressed by recent findings. The Difficult Conversations Lab at Columbia University studies how people with opposing viewpoints engage in dialogue. In one experiment, researchers gave each pairing of participants a news article on a polarising issue, like immigration. One version used a typical article: it laid out opposing viewpoints and supporting information. In another, the article relied on the same facts but presented a broad spectrum of opinions and engaged with more complexity.

More complex reporting, the lab found, yielded "more constructive and satisfying conversations, reducing the tension introduced by the [topic]." Participants asked more questions of each other; they proposed more ideas. The lab's director, psychologist Peter Coleman, noted that participants "don't solve the debate, but they do have a more nuanced understanding and more willingness to continue the conversation."

The impulse to reduce tension through simplification -- or avoid complex issues altogether -- keeps citizens in comfortable corners. A media that confronts difficult topics and embraces their nuances will not immediately solve Thailand's polarised problems, but complexity begets curiosity and creates space for new perspectives.

An interrogative media culture certainly has the cards stacked against it. Fanning partisan flames animates audiences and engenders loyal followings. Polarisation can be good business. But much depends on a media that assumes a greater responsibility; the stories we tell ourselves shape the scope of political possibilities we later entertain.

As Thailand looks ahead, the prospect for a less polarised society will require a media that helps to find a way towards it.

Grant Tudor is a Masters Degree candidate at Harvard University, pursuing dual degrees at Harvard Business School and the John F. Kennedy School of Government, and a Fellow at Harvard's Center for Public Leadership.

He most recently worked with the Centre for Humanitarian Dialogue in Thailand, facilitating dialogue among media actors and civil society organisations on issues affecting the media industry.

Grant Tudor is a Masters Degree candidate at Harvard University, pursuing dual degrees at Harvard Business School and the John F. Kennedy School of Government, and a Fellow at Harvard's Center for Public Leadership.

He most recently worked with the Centre for Humanitarian Dialogue in Thailand, facilitating dialogue among media actors and civil society organisations on issues affecting the media industry.