Last month, Asia Times, citing unnamed diplomatic sources, reported that China has lobbied Cambodia for a naval base in Koh Kong province on the Gulf of Thailand, prompting the Cambodian government to deny the news.

A Chinese naval base in Koh Kong or in any coastal area inside Cambodia would greatly damage the current state of excellent Asean-China ties and jeopardise China's many regional and global schemes, including its Belt and Road Initiative (BRI).

Bilaterally, it would also increase tensions with Cambodia's neighbours, especially Vietnam and Thailand. In the long run, it would increase the great powers' competition in the region and further endanger the strategic balance that has been in force since the end of World War II. After all, Southeast Asia remains stable and prosperous because there has not been any dramatic shift of great power relations as in other regions.

Indeed, his robust denial must be seen in the context of Cambodia-Vietnam relations as well as in relation to Asean. Their ties are complicated and mostly driven by domestic concerns. However, external factors are becoming more influential as major powers view Cambodia as a catalyst they can engage. Just scrutinise the way Hun Sen has handled all threats and pressure from the US and EU, vowing to cut preferential trade privileges.

As far as the two neighbours' ties are concerned, past descriptions of their friendship as "traditional" or "fraternal" are quickly fading away these days. In past years, nationalism and anti-Vietnam rhetoric were on the rise in Cambodia, especially among the supporters of former opposition leader Sam Rainsy, who is now living in exile.

However, after the recent electoral sweep by Hun Sen's Cambodian People's Party, the situation has greatly improved, paving the way for Hun Sen's trip. Today, Cambodia-Vietnam relations are reciprocal and realistic. Both sides continue to work on stinging cross-border issues including border demarcation and the protection of local Vietnamese residents. But lately the protection of Vietnamese businesses has become a priority. 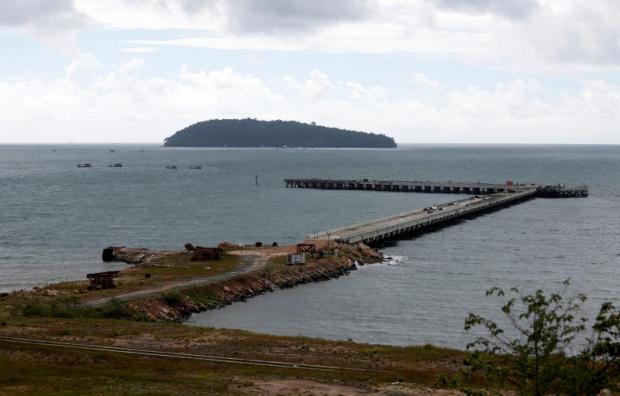 A port is seen in an area developed by Chinese company Union Development Group at Botum Sakor in Cambodia's Koh Kong province. Asia Times reported last month that China has lobbied Cambodia for a naval base in Koh Kong. REUTERS

Since the 1991 Paris Peace Accords, Vietnam and Cambodia have pursued an export-oriented strategy that has propelled their respective economic growth to new levels. However, ties were tested when Hun Sen decided to forge closer ties and cooperation with China in 2000. His political instincts paid off. After nearly two decades, the Middle Kingdom is now Cambodia's largest investor and aid provider.

Naturally, Vietnam, which backed Hun Sen against the Khmer Rouge, has not been happy with the new shift. But the current Vietnamese leaders are pragmatic as they see him as the only man who can bring continued stability and economic progress to Cambodia. During Hun Sen's visit, Vietnam highlighted the longstanding tenet of Cambodia's foreign policy that professes "permanent neutrality and non-alignment as well as co-existence with its neighbours and other countries".

Hun Sen used his Vietnam visit to send a strong signal that Cambodia's constitution does not allow the stationing of foreign troops. That much was clear for the time being. Any Cambodian attempt to alter the strategic balance in dramatic ways on mainland Southeast Asia would be highly controversial and would strain its relations with Asean.

In private, the Thai security apparatus does not believe Cambodia would do that. Nor is it in Beijing's interest to set up a new military outpost in the Gulf of Thailand while pursuing continued economic progress and increased international cooperation with Asean on the BRI.

Not far from Koh Kong, Thailand has a comprehensive military base in Chon Buri. Since the US withdrew its troops from Thailand in 1975, it has continued using the Thai military facilities for logistics and other military backup for US operations in the Middle East and beyond. Efforts to open these facilities for port calls and commercialisation have been slow because of strategic considerations. Vietnam has recently transformed its famous Cam Ranh Bay into a modern port facility. This former US and Soviet naval base is now a popular tourist spot, with port calls by foreign warships.

From China's perspective, at the moment there is no need to build an extra naval base in mainland Southeast Asia, as it would bring more harm than benefits.

At this juncture, Asean-China ties have improved markedly after six years of on-and-off tension over the judicial challenges on the South China Sea between the Philippines and China under the Aquino Administration, as well as other conflicting parties.

Both sides are now working on drafting a code of conduct for the South China Sea, which is expected to be completed in 2021. They have already implemented a series of confidence-building measures including an early warning system through hot lines and exchanging information.

By no means does Beijing want to rock the boat with Asean.

Truth be told, any China military base in the Gulf of Thailand would push Asean-China relations onto the back burner. At the Singapore summit last month, their leaders signed the Asean-China Strategic Partnership Vision 2030, which outlines comprehensive programmes to promote security and economic cooperation.

This vision, which took two years to complete, is a sacrosanct document guiding the grouping's most important bilateral relations. At least for now, Beijing prefers to focus on consolidating ties with Asean, as well as with other Mekong countries.

In the long run, China also needs to synergise the BRI with the Asean Masterplan for Connectivity 2025. Both sides have discussed it, but have not yet worked out a common plan.

Individual Asean members have already taken dozens of infrastructural projects under the BRI. Any disruptive scheme, such as a new naval base, at this point would distract or even derail these burgeoning enterprises in that part of the world.