The 2018 Credit Suisse Global Wealth Report has forced the government to admit the country has a problem of financial income inequality.

The latest annual Global Wealth Report by Credit Suisse (CS) ranked Thailand as one of the countries with the highest rates of economic inequality, stunning many people, including policymakers.

After the report came out, the government argued the bank used old and irrelevant information. It also tried to sell the argument that such a financial disparity is not abnormal. Even advanced countries with good economies can have a big socio-economic gap.

Decharut Sukkumnoed, PhD, is the head of Kasetsart University's Agricultural and Resource Economics Department. The article is based on his recent interview on the 'Thai Voice' news programme.

The National Economic and Social Development Board (NESDB) and a spokesperson for the government cited different figures to counter the report. They showed that in terms of its income gap, Thailand ranks "middle to high".

However, the CS report focused on assets, something the other set of statistics chose to overlook. In presenting its argument, the NESDB and the regime stopped short of saying what it considered to be an acceptable level of disparity in terms of asset ownership.

Their inability to issue a clear statement may derive from the fact that the authorities have never systematically studied this before. Without such data at its disposal, the state can hardly set a goal for how to bridge the gap.

It should be noted that CS uses data from the Bank of Thailand in its analysis. That should be reliable enough. If the gap in asset ownership is included, the disparity would be worse.

In fact, we should appreciate the value of the CS report as it helps us realise the need for a policy review. The state must work on procuring asset-related data to tackle the problem strategically.

It should be alarmed that the ranking is up, with a much wider gap compared to 2016. What concerns me the most is that the country has no data of its own. The state should start working on resolving that immediately.

Generally speaking, there are gaps in three areas: assets, income and opportunities. All three are inter-related. The "opportunity gap" refers mostly to people from poor families due to their limited access to education, which amplifies their chances of remaining mired in poverty.

Those with a certain level of income have a higher chance of accumulating wealth, but one could argue that the asset gap best reflects the difference in people's fortunes. Meanwhile, the more wealthy people are, the higher the likelihood of them pulling in more income. For instance, landowners with property in prime areas can use that commercially for profit. As the country does not have a well-developed welfare system, this fuels the gap in available opportunities. By way of illustration, poor students can finish their mandatory education with state support but they cannot enter university because of the high tuition fees. As a result, they struggle to land a well-paying job later in life.

We are on the verge of entering an era where these financial disparities permeate several generations instead of just one, meaning the son of a poor father is also likely to grow up to be poor. An old Thai legend tells of a man who gradually amassed his wealth in a piecemeal fashion, almost from nothing. But that is no longer valid. A recent World Bank study said the opportunities for the poor in Thailand to build wealth are very slim compared to other countries around the world. 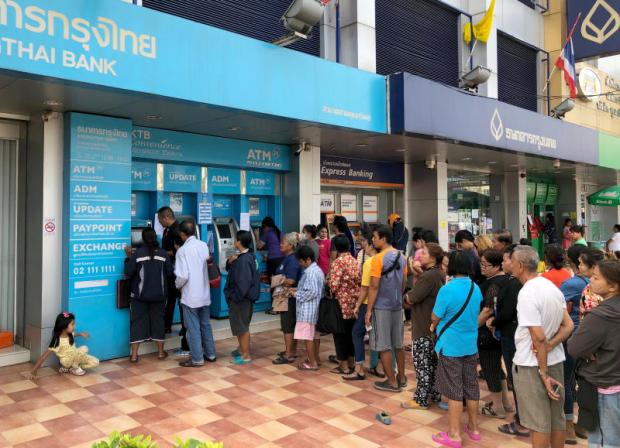 Welfare card holders queue up at a Krungthai Bank ATM booth in Pathum Thani this week to withdraw 500 baht given to them by the Prayut Chan-o-cha government 'as a gift'. (Photo by Sarot Meksophawannakul)

State policy has also had an adverse affect on the distribution of opportunities. Almost every Thai government has done little in terms of getting a handle on asset distribution. The country has a progressive income tax, but it also offers very generous tax exemptions for the mega rich.

It can also be said that no Thai government has paid serious attention to asset distribution. When the military regime took office four-plus years ago, there was hope of a land tax law being implemented. But it was eventually watered down. Now that some political parties have started talking about taxes for SET shares, we will have to wait and see how this plays out.

Regarding the opportunity gap, we could bridge the disparity with a better welfare system to ensure children from poor families can access this, which would increase their exposure to opportunities and put them on par with children from rich families. It is unfortunate the regime has scuttled this somewhat by reducing the level of state support for mandatory education, from 12 years, to Mathayom 3; at the same time, it has limited the eligibility of people to access universal healthcare (UHC).

The military regime has spent more than 100 billion baht on assistance packages aimed at eradicating poverty. But when this sum is divided by the number of recipients, we can see there is no real impact; it's not enough to substantially narrow the income gap. Their lives and lack of opportunities remain the same. If the same amount were used to set up a more comprehensive welfare system, it could make more of a difference. In short, if we want to bridge the income gap, we have to tackle the other two gaps, too.

It should also be noted that land assets are not limited to farmland, or the residences of city dwellers, but also include land plots that city vendors use to make a living. The rent for such plots is usually very high, often accounting for more than 50% of their profit. This asset gap could also be tackled with the right measures and taxes.

In fact, the land and property tax could be seen as the most lenient measure. Some countries and states, like South Korea and Taiwan, place limits in land ownership, which means the state can buy large tracts of land and distribute it to the poor.

Tax is useful in that it can force landlords to give up some of their unused plots. Tax also provides money for the state to buy the land and allocate it to the poor, while a more progressive land tax can discourage the wealthy from accumulating excessive amounts of land. However any such tax must be genuinely progressive, meaning all individual plots must be calculated and properly taxed.

That leaves much work to be done, and better taxation is just the starting point.

But, as we can see, the state's current land policy does little to benefit poor, landless farmers. For example, the government has vast areas of land in the South that are available for rich palm planters to rent, but beyond the means of most poor farmers.

Moreover, Thailand's income tax structure does not benefit lower-income earners, given that the bulk of revenue comes from "indirect taxes" like value added tax (VAT) and the excise tax. Therefore, consumption-related taxes for the poor are relatively high, which further bleeds them of the chance to save money. In contrast, studies show that the wealthiest 20% of the population only use 40% of their income on average, leaving the bulk to be saved or invested for further future accumulation.

The wealthy also appear to benefit more from state expenditure. Taking the issue of education as a case in point, only children from richer families can afford a good university education, which is still prohibitively expensive despite the introduction of state subsidies. It's the same with healthcare. Even though everyone can theoretically benefit from the UHC, impoverished people who live in remote areas still have limited access to this service.

The bigger gaps can be partly blamed on a substandard welfare system, and the situation looks primed to worsen amid some of the lowest farm prices in recent years.

This is because roughly 60% of the nation's poor work in the farm sector, while many others have suffered this year from a daily minimum wage freeze. And while the poor see their income dwindle, rich investors benefit from tax privileges and promotional packages that, for example, free them from the constraints of town-planning measures.

The regime has put in place several programmes for lower-income people. Some are noble in principle but contain flaws when translated to practice. For instance, the 600-baht allowance for mothers with young kids is good news for them and their toddlers, but eligibility is limited to women with a certain monthly income.

My argument is that 3,000 baht is too low. We can't simply say women who earn 5,000 baht are rich and need no help. Due to such conditions, 30% of women in this group are excluded.

Moreover, in implementing the Pracharath scheme, the regime pinned its hopes on wealthy tycoons' expertise to help the poor in accordance with the trickle-down economic concept. Yet, what happened was that it was those businesses that prospered with a bigger share of the benefit.

I think the state must invest more in bridging the opportunity gap, targeting two groups: the elderly and young, low-skilled workers, who are set to lose out in the wake of rapid technological change.

Regarding asset distribution, I think most political parties are still too vague. Worse, they seem to see it as a way of maximising the clout of their political networks.

This is a crucial issue and one that could explode into a national crisis in a short period of time.

Regarding asset distribution, I think most political parties are still too vague on what they want. I hope the politicians can transcend their differences.

Otherwise, this could soon develop into a much bigger problem.

Decharut Sukkumnoed is an independent economist. He was also a lecturer at Kasetsart University's Faculty of Agricultural Economics. He is known for his role as a social critic.