Millennials will have to get off their seats and go to the polls in India, Indonesia and Thailand - and political parties are responsible for getting them there. (File photo)

In the first half of 2019, a billion Asians will elect the next leaders of the region's two largest democracies. Half -- 400 million in India, and 79 million in Indonesia -- are from the millennial generation, born roughly between 1982 and 2001. Many will cast ballots for the first time. Although the threat of sectarian hatred looms large over both the Indian and Indonesian elections, economics will still take centre stage.

The issue that will resonate most with younger voters is jobs.

Indonesia's President Joko Widodo will seek a second term on April 17, promising to "re-industrialise" the economy. The commodity boom that helped ameliorate high unemployment after the 1998 Asian crisis has faded. Without pushing into large-scale manufacturing and adding more value to the country's raw-materials exports, it's hard to see how municipalities with 9%-plus joblessness in West Java can close the gap with the national average of around 5%.

Jokowi, as the president is known, wants to keep spending on infrastructure, even though foreign direct investment is set for its first annual decline since he came to power in 2014. But his opponent, the former general Prabowo Subianto, is striking a more nationalistic pose by vowing to review Chinese belt-and-road investments if he comes to power. Mr Prabowo's solution for attracting more private investment is to slash taxes and government spending.

Lack of jobs and widespread agrarian distress are also the main campaign issues for Indian opposition leader Rahul Gandhi. He's looking to unseat Prime Minister Narendra Modi over his disastrous currency ban and a botched goods and services tax -- moves that have hurt small firms and their workers disproportionately. 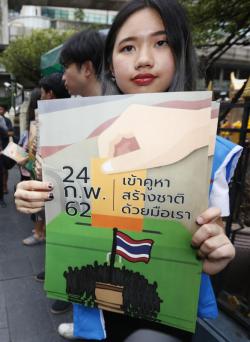 An activist shows large pamphlets, during a campaign in Bangkok in Septermber, urging people to vote in Thailand's general election next year. (Photo by Pattarapong Chatpattarasill)

Since it's politically suicidal to cut fuel subsidies in an election year, both Mr Modi and Mr Jokowi will hope global oil prices stay low. Indonesia's cash handouts to the poor will double in 2019. But with revenue growing strongly, the budget deficit is still expected to come in below 2% of GDP.

The same isn't true for India, though. Encouraged by his party's wins in recent state polls, Mr Gandhi is putting pressure on Mr Modi to waive farmers' loans. Meanwhile, the prime minister is wooing the middle class by pruning the list of items taxed at 28%, the highest of the five GST rates. Even without the additional burden, the budget deficit in the fiscal year ending in March would struggle to meet the goal of 3.3% of GDP. Elections will be held by May.

For both countries, the biggest "known unknown" of 2019 is the US Federal Reserve's policy. If the Fed takes a pause only after three interest-rate increases in 2019, the Indian rupee and the Indonesian rupiah could remain under pressure.

In Indonesia, the risk is from the current account deficit, which at about 3.4%of GDP is already large. With prices of palm oil and natural rubber slumping, exports may be slow to revive. In India, an abrupt change of guard at the central bank could lead to more relaxed financial conditions to stoke credit-fueled growth ahead of the elections.

If the Fed sets the backdrop for the 2019 Asian polls, Facebook Inc could determine their tone, even outcomes. Analysts are dreading a repeat of the role social media played in securing a victory for far-right presidential candidate Jair Bolsonaro in Brazil.

India has seen lynchings triggered by the fake news circulating on WhatsApp, a messaging service owned by Facebook, which has 250 million users in the country. Meanwhile, Indonesian Communications and Information Technology Minister Rudiantara had previously spoked about social media firms' slow and inadequate response to requests to take down offensive content. A third of Indonesians use Facebook.

How a billion Asian voters navigate around misinformation and a hardening of majority sentiment against minorities (Indonesia's ethnic Chinese and India's Muslims) on their way to the polling booths will be worth watching. There will be a third important Asian election next year.

Thailand's military junta, in power since May 2014, has decided to hand over power in polls scheduled for Feb 24. Considering that elected leaders keep getting unseated by the courts or the army, a durable democracy in Thailand would be a huge positive for investors.

At this juncture, though, that may be too much to expect from 2019. - BLOOMBERG OPINION

Andy Mukherjee is a Bloomberg Opinion columnist covering industrial companies and financial services. He previously was a columnist for Reuters Breakingviews. He has also worked for the Straits Times, ET NOW and Bloomberg News.