Why the capital needs to get smarter
Opinion

Why the capital needs to get smarter

Bangkokians have been suffering from serious smog episodes over the past month, with the wearing of face masks becoming the norm. While the root causes of this health-threatening and unpleasant phenomenon are many, one of the culprits is the high number of vehicles plying the city's thoroughfares, and chief among this is the use of private cars.

The automobile, while providing transport convenience, is a rather inefficient piece of machinery. A typical small car usually weighs at least a tonne, or 1,000kg. Assuming there are two persons, weighing 100kg in total, riding in the car, for a combined weight of 1,100kg, the efficiency of the car in transporting both people is merely 9%. The remaining 91% of the energy is used to move the car itself! And with much heavier cars and only a single driver, the rate of efficiency is even worse.

Therefore, if such cars are stuck in standstill traffic conditions, which is quite common in Bangkok, and yet with engines turned on, guzzling fuel with little if any movement and yet spewing pollutants into the atmosphere, endangering public health and adding carbon dioxide and other greenhouse gases, thus contributing to climate change, then such an activity must be considered as the height of human folly and a real disservice to society at large.

So, if one is to act smart at all, then the automobile should only be used sparingly and only when necessary. Plus, this new norm would evoke a more egalitarian and community spirit by joining with the masses in public transport, and thereby help to reduce class disparity, as exemplified by the leaders of some countries.

The Thai government has admitted vehicles are a major contributor to air pollution in Bangkok. This problem must be addressed resolutely if we are going to see any significant improvement in the city's air quality. To achieve this, viable transportation alternatives which are more environmentally friendly, efficient, accessible and affordable must be made available urgently to incentivise people to switch to such modes of transport systems.

By the same token, certain restrictions on car usage must also be implemented. Moreover, regulatory agencies need to redouble their efforts to clamp down harshly on any sources of air pollution exceeding set standards, and related offences.

Bangkok was designated by the Thai government as a city under the Asean Smart Cities Network last year. However, what is apparently being showcased here is the mass transit hub under construction at Bang Sue, which is only one aspect of a multi-dimensional framework for a smart city.

What is lacking is a more holistic approach to what a smart city should be, including not only built infrastructure but also a range of other components including environmental quality, health and well-being.

This just goes to show that some mindsets are still stuck in siloed approaches and not yet shifted to more lateral thinking that could more effectively address the multi-faceted challenges of sustainable urbanisation.

In fact, the Bangkok Metropolitan Administration (BMA) already has strategies to make the capital become a more resilient city and to drive it forward in the Asean context, which includes multi-dimensional considerations, but somehow this is not incorporated under the Asean Smart Cities Network framework.

Furthermore, Thailand only assumed the chairmanship of Asean last month. It plans to organise hundreds of meetings throughout 2019 with the theme of "Advancing Partnership for Sustainability". While this is indeed a very appropriate catchphrase, the month-long smog episodes hitting at the heart of the kingdom's capital must come as a surprise wake-up call, and an early warning of what could arise from so-called "non-traditional security" threats that could easily create difficulties for, if not derail, Thailand's effort in hosting its numerous meetings, many of which would be in Bangkok. 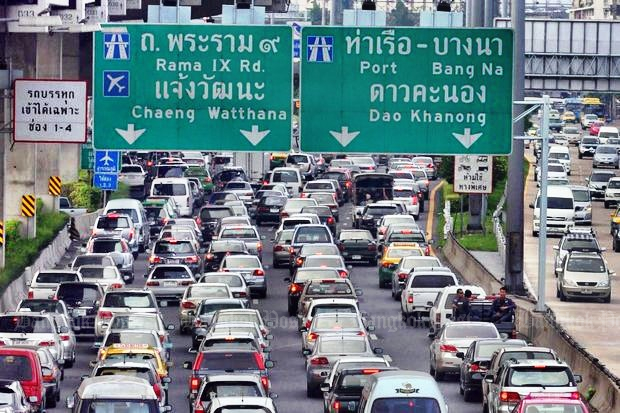 Ten lanes are not enough. As vehicles are a major contributor of air pollution, they represent a problem that needs to be addressed wholeheartedly and aggressively. (File photo)

Pollution of air, land and water, coupled with unusual weather and climate conditions and resulting in excessive flooding, droughts and heat and cold stresses could pose such non-traditional security risks.

As even our government authorities have pleaded recently, all Bangkokians would need to help make Bangkok and Thailand "great again" in its various dimensions, especially as the capital city and the kingdom play host to our various Asean and non-Asean guests in the remaining months of this year.

Thai hospitality is world-renowned. But that would be severely hampered if some of our places are blanketed by thick smog, creating breathing and other hazards; not to mention, how would Thais be able to display their legendary "Land of Smiles" welcome when we need to cover ourselves with face masks like hospital patients, or victims of an epidemic.

As there will be an election in Thailand soon, would any of the political parties and prime ministerial candidates vying to be in the future government put environmental issues up front in their platform or manifesto?

Environmental considerations have usually taken a back seat in global discourses including in Southeast Asia, where economic development has taken undue precedence.

It is also sad to note that the 2016-2025 Asean Strategic Plan on Environment remains probably the only remaining sectoral plan under the current Asean Community Vision 2025 blueprint that has yet to be formally endorsed for implementation.

Asean also has in place a roadmap to achieve a transboundary haze-free Asean by 2020, ostensibly from land and/or forest fires. One of its indicators is an increase in the number of days with good or moderate air quality. This remains a serious regional challenge.

If Asean truly considers sustainable development as its core value and wants to seek support and cooperation from its various stakeholders within the region and beyond, to tackle region-wide environmental matters more seriously, one of the key priorities during this year's Asean chairmanship should be to get the 2016-2025 Strategic Plan on Environment off the ground by 2020 at the latest. That is the half-way point of the plan's intended duration.

Better late than never, and if the aforementioned theme of Asean under Thai chairmanship, Advancing Partnership for Sustainability, is to at least have some meaningful resonance.

Thailand also intends to launch the Asean Centre for Sustainable Development Studies and Dialogue later this year. It appears the centre has its work cut out already. Let's hope it can achieve reasonable results in the foreseeable future.

A humanitarian crisis by the Salween River