Autocratic bureaucracy is killing us
Opinion

Autocratic bureaucracy is killing us

Big business won. Again. We should not be surprised nor disappointed at the government's decision to support the weed killer paraquat which poisons the environment and makes us sick. We should be angry.

We should not be angry at only the decision by the Industry Ministry's Hazardous Substance Committee to allow the use of this toxic farm chemical, which has already been banned in 53 countries around the globe. This shameful decision is only a symptom. We should target the illness itself -- the closed, top-down officialdom which is not transparent nor accountable to anyone but the mandarins' own bank accounts.

For even if public pressure succeeded in banning this highly hazardous weed killer, these arrogant autocrats will still continue to produce more laws and rules to serve their bosses -- not us taxpayers -- at the cost of public good.

They will do so because they can.

The present law-making system allows state agencies to draft laws involving their jurisdictions regardless of conflict of interest. And without public participation. This allows the autocratic officialdom to set harmful laws and rules single-handedly to empower and enrich themselves.

We should be angry at this non-transparent and unaccountable system which breeds horrific corruption and produces oppressive laws.

Equally maddening, if not more, is that these opaque state agencies also have the power -- under the law they wrote -- to punish people who get in the way of their benefits which, more often than not, go hand in hand with big business.

Just look at a few megaprojects and bills that various state agencies are pushing before the military regime makes an exit.

The Irrigation Department, for example, is pushing for dams and reservoirs which will destroy pristine forests, local ecosystems, and displace a large number of people.

The Department of National Parks, Wildlife, and Plant Conservation, meanwhile, is pushing for a set of forest laws to tighten total control over protected forests.

If the draft laws get a green light from the junta-appointed National Legislative Assembly, millions of forest poor will face exorbitant fines and imprisonment just by collecting mushrooms or other edible plants. The same with raising cattle, which is part of the forest dwellers' way of life.

At the same time, the new bills will empower officials to enjoy national park entrance fees, without having to return them to the national coffer. Under the non-transparent system, we know what is going to happen.

Forest officials have long wanted to evict indigenous forest dwellers and local communities in forest lands. The new forest bills will make it easier for them to do so.

Ironically, forest authorities continue to allow investors to clear secondary forests for massive palm oil plantations. They also turn a blind eye on mines, dams, and road projects that destroy the forests. Meanwhile, they continue to build more facilities to welcome tourists and their money.

The rice bill is another case in point.

What is fishy about this bill is that it did not come from rice agencies, but a group of 25 National Legislative Assembly members who succeeded in pushing the draft at lightning speed.

Imagine, a group of only 25 people having the power to control the rice industry and rice farmers across the country without having to consult them.

What is the motivation? Why the rush? Why the secretive procedure?

The same answer goes with why the Irrigation and National Park Departments are pushing their top-down laws at the same time. 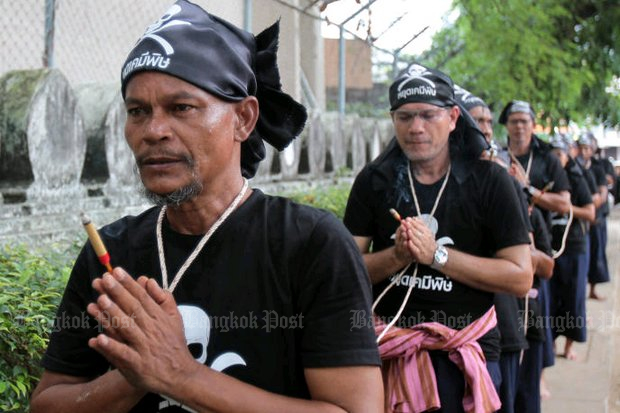 Activists perform a ritual as part of a protest against government-approved pesticides such as paraquat and chlorpyrifos. (File photo by Tawatchai Kemgumnerd)

The autocrats are panicking because the military regime is on the way out. During the past five years under military rule, the officialdom has become all-powerful, with support from armed men to crush opponents of their schemes.

Although the next government is likely to consist of members of the pro-junta camp, it still will not be as easy to push for controversial laws and projects. So the autocrats want to make sure they have their pet projects now.

If the rice draft bill gets a nod from the NLA, the Rice Department, now mainly a research and development agency, will become a powerful regulator of the rice industry that controls both zoning areas and seed varieties registration. Rice farmers are concerned. And they should be.

According to the original draft, all rice varieties must be registered with the Rice Department first before they could be sold. This will hit indigenous rice varieties hard.

Small communities are now the protectors of more than 2,000 indigenous rice varieties with important health and pest-resistant qualities. They grow, develop, and sell their rice grains to other communities. That is the way rice grains are traditionally developed to protect rice biodiversity.

These small communities do not have the resources to register their rice varieties with the officialdom. And what if they do only to find out that some agro giants have already registered them? What if they face exorbitant fines and imprisonment for unknowingly growing and selling the rice varieties already patented?

This has already happened with corn farmers in Thailand. There's no reason why it will not happen to rice farmers too. Thanks to the public outcry, the controversial clause on farmers' punishment has been reportedly lifted.

One of the bill sponsors insisted such fear is unfounded. But the details of the draft continues to be out of reach of farmers and on a fast track for NLA approval. This is unacceptable.

The same with the decision of the Industry Ministry's Hazardous Substance Committee on the weed killer paraquat.

Despite abundant research and evidence on paraquat's danger to public health and the environment, the Hazardous Substance Committee insisted it is not enough.

Such blatant refusal to heed scientific proof raises many questions. First of all, why is the decision on toxic farm chemicals with serious impacts on public health with the Industry Ministry, and not the Public Health Ministry?

Given the closed law-making system in this country, agencies entrusted with decision-making power decide themselves who they will serve. When the Industry Ministry is in charge with making the paraquat decision with support from the Department of Agriculture, which backs chemical farming, we know the farm chemical industry will win even before the battle begins.

Biothai, the main civic group campaigning for a ban on paraquat, demanded to know the committee members' voting decisions. The answer is a big "no", because such demands attack the heart of the power of a centralised bureaucratic system.

The top-down closed system enables autocrats to draft any laws or set any rules with power to enforce them nationwide. It also helps them to hide shady deals. Revealing names is therefore not permissible; it may set precedents and shake the system based on non-transparency to the core.

With the forthcoming general election, we should realise that the ballot-box game without decentralisation may give us more voices, but it won't change the name of the game.

Without decentralisation, the top-down, autocratic bureaucracy will remain non-transparent, unaccountable, and corrupt. Without bureaucratic reform, the mandarins will continue to poison our environment, make us and our children ill, and weaken the country to no end.