Scum of the Earth
Opinion

Scum of the Earth

A Thai flag is seen on barbed wire at the scene of a 2014 protest on Ratchadamnoen Nok Avenue.

At the Bangkok Post Forum on Feb 7, Future Forward Party leader Thanathorn Juangroongruangkit said it would be splendid if Thailand had green shirts with four stars who favour democracy. He called for a review (English translation: cancellation) of the recent, 2.3 billion-baht purchase of 14 more Chinese main battle tanks. Oh, and Thailand should halt conscription.

The NCPO (junta) ordered the Judge Advocate-General division to get busy. Mr Thanathorn was indicted for criticising junta members. Not at the forum, but last June, on Facebook. Reminder: The NCPO commander is Gen (Ret) Prayut; his secretary-general is Gen Apirat Kongsompong, the army commander.

A week ago today, again on that treacherous Facebook, Khunying Sudarat Keyuraphan called for a 10% cut in the military budget, with the savings put into the campaign to save the unicorns. Pheu Thai also suggested that the bloated corps of Thai general officers -- possibly the greatest per-soldier ratio in the world -- could stand a substantial pruning.

That brought choler to Gen Apirat, with full support of his boss, the general prime minister. The army chief ordered incessant blasting across airwaves and military tannoys throughout the country, of the 1976 ditty Nak Phandin. Musically, the song has a familiar nationalist style, but it falsely claims to be patriotic. It is a call to war against army-designated enemies.

The title is literally "Weight on the Earth". "Burden on the Land" is also used. In context, though, the sister English idioms are "Oxygen Wasters" and "Scum of the Earth". In context: those who don't know their place, who think they could ever match the rightfully destined leaders.

The Office of Blurring in the Department of Airbrushing, Royal Thai Army Propaganda Battalion, got away last week with claims that Nak Phandin was a song referring to the fight against the jungle-based, Chinese-supported Communist Party of Thailand. In the word of Dwight K Schrute, "False!"

The attempt to frame the song as a heroic anti-communist anthem is, as Orwell noted, a claim so equinely excrementitious that only an academic could believe it. It never mentions "communist".

Here is Nak Phandin's vital role in the crucial seven months of the rightist campaign to recover their power lost to the student-led, citizen-supported revolution of Oct 14, 1973. Maj Boonsong Hakritsuk, a signal corps officer doing propaganda at the army's Channel 5, wrote what he told a reporter at the time was the patriotic Nak Phandin because of his personal "fear of the battle by the left wing to take away support of the people". 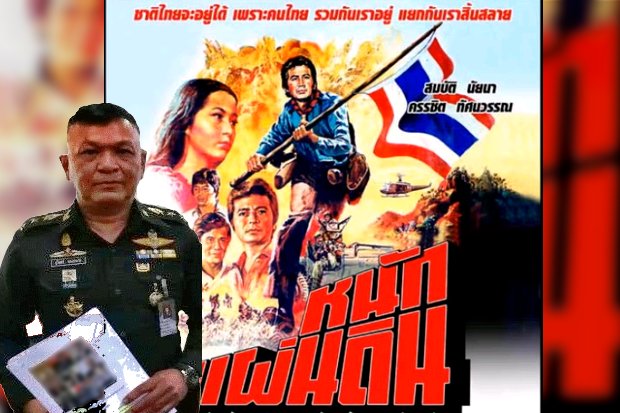 Army Col Burin Thongprapai (left on a Nak Phandin poster) is the strong arm of the Judge Advocate General's office within the National Council for Peace and Order, representing the junta in legal cases against opposition parties.

The song was recorded in April, 1976. The alpha male on the recording was Santi Lunphe, now a National Artist. The female lead singer was Sirichan Isarangkul Na Ayudhaya, backed by Ubon Kongsin. All were popular showbiz personalities in Bangkok.

Maj (later Col) Boonsong premiered the song on May 6, 1976, at a Bangkok memorial ceremony to mourn and praise 460 soldiers and policemen killed by insurgents during 1975.

There was nothing spontaneous about the blasting of Nak Phandin. It was the anthem of everything that led to the climactic Oct 6 massacre by right-wingers at Thammasat University, as surely as that massacre then ended three years of democracy at a murderous stroke. The killings, hangings and mutilations were scripted and ruthless. Nak Phandin was the beat of the marching song.

A year after the Thammasat slaughter, the movie Deadwood premiered. Superstars Sombat Methanee and Naiyana Shewanan lionised the patriots who drove out the leftists. Naturally, the film had no massacre scene but the Nak Phandin melody lingered on.

So again, the moving heel of the jackboot stomped; and, having stomped, moved on. In the words of Georg Wilhelm Friedrich Hegel, the 19th century German historicist-philosopher, "We learn from history that we do not learn from history."