It is deja vu all over again in Thai politics. Another political party aligned to Thaksin Shinawatra, an ousted, self-exiled and convicted former prime minister, found its way to the Constitutional Court where it was dissolved in short order for "opposing the democratic system with the King as head of state".

At issue after the disbandment of Thai Raksa Chart (TRC) Party is whether Thai politics is about to enter another cycle of election, unrest, coup, and constitution and how the dissolution is likely to alter vote results.

Thailand's structural polarisation tends to flare up with each major political drama and showdown.

In the case of the TRC's ill-fated attempt to play a trump card with its aborted nomination of Princess Ubolratana as candidate for prime minister, Thai socio-political divisions have remained largely unchanged.

Supporters of Thaksin and his aligned parties -- Pheu Thai, Pheu Chart, Pheu Tham, and Prachachart, apart from TRC -- will likely feel a familiar sense of resentment and injustice.

Their two earlier political banners -- the Thai Rak Thai and Palang Prachachon parties -- were dissolved in May 2007 and December 2008 for vote fraud, each time a culmination of yellow-clad street protests.

It so happens that five of the nine Constitutional Court judges who ruled on the TRC case are holdovers from the December 2008 ruling.

While the TRC case was deliberated within a month, accusations against the pro-junta Palang Pracharath Party for electoral infractions were not accepted by the Election Commission, whose members had just happened to have embarked on a "study tour" in Europe amidst the unfolding drama. 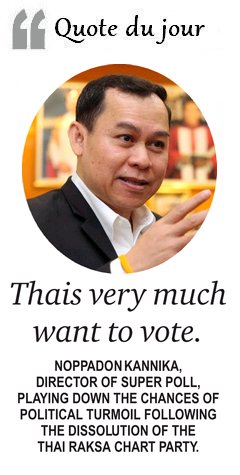 The anti-Thaksin side will see the Constitutional Court ruling as the TRC's comeuppance for involving a senior royal family member in politics. It is deserved because Thaksin was up to his old tricks again, just like his attempt to pass an amnesty bill in 2013 to pave his way home, while his sister Yingluck Shinawatra was prime minister.

According to Thaksin's adversaries and detractors, keeping him out and away and his parties from winning justifies all means available, as he embodies graft and the intoxication of the Thai masses through populist policies.

Yet there are a growing number of people who are tired of the recent years of division and political standstill.

Nominating the princess was utterly inappropriate and unfairly opportunistic, potentially compromising the institution of the monarchy.

Dissolving the TRC is thus understandable. But why not apply the same standard to other parties, including Palang Pracharath? Graft is widespread, not confined to the Thaksin side. Why not go after all unscrupulous politicians and generals? The problem is a crooked benchmark that is unevenly enforced.

All the same, the TRC dissolution is likely to heat up Thai politics ahead of the election and thereafter.

It is unlikely to lead to street demonstrations like the red-shirt protests in 2009-10, when the dismantlement of the Palang Prachachon Party in December 2008 disenfranchised millions of voters with nowhere to go electorally.

Now, a poll is just two weeks away and Pheu Thai has diversified and split into other parties. An outlet for grievances through the ballot box is available to preempt street demonstrations in the short term.

While voting patterns have remained largely intact in the recent past -- January 2001, February 2005, December 2007, and July 2011 polls -- the Thaksin camp now has several parties. Its disaffected supporters from the TRC's dissolution will likely support anti-junta parties in a tactical fashion.

Pheu Thai fielded 249 constituency candidates among the 350-strong MP seats up for grab nationwide, whereas TRC forwarded 174. The two parties overlap in 67 constituencies which Pheu Thai is now more likely to nab in the absence of TRC.

The other constituencies which TRC were vying for without Pheu Thai are likely to go to other Thaksin-aligned parties, especially Pheu Chart and to other anti-military parties.

In Bangkok where 30 seats are up for grabs, Pheu Thai is gunning for 22 constituencies, with eight for the TRC. The TRC constituencies are likely to go more towards anti-junta parties, particularly Future Forward and, to a lesser extent, the Seriruamthai Party.

Accordingly, the TRC's dissolution has not fundamentally changed voter dynamics. While Pheu Thai will likely pick up more seats after TRC's disbandment, the main beneficiaries are likely to be other anti-military parties. The votes that would have gone to TRC are unlikely to end up with the pro-junta, pro-Prayut parties. The party-list tally based on all votes cast will likely follow this trend but the anti-coup parties not aligned to Thaksin may win more than anticipated.

The broader dynamics centre on Thailand's political direction after the poll.

Controversies and confusion are to be expected because the constitution and its organic laws can be technical and petty. As the Election Commission, anti-corruption agency and Constitutional Court -- with its TRC ruling -- are viewed by many as politicised, the post-election circumstances will likely witness more manipulation and power plays.

This should all be familiar to those who have followed Thai politics. Yet there is a chance this time with new political players on the scene and a new reign that the tired old outcome of one side playing with a stacked deck may not be able to repeat itself.