A spat between the two resulted in Gen Apirat filing defamation charges against the police chief-turned-politician, whom he accused of "insults, maltreatment and verbal abuse against a soldier". The army chief fumed after Pol Gen Sereepisuth's comments on his royal decorations. He also used the contentious Computer Crime Act against him.

The lawsuit involves an incident on Monday in which Pol Gen Sereepisuth confronted an officer named Lt Col Pakit Phonfak, attached to a unit based in Prachin Buri, who followed him as he campaigned in the province.

In a clip that has gone viral, Pol Gen Sereepisuth, a former police chief, was captured using strong language to tell the solider to disappear.

In the clip, the leader tells the military officer, "Go away. Don't meddle in civilian activities."

"I am a civilian and you [A soldier] live on a payroll funded by taxpayers' money. I have not done anything wrong nor done anyone any harm. Go tell your boss not to interfere in civilian affairs. Soldiers must protect the country, not follow other people around," Pol Gen Sereepisuth was seen telling the officer.

He also said he was not comfortable with men in uniform.

Encouraged by the army chief, Lt Col Pakit filed a complaint with Prachin Buri police while the army praised him for remaining patient and calm despite the politician's strong words.

Pol Gen Sereepisuth is not the first politician to be stalked by men in uniform. 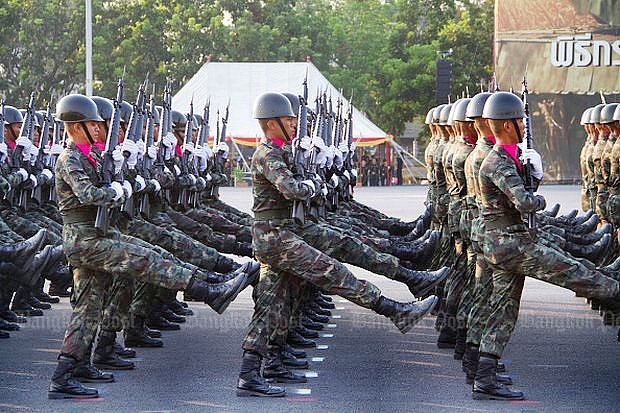 Late in January, Khunying Sudarat Keyuraphan, a key figure in the Pheu Thai party, was followed by a military officer, said to be attached to the Internal Security Operation Command (ISOC), as she was campaigning in Nonthaburi's Pak Kret district.

This was the second time she had complained about being followed. The first occasion took place a few weeks in the northern province of Chiang Rai. The officers were seen taking pictures and video-recording her campaigng messages.

Like the Seri Ruam Thai Party leader, Khunying Sudarat confronted the officers, albeit with more patience, urging them to stop stalking her.

It's no coincidence that the stalking occurred to politicians in the anti-military camp.

Khunying Sudarat, in particular, agitated the army chief profoundly with a election promise to cut back the military budget and scrap compulsory conscription.

In response to the latest dramas, Gen Apirat cited the army's honour which he said needed protection from his brothers in arms. He led soldiers in an oath of allegiance to protect the monarchy and support the government, and stressed the need to uphold honour in an internal memo that was leaked to the media.

"If someone, whether he is a soldier or not, does something that undermines [our] dignity, we must move to protect our honour and dignity," the message read.

"If someone makes inappropriate remarks about our supervisors or troops, it is an attack on the dignity of soldiers," he said. The army chief said the military must strive to remain intact since the country is "at a turning point, with the elections and political changes ahead."

But Gen Apirat should think again. His harsh statement does not make sense and does not help the fractious political atmosphere. By insisting on the military maintaining a dominant role in the life of the nation, he is showing that the country is still not normal.

It also speaks volumes about the failure of the military regime to bring about peace and order, which was its ultimate goal in toppling a civilian government in 2014. There is no question either that reconciliation and unity are just as remote.

Both Pol Gen Sereepisuth and Khunying Sudarat are right ins saying there is no place for the military now the country is inching towards democratisation.

Such stalking is nothing less than harassment, if not a threat to politicians at work.

This questionable mission uses a state mechanism, manpower and budget, and is not appropriate as it cannot guarantee free and fair elections.

Worse, now that Gen Prayut Chan-o-cha has accepted the prime ministerial candidacy for the Palang Pracharath Party, Gen Apirat's stance could be seen as partial and putting the election at risk.

On top of that, Gen Apirat as army chief, should know he has no right to drag the army into political conflicts.