Overcrowding at the top leading to unseemly scenes and unecessary risk 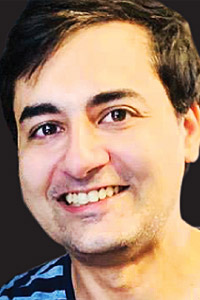 snail trail: In this photo taken on May 22, long queue of mountain climbers line a path on Mount Everest.

In 1852, Bengali surveyor and mathematician Radhanath Sikhdar, who was employed by the British under the ambitious Trigonometrical Survey of Indian subcontinent project, proclaimed "Peak XV" as the highest point on Earth at 8,840 metres.

Sikhdar was off by a mere 8 metres according to today's calculation which lists Mount Everest (as the peak was later renamed) at 8,848 metres. However, its new status as the "King of Mountains" had already inspired a new generation of adventurers.

It would take a century for the first humans, Sir Edmund Hillary and Tenzing Norgay, to scale the summit and return safely. Since then, over 4,800 people have mirrored their achievement; however, an alarming 300 souls -- 11 in the last two weeks alone -- have perished in this quest.

On Monday, 62-year-old American attorney John Kulish became the latest casualty after he died under mysterious circumstances while descending from the summit. Kulish fell prey to Everest's notorious "death zone", a term mountaineers use to refer to an area higher than 8,000 metres where humans require oxygen tanks to survive.

While this year's climbing season has not been the deadliest, an honour that goes to 2015 when an avalanche caused 19 deaths on Everest, it has raised questions about the emergence of a new danger -- overcrowding.

On May 22, a striking photograph shared by veteran Nepalese climber Nirmal Purja during his descent from the summit went viral showcasing conditions which can only be described as a human "traffic jam" near the top. Some first-hand accounts suggest many climbers had little awareness of how to behave by pushing, shoving, and even stepping over dead bodies to get ahead or take photographs.

Queues in the death zone pose a serious risk because climbers rely on limited oxygen supplies, which they carry in tanks to the top. Every extra minute spent in the death zone means less time climbers have to descend back safely to camp 4, an outpost at 8,000 metres.

In the face of overcrowding, some climbers resort to stealing oxygen tanks from others or in some cases ration their own supply creating an oxygen-starved environment in a space where there is little room for error. This impairs their decision-making ability and leads to deadly mistakes such as not knowing when to turn back or misjudging the gap between each step. Even if some climbers can maintain a constant oxygen supply, long queues lead to "summit fever", a determination to reach the top no matter the cost. Considering that many climbers spend an average of US$45,000 (1.4 million baht) for this "trip of a lifetime", turning back when so near is not an option.

Overcrowding is not a new phenomenon on Everest. It's been reported in previous climbing seasons, however, it was extremely severe this time around. So what went wrong this year?

Among the poorest countries in the world, tourism, especially mountain-related tourism is a consistent cash-cow for Nepal, a nation still feeling the pinch from the devastating 2015 Gorkha earthquake.

To scale Everest, every climber must first obtain a permit -- which costs $11,000 -- from the government. This year alone, Nepal earned $US4.1 million by issuing a record 381 permits and was on course to net another $300 million from associated costs climbers bear.

It's just not the government which benefits from these permits. Most modern-day climbers hire sherpas, an ethnic group that live in Nepal's remotest regions and are famous for their strength and endurance at high altitudes, to help them reach the top. By effectively commercialising the climb, Nepal's government is able to provide stable gainful employment to its citizens.

The government's requirement to acquire a climber permit is anything but stringent. A doctor's note that states that a climber is physically fit will usually do.

The lack of regulation has invited thousands of hobbyist climbers to attempt to reach the top despite not being physically fit or mentally ready for the arduous journey. Besides the ease of acquiring permits, the trek has become financially possible as many trekking agencies, which provide logistical support to the top, offer assistance at cut-throat prices.

This was the message Nepal's communication minister Gokul Prasad Baskota reflected on at an event on Wednesday to commemorate Sir Edmund Hillary's achievement as the first man to reach the summit by blaming the increase in deaths not on the "mismanagement of climbing permits, but rather inadequate training of some climbers".

For most of the year, extreme weather conditions make scaling Everest too risky. 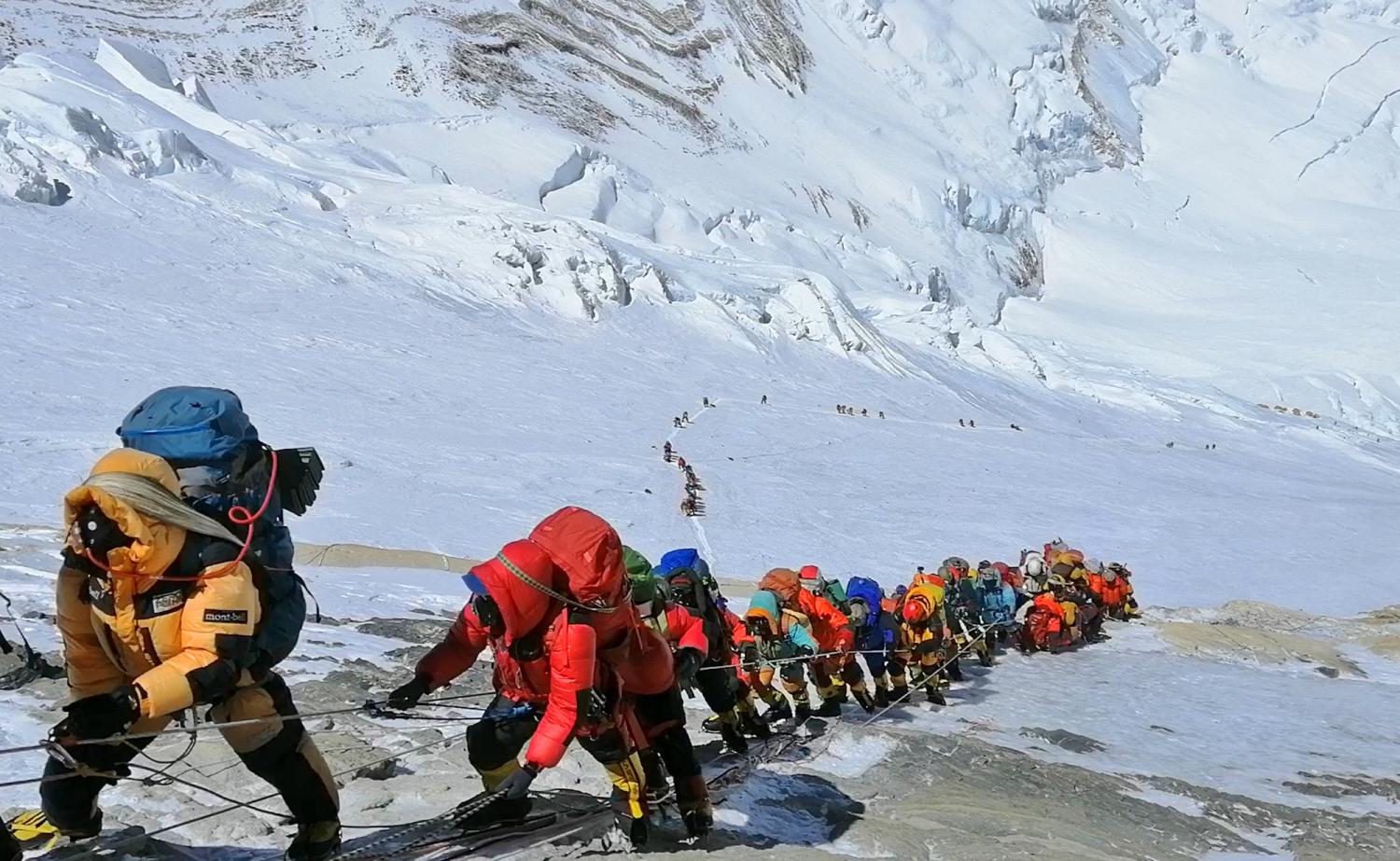 The great race: A long queue of climbers line a path on Mount Everest just below camp four, in Nepal. Over-crowding is putting lives at risk.

During winters, extreme temperatures and hurricane-force winds mean climbers face the possibility of being blown off the summit while the summer monsoon period threatens climbers with exposure to extreme precipitation. This leaves only a narrow "window" of opportunity -- usually the end of May -- when climbers can attempt the ascent under prolonged stable weather conditions. This year, that window was shorter, leading more people to attempt to reach the summit at the same time.

Climbing Everest was once only possible for mountaineers with years of training, experience, and determination under their belt. Before reaching the Everest peak, Sir Edmund Hillary had climbed the European Alps, New Zealand Alps, and other mountain ranges on the Himalayas.

Despite being nowhere as qualified, today's climbers are choosing to ignore the risks and tempt fate just so they can succeed at the 'ultimate adventure' for online validation.

Many adventurers are influenced by the images of beautiful landscapes, sunrises, and death-defying situations shared by their colleagues on social media platforms.

Far from being harmless fun, these lead to life-altering decisions just because everyone wants to prove their self-worth online.

So much so, that there have been reports of climbers spending more time than required at the summit -- which is only two ping-pong tables wide -- just to get the perfect selfie.

What can Nepal do?

Undoubtedly, Nepal has a tough task ahead to curb the number of deaths in its backyard. The country has come under international pressure to reduce the number of permits it issues.

China, which governs the Northern route to Everest, has already limited the number of permits it issues this year in order to clean-up the environment.

A similar approach, if adopted by Nepal, will likely not have the same impact unless it regulates who it issues permits to. A cap which still gives inexperienced climbers the opportunity to reach the top will not stop the rising death toll.

Instead, a stringent method for testing climber readiness through background checks must be developed before issuing permits. Moreover, trekking agencies which often cut corners on safety to reduce costs so that they can take on more clients should also be put under a fine lens along with the training level of the guides they employ.

Given that such rules will be hard to enforce, a quick fix to the solution is to standardise the guide-to-climber ratio. In some cases, it's been reported there have been as little as one guide for seven climbers.

While no easy task, Nepal cannot allow Mount Everest to turn into an amusement park for the sake of human safety and its image as a safe destination for adventurers.

A balance must be found, otherwise, Mount Everest may become known as the world's highest graveyard in the years to come.