Readjustment must take place to clarify reforms and plan of action

The unanimous adoption of the Asean Outlook on Indo-Pacific (AOIP) at the 34th Asean Summit in Bangkok last month demonstrated a common Asean position -- beyond Southeast Asia and it explicitly included the wider Indo-Pacific region. The Outlook should be seen as an important codification, a vital next step in order to develop and to expand the application of "the Asean Way" outside of its traditional domain.

While the AOIP depicts renewed solidarity among Asean leaders amidst rapid geopolitical shifts that have emerged in recent years, the Outlook falls short as a meaningful initiative that could re-shape the existing regional politico-security architecture to ensure deeper institutionalisation of Asean Centrality among member states. Beyond collective leadership, Asean lacks a clear, strategic direction to help shape member states' respective economic and security beyond Southeast Asia. Only through enhanced strategic clarity grounded by a deeper intellectual framework, will Asean be able to venture safely into the uncharted domain of the wider Indo-Pacific. In light of these realities, Asean needs to re-think the AOIP. 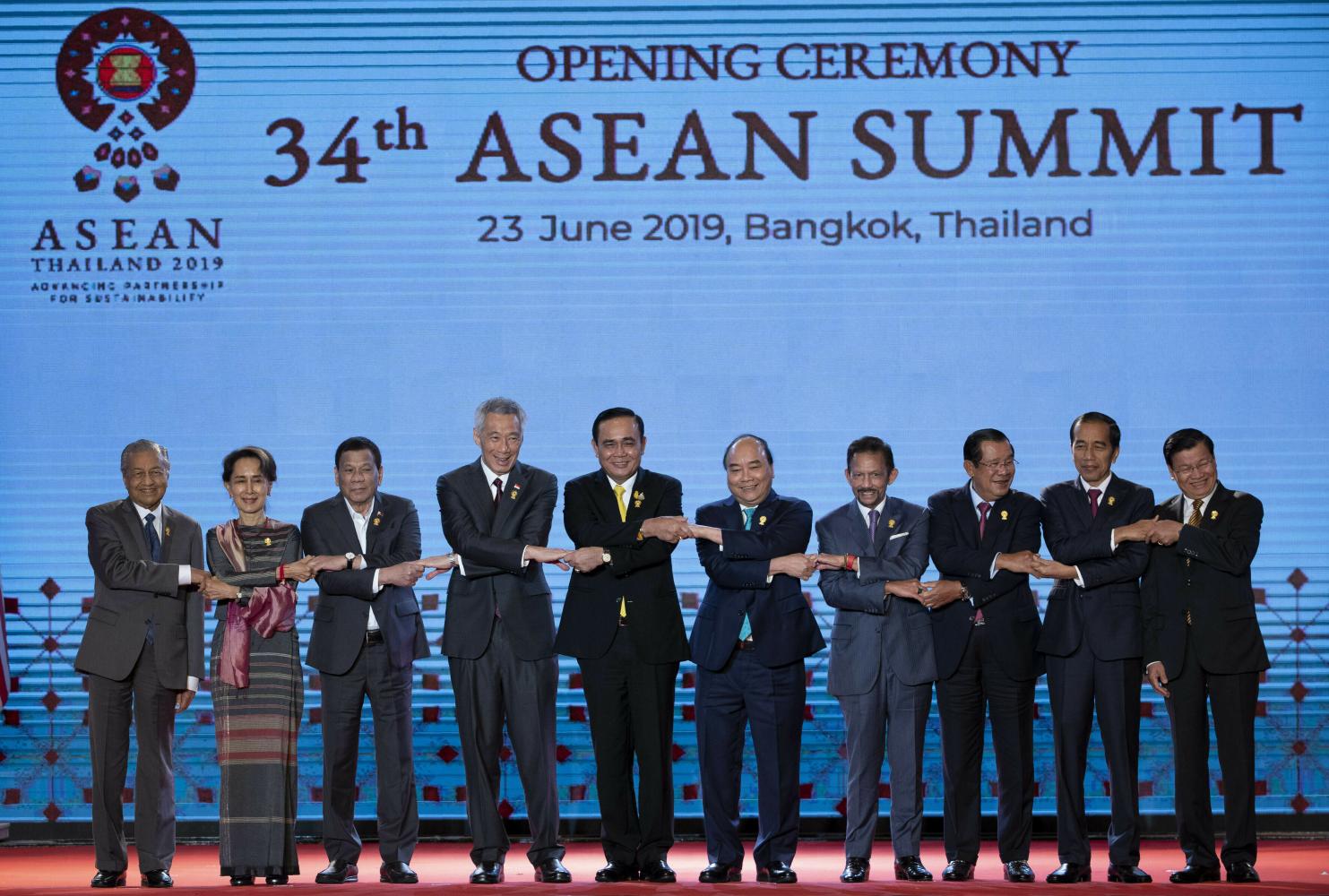 Southeast Asian leaders pose for a group photo during the opening ceremony of the Asean leaders summit in Bangkok on June 23. AP

Essentially, Outlook offers five key points that could be viewed as positive and forward-looking as regards to the extra-regional application of Asean Centrality. These include: (i) emphasis on the connections between the Asia Pacific and the Indian Ocean; (ii) focus on cooperation and dialogue rather than rivalry; (iii) advancement of development and prosperity for all; (iv) recognition of the importance of the maritime domain in the regional architecture; and (v) aspiration to generate momentum for future initiatives based on appropriate Asean documents that could facilitate Indo-Pacific collaboration.

However, reviewing the Outlook more closely, there remain serious shortfalls which have to be addressed in concrete terms if Asean wants control of the "Geopolitical Genie" that is now out of the bottle. Addressing these issues is essential if Asean is to avoid falling down a slippery slope that could harm its goal of becoming an "honest broker in the Indo-Pacific."

With regard to the interest of Asean to lead the shaping of the economic and security architecture beyond Southeast Asia, as stipulated in paragraph two of Outlook -- this statement appears to be grossly overoptimistic given the structural constraints Asean already has to resolve in its own region. Most notably, the South China Sea crisis has to be dealt with resolutely. At present, Asean is acting in a bolder fashion to address wider and tougher economic and security issues in new territories that Asean may not be familiar with and certainly does not have control of. If Asean wishes to take the lead here, the paragraph should be revised to clearly state precisely how it intends to approach or to resolve the threats and challenges deriving from great power competition in the Indo-Pacific.

However, it is not only collective leadership that Asean must develop, as stated in paragraph three but also intellectual leadership that would allow Asean to do more than simply convening dialogues and promoting cooperation.

Paragraph four also mentioned that the Outlook is not aimed at creating a new mechanism or replacing the existing one and that it is intended to be inclusive in term of ideas and proposals. Frankly, Asean does not lack ideas or proposals; what the grouping lacks is genuine results demonstrating that these ideas and the proposal meet the aspirations of its own domestic constituencies and satisfy the expectation of external partners.

The discussion as to "promoting cooperation" using Asean Centrality with all other regional and sub-regional mechanisms, as cited in paragraph five, is a good one, given the growing pressure deriving from Sino-American rivalry. However, Asean Centrality, in the context of the EAS, for instance, must work towards greater acceptance and command greater respect by all the major powers. Recognising this reality, Marty Natalegawa, former Indonesian foreign minister, mentioned recently during the 33rd Asia Pacific Roundtable in Kuala Lumpur that Asean Centrality must be earned.

Paragraph six stated "the importance of the maritime domain and perspective in the evolving regional architecture". This is particularly interesting. Here it appears that Asean is trying to get ahead of the rising Sino-American naval competition in the South China Sea. The big questions here are: What does this mean in actual practice? What about the shape and content of the South China Sea Code of Conduct? And the point concerning Asean as playing a central role -- is it as a facilitator of cooperation among the belligerent powers or a credible manager able to keep the maritime domain safe, sound, and free from escalating tensions and conflict?

On the further strengthening of various Asean-led mechanisms, as set out in paragraph eight, again while recognising the necessity thereof, there is an absence of any explicit identification of existing weakness that needs improvement. Additionally, the identification of concrete measures to improve the efficacy of those various Asean-led mechanisms is missing. There is nothing concrete mentioned in this regard in the Outlook document.

The discussion of the re-commitment to the principles outlined in the Treaty of Amity and Cooperation in Southeast Asia (TAC) in paragraph 11 fails to offer solid suggestions to make the treaty more effective to ensure full compliance by all signatory states to the treaty, be it, CBM, PD or crisis management.

Paragraph 12 mentioned that the Outlook will, at the same time, help to generate momentum for building strategic trust and win-win cooperation in the region. Precisely how will this be done in light of the deepening maritime vs mainland Southeast Asia divisions and the inherent institutional flaws in the Asean structure remains unclear.

Coming from Jakarta, maritime cooperation as stated in paragraphs fourteen and fifteen seem to be the core issue. While the document itself is positive in noting the relevant issues, the statement is a mere laundry list that stresses cooperation that is less relevant to the Indo-Pacific region. It is here where distinct threats and challenges are real and require compliance and enforcement to prevent tension from escalating into conflicts. Hence, the question remains: how will this be achieved within the existing institutional architecture?

On connectivity as set out in paragraphs 16 and 17, the Outlook appears to make an interesting statement on various mechanisms for cooperation. But what is not mentioned are the Lancang-Mekong Cooperation (LMC) and Belt and Road Initiative (BRI). Is this an oversight or deliberate? After all, this section is a discussion of infrastructure that is supposed to be overarching -- yet the omission of LMC and BRI downplay Asean's deep and real reliance on these two initiatives to meet connectivity targets.

Paragraph 21 to 23 refer to mechanisms that provide important but vague attributions as to the role of the Outlook as a "guide to Asean's engagement" and "recognised as potential cooperation". These paragraphs neglect to mention how, explicitly, Asean intends to manage the different modalities among its external partners. The Outlook seems to lack any serious, prior consideration as to how to enhance cooperation as well as a lack of clarity as to mechanisms to manage the issues that matter most to the Indo-Pacific region.

To sum up, the entire document appears to be a smart way to project the Asean vision in the wider context of the Indo-Pacific, capitalising on the Asean Way and allowing the regional grouping to withstand the pressures created by the geopolitical and geostrategic shift deriving from the relentless Sino-American completion. However, if Asean plans to gain "buy-in" from their major external partners at the next EAS Summit, fundamental readjustment of the existing Outlook text must take place to provide clearer, smarter, and deeper indications as to how Asean intends to reform and to strengthen its process of community building and to give new momentum to existing Asean-led mechanisms, be it the TAC, Asean Plus One, EAS or ADMM Plus One. Without such an approach, Asean Centrality could slide down that slippery slope into irrelevance.

Pou Sothirak is the Executive Director of the Cambodian Institute for Cooperation and Peace.