HK protests: Behind the barricade
World

HK protests: Behind the barricade

An anti-government protester is seen during clashes with police near the Polytechnic University in Hong Kong, China on Saturday. REUTERS

On the night of Nov 13th in Hong Kong, I heard there was a protest in the city centre of the area of the New Territories I was staying in, Sha Tin. After crossing the bridge over the Shing Mun River, I notice four protesters talking beneath a pedestrian underpass. Walking through the megamalls that constitute the city centre, I see workers clearing up broken glass but see no protesters. But on my way back across the bridge to my hotel, I encounter a crowd of about 50 people yelling and screaming abuse, and working my way through them, see a line of riot police advancing from the other direction. After several minutes of shining torches and bellowing warnings through a megaphone, the police raise the black flag warning that tear gas will be fired. The crowd retreats as one or two canisters are fired.

Minutes later, the bridge is clear, protesters and police have disappeared and couples are strolling along the riverbank. What has struck me is that most of those in the crowd confronting the police were not dressed in black and wearing masks. Some were middle-aged and were wheeling bicycles, and had apparently been on their way home when they saw the protest and decided to join it.

How much popular support is there?

The fact that some "ordinary Hong Kongers" spontaneously join a protest they encounter does not prove that there is overwhelming popular support for the movement. From numerous conversations and the opinion polls that I have seen, I would estimate that between 60 and 70% of the population are in agreement with the protesters' core demands, but considerably fewer with some of the hard-core elements' tactics, which have increasingly involved vandalising MTR stations, blocking highways and attacking businesses linked to mainland China. But clearly, the narrative in China's state media outlets -- such as Xinhua and the English-language China Daily and Global Times -- that the protesters are a small number of violent mobsters opposed by the general population is a complete fiction.

In some ways the protests are beginning to resemble a civil war -- but despite a handful of well-publicised violent incidents, the emphasis is on "civil". Targets for vandalism are carefully selected, and this week the word "Sorry" was spray-painted next to a business that had apparently been attacked by mistake. Protesters repeatedly apologise to those caught in roadblocks for the inconvenience. And there have been virtually no reports of looting, although opportunities have been plentiful.

Numerous articles have been published about families split by opinions on the protests. Indeed, in numerous conversations over the past two months, I have yet to hear about a family that is not divided. It's not simply a case of rebellious youngsters and conservative parents; I have been told of parents arguing with one another, and siblings squabbling amongst themselves.

The emotional toll cannot be overstated. Aside from families being ripped apart, tears spring to the eyes of many ordinary Hong Kongers, on both sides of the divide, when talking of what has happened to the place they live in and love.

Despite the split opinions in all the age groups, it is clear the most vociferous protesters are young -- in their late teens and early twenties -- as human biology seems to dictate. Increasingly, universities have become the headquarters of the protest movement. It seems like a universal truth that young people are more rebellious and aggressive than their elders. But is that the case in China? In two years of living in Shanghai, I saw little evidence of "rebellious youth". Has the Chinese Communist Party, the most advanced social engineering body the world has ever seen, succeeded in changing human behaviour? And do they think they can change it here?

Hatred of the police

While Chinese media have sought to explain the protests as an economic phenomenon, claiming that much of the protesters' ire is driven by high real estate prices, in dozens of conversations I have yet to hear a single protester even mention the subject. The right to choose their own leaders is much more important, but the single most galvanising motivation seems to be a desire to bring the police to heel for their perceived violence; two of their five demands concern the police. The widespread loathing of the police is in some ways quite surprising. In Thailand, a commonly-held view holds that the police are deeply corrupt and more motivated by a desire to line their own pockets than protect the population. I have yet to hear anyone accuse the Hong Kong police, once notoriously corrupt, of anything similar. The perception is rather that they have become agents of Beijing, not protectors of Hong Kong. 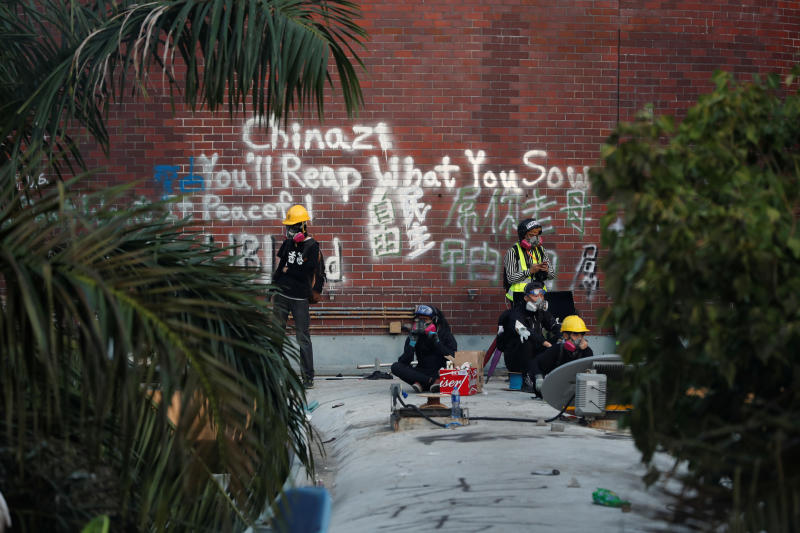 Protesters and a member of the press rest next to a graffiti at the Hong Kong Polytechnic University (PolyU) in Hong Kong, China on Monday. (Reuters photo)

Police have often fired tear gas at protesters. But there are many accounts of officers firing tear gas at near-empty streets, with no protesters in sight -- almost as if they had a canister quota to fill. On Nov 2, I saw a long line of riot police in full battle gear, weapons drawn, stretched along the middle of Hennessy Road in Wan Chai facing one side of the street -- which was completely empty except for three or four journalists in yellow vests. It's possible they were acting on a tip that a protest was imminent, but the surreal scene looked more like a token show of force.

While the Chinese state media pretend the protests comprise a small number of violent mobsters instigated by the West, and Western media has largely focused on the protesters' demands for democracy, there are other narratives that have seen little or no media attention. Some say the protesters received their initial support from local tycoons who in the past illegally moved their capital from the Chinese mainland into Hong Kong, and feared the extradition bill could see them sent back to face justice. This narrative is not good public relations for the protesters, and apparently not for Beijing, who prefer to claim the protesters' support comes entirely from anti-China forces overseas.

Other drivers of the political divide are bread-and-butter issues. Some -- but by far, not all -- business owners whose livelihoods have been affected by the protests oppose them. Economic self-interest has also caused a geographical split. Largely unreported is the fact that under a Hong Kong law supported by Beijing, owners of land in the New Territories were given the right to build "village houses" on land to which they were given titles, and have profited handsomely by renting them out. Urban dwellers on Kowloon and Hong Kong Island have no land to build on and want to overturn the law, arguing that such a precious resource should be used for the benefit of all Hong Kongers. 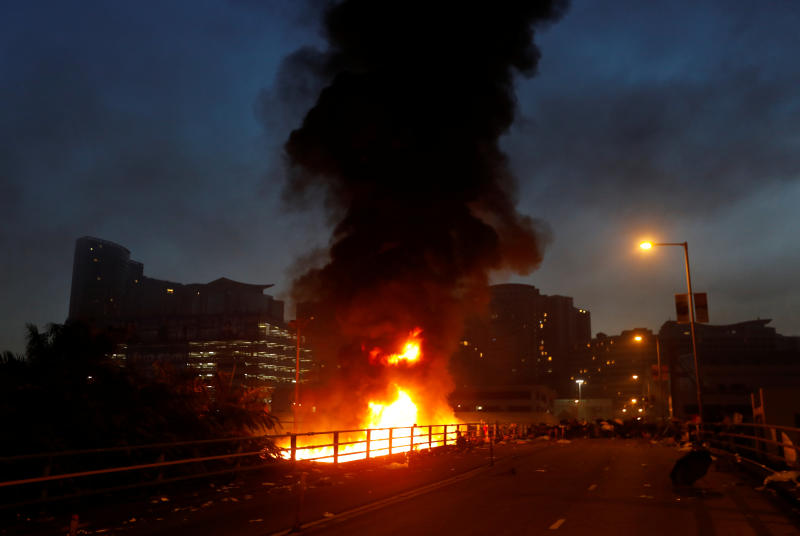 A fire is seen at Hong Kong Polytechnic University (PolyU) during an anti-government protest in Hong Kong, China on Monday. (Reuters photo)

Aside from demands for democracy and police accountability, I have little doubt that long-standing opposition towards control by Beijing is a primary driver of the protests. Hong Kong has its own language and culture, as well as political and economic system, that are quite distinct from mainland China. Most of Hong Kong did not exist before the British seized power over the area, and there is little emotional connection to the Chinese "motherland". This sense of a separate identity runs along distinct emotional strands. One is resentment towards "rude" mainlanders flocking to Hong Kong's landmarks and beaches and driving up prices. Another, perhaps less conscious, is a centuries-old antipathy -- by southern Chinese in general -- towards control by Beijing.

This is China's greatest fear. When leaders in Beijing talk about the importance of "one country, two systems", what they are concerned about most is the "one country" part. Westerners often perceive the Beijing-based Communist Party as being in absolute control of a unified nation, but their power is far more precarious. The Party's biggest longstanding fear is that China could repeat its past, various regions could rebel and civil war could erupt. Beijing's policies towards Hong Kong, Taiwan and Xinjiang are all driven by this fear. It lies behind the party's desperate desire to maintain popular support by continuously raising standards of living.

The first march against the extradition bill took place on March 31, but the protest movement did not gather steam until July. In mid-November, following a week of unprecedented violence and transportation disruption, nobody seems sure how it will end. Beijing has been reluctant to unleash the People's Liberation Army from their barracks -- probably because of the economic toll as much as a desire to avoid world condemnation -- but the Party feels it cannot be seen to give in to demands for democracy that could then spread to other regions in China, despite its throttling of traditional and social media.

One of the protesters' five demands -- withdrawal of the extradition bill -- has been met. Meeting another -- allowing universal suffrage -- would set a dangerous precedent.

It could more easily meet the three other outstanding demands -- an independent investigation into police brutality, release of those arrested and withdrawal of the term "rioters" to describe demonstrators -- but it has been unwilling to do so. Many of the protesters I've spoken to don't believe the conflict can be resolved.

They are deeply pessimistic about their chances of success -- and deeply committed to continuing their struggle.

Dave Kendall is a senior producer, reporter and sub-editor for the Bangkok Post.