In a vast area of wetlands in Ban Boonrueng village, located in Chiang Rai's Chiang Kong district, the return of buffaloes signifies the resilience of what was a disappearing swamp forest in the northern province.

In the last decade, buffaloes almost disappeared too from the community after a number of rice farmers gave up looking after the animals that requires so much food and sustenance from the wetland's ecosystem. The few who continued farming with the buffaloes used the animals to plough their rice fields, yet most switched to using plough trucks instead, said Uncle Kaew, a Ban Boonrueng villager.

To counter the extinction of buffaloes, the Ban Boonrueng community initiated a buffalo raising project a few years ago as part of a campaign to restore the wetland forest in their area. Community members voluntarily took turns tending the animals. The number of buffaloes eventually grew to 20.

In 2014, the Prayut Chan-o-cha government strongly promoted 10 border provinces as special economic development zones. The Boonrueng forest swamp became a designated development site and was targeted by investors who took advantage of the land being free to cut their production costs, as the land came without title deeds.

Along with being snapped up by greedy developers who joined the land grab -- as the state had no legal mechanisms to protect the area -- the degradation of the wetlands was due in part to little awareness about the significance of wetland ecology among state authorities and some locals.

The decline in buffalo numbers in the past decade directly coincided with the degradation of wetland forests, due to encroachment by villagers and a lack of protection policies by state agencies.

Additionally, the 2014 initiative reflected the lack of policies for wetland conservation, despite the country's status as party to the Ramsar Convention, an international treaty for the conservation and the sustainable use of wetlands. The plan angered many Ban Boonrueng villagers, who in their aspirations to protect the wetland ecology, challenged state authorities.

"We have used and kept this forest swamp for generations. The forest belongs to the people. The rules created by the community are like a fence that protect the forest area," said one villager.

During the rainy months of August and September, the Mekong River runoff spills into tributaries and floods the wetlands along the Ing River. The area then turns into a breeding ground for large and small fish. Indigenous flora and fauna thrive, making the area a "supermarket" for local villagers to enjoy.

Yet as developers and state authorities encroached on the land and reduced its natural value, those who saw it as a source of their livelihood felt more and more threatened. 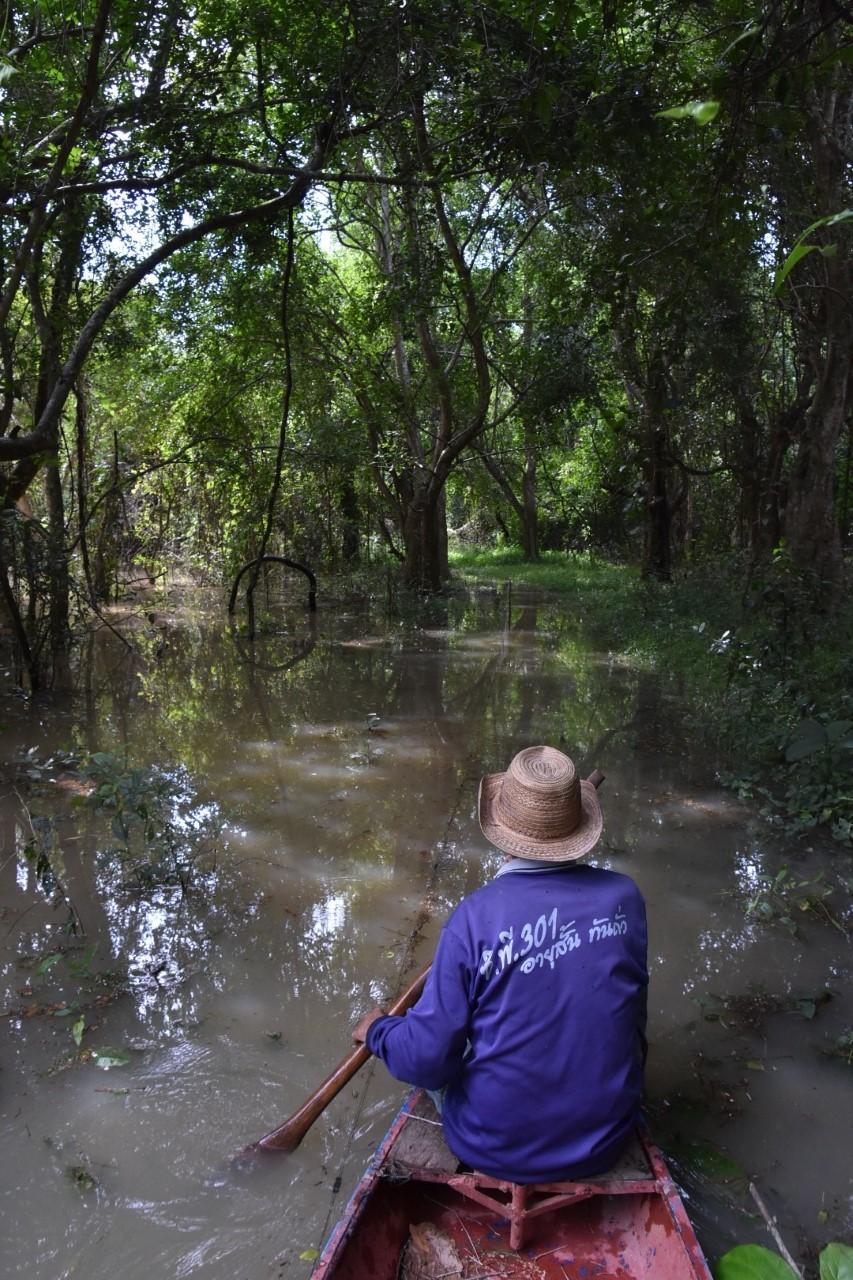 A villager paddles his boat into the Boonrueng wetland.

"Our parents and grandparents preserved the wetland forest. We will not lose it," said Uncle Kaew.

So villagers started a campaign called the Ing River Conservation Project, engaging in community research, data collection and fund-raising to save the river and its surrounding areas of wetlands. They project also expanded its network into groups of academics, environmentalists, and the people's sector. In 2015, the project held a big forum to exchange data with the state, headed by the Chiang Rai governor, academics and the media. The forum was observed by the National Human Rights Committee.

"We revived our buffalo farms, with villagers pitching in money to acquire the animals. Villagers take turns to tend the herds," said a villager. He added: "I am glad we have buffaloes like in the old days. It's calm and peaceful," he said.

The Boonrueng protection area has become a study site as academics and organisations visit to learn more about its conservation model. At the same time, the special economic zone which had an archaic development paradigm could not attract investors and eventually, Chiang Rai authorities decided to drop the scheme.

The Ban Boonrueng villagers joined the Ing River Basin Assembly, and rolled out a plan to have the wetland registered with international agencies. Their campaign paid off in the end when the United Nations Development Programme picked it, among other communities around to world for the Equator Prize 2020. The prize, announced on June 5, recognises community efforts to protect and restore the biological diversity while reducing poverty.

Yesterday was a big day for the Ban Boonrueng villagers as they held a ceremony to celebrate their success, a precious lesson for other communities wishing to join the sustainable development trail.