Easing pandemic pain among the poor 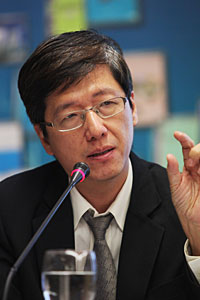 The second wave of the Covid-19 pandemic that started December last year has sparked a new round of public concerns about increasing health risks and severe social and economic repercussions.

This new outbreak, however, is different from when the first wave hit Thailand last year. This time around, the number of infected people is much higher and the virus has spread to many more provinces. Yet, the lockdown control measures are much less strict than before. There are fewer control measures and restricted areas for the second wave, and they will probably be relaxed sooner too.

Besides, the public has now become relatively accustomed to life in a pandemic, realising that the zero-infection goal as earlier set in the first phase of the pandemic is simply unrealistic and impossible. The spike in new infections has come from migrant workers and ongoing Thai-Myanmar cross-border travel bringing the virus. It is extremely difficult to strictly control and monitor the long natural borders, which is why there are continuing coronavirus infections among migrant workers.

Making things worse is their crowded living conditions which further intensify the virus spread among themselves and to local Thais. It is unlikely, therefore, that the second wave of the pandemic will end as quickly as the first phase.

The prolonged spread of the virus requires steady outbreak controls, although with the more relaxed measures, as reflected by the government's smaller relief schemes, the economic and social repercussions will be less severe than in the previous outbreak. The international economy is also picking up as seen from the better export figures since last December. Therefore, the macroeconomic fallout will likely be less damaging than in the first phase of the pandemic.

Despite the better economic outlook in general, some business sectors and certain groups of people are being hit much harder than others. Inbound tourism, for example, is still paralysed by the pandemic. Despite the government's schemes to invigorate domestic tourism, the reach is limited and the benefits unstable.

Tourism businesses remain weak and may easily collapse if hit by another wave of the pandemic. People in the tourism sector therefore remain extremely vulnerable.

Although other sectors may fare relatively better than tourism, a large number of small businesses have limited cash flow. Their hopes of opening up their businesses again when the first phase of the pandemic ended were dashed when the second wave struck late last year. If they have to give up and close down their businesses, the chain effects on their employees and related businesses will be grave.

According to the Bank of Thailand, the second wave of the pandemic will affect 4.7 million people in the workforce -- 1.1 million of them risk losing their jobs while the other 3.6 million face significant loss of income.

Aggregate savings increased after the first phase of the pandemic, probably as a result of the state's cash handouts. But savings are declining amid the new outbreak. This signals a declining capacity to withstand the pande- mic's impacts among many groups of people.

The prolonged and severe economic impacts from the coronavirus pandemic will entail a myriad of social problems, especially on vulnerable groups. A previous study from the Thailand Development Research Institute (TDRI) showed that vulnerable groups have suffered more than other groups since the start of the outbreak, as their family breadwinners were already working in the informal sector without job security or regular incomes. So they were among the first groups who lost their income when the pandemic hit.

Vulnerable groups have also suffered more adverse social impacts from the pandemic. For example, children in poor families perform much worse in online studies than their well-to-do peers. Poor parents are also less equipped to assist their children with online studies. The elderly in poor, vulnerable families also have less access to public healthcare services.

Here are our policy recommendations to assist vulnerable groups to survive the pandemic:

First, an urgent study on the growing social impacts on vulnerable groups during the second wave of the pandemic, their capacity to cope -- or not, the type of state interventions they need, the state relief measures that still bypass vulnerable groups, why they are missed out, or why they get help quite late, for example.

Second, the government must have special schemes to assist vulnerable and high-risk groups. In addition to cash handouts, there should be a variety of measures to answer different needs. For example, access to different state services such as employment, public health care, and special assistance for their children's online studies.

The government must ensure that vulnerable groups are not left out in state intervention schemes. In fact, they must have even better access during the pandemic.

Apart from using state mechanisms, the government should involve local governments, communities, and the private sector to prevent vulnerable groups from falling through the cracks. Also, there should be open and easy access for the general public to inform state authorities when they spot the weak and the poor who have not received state assistance.

Third, there should be a system to monitor the economic and social "scars" from the pandemic. These scars are represented by the businesses and people who have been affected by the prolonged Covid-19 crisis so much so that they are no longer able to recover even after the pandemic is over. For example, small business owners who go bankrupt and do not have the money to start up again or laid-off workers who have no chance of being employed again.

These people may well overlap with the previously mentioned vulnerable groups. When they are located, the government should promptly implement the measures to alleviate their difficulties and assist them so they can rejoin the economic system as well as receive social rehabilitation services.

Fourth, the government should consider giving Covid-19 vaccines to vulnerable people before other groups because they face a greater risk of unemployment and cannot survive very long without an income. Receiving quick vaccinations will help reduce the risk of joblessness.

Fifth, for long-term remedies, Thailand must reform the country's social protection system to pay special heed to the poor and vulnerable. The prolonged pandemic will leave long-lasting scars on the economy and society. A grave problem awaits.

To help vulnerable groups heal from the scars of the pandemic, a properly designed social protection system is necessary. I will discuss the welfare system reform in my next article.

Somchai Jitsuchon, PhD, is research director for Inclusive Development Policy at the Thailand Development Research Institute (TDRI). Policy analyses from the TDRI appear in the Bangkok Post on alternate Wednesdays.