How many pops have you made? Popcat website/game took Thai internet by storm over the weekend. And the furry frenzy was still going strong at the time of going to press. ICYMT, here's a summary of the online feline phenomenon so far. Yes, cat pun very intended.

Thailand may be late to the party in terms of discovering Popcat, which first started by three computer scientists of the University of Sheffield in December 2020 and went viral in April (source: soyacincau). But seemingly it took Thais overnight to rise to the top of the leaderboard. Taiwan and Malaysia have been avid tappers of the game while Thailand is staying on its toes to remain numero uno. At the time of going to press, we have amassed almost 64 billion pops and gained the gold medal and, by the time you're reading this, I wouldn't be too surprised if Thailand has passed 100 billion pops.

Okay, I'll say it's a silly win but since we don't have much to be happy about lately, we'll take it. Go Thailand, go!

Popcat simply allows you to tap away on an image of a cute cat whose mouth is comically wide open in the shape of "O" when you touch the screen. As you tap, the number of taps will also appear on the screen and it will be added to the total count of your country. The website uses two images that are originally from a short video that @XavierBFB posted on his Twitter feed in October last year. His cat's name is Oatmeal and he was actually chirping at a bug. The more you know.

In the quest to top Popcat, Thai tappers have shared tips on how to rack up scores quickly and tapped into their ingenuity in the process. You can simply use fingers on both hands and tap away on the left and right sides of your screen simultaneously. With this method, my best is 1,000 in 1.20 minutes. Or you can make your hand into a paw and tap up and down on the screen rapidly, perhaps like a real cat would. At the risk of being rated R, press one finger on the screen, place a bullet vibrator on the finger and then see how quickly the number goes up on the screen. If there was ever a need for a tagline for such vibrators it would be 'Perfect for all pussies', especially with Popcat. A few have even resorted to autoclicker tools. Anything for a gold medal, right?

The enthusiasm Thailand has for Popcat is so much that one of its creators gave us a shout-out. Edward Hails, who goes by @onfe1 on Twitter, retweeted a picture of a Thai protester holding a placard with "Popcat for the nation" on it with the following message: "Please take a moment to learn about the protests in Thailand. Many people are asking for change, the least we can do is listen. #whatshappeninginthailand #ม็อบ15สิงหา". The picture in question was tweeted by Khaosod English.

A meme that keeps on meme-ing

The Popcat phenomenon has also inspired many memes, which are either just for fun or for real-time marketing. Here are two examples. I can't give you all of my favourites or else we'll be here all day. 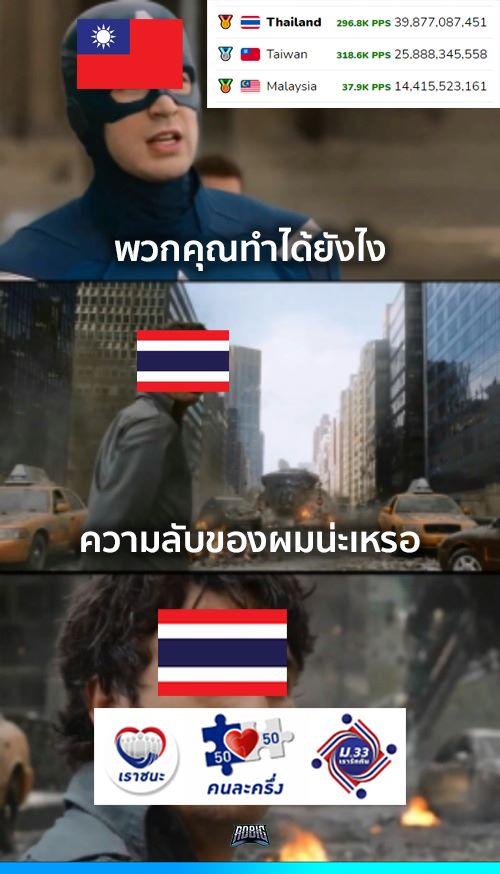 This one from ADBIG (fb.com/ADBIGGY) jokes that we overtook Taiwan and Malaysia in such a short time because we have a lot of practice signing up for several apps that the govt has introduced during the pandemic.

This Drake meme from @/luv_cattt on Twitter jokes that while we may not be the best at the real Olympics, we're the best in Catlympics. 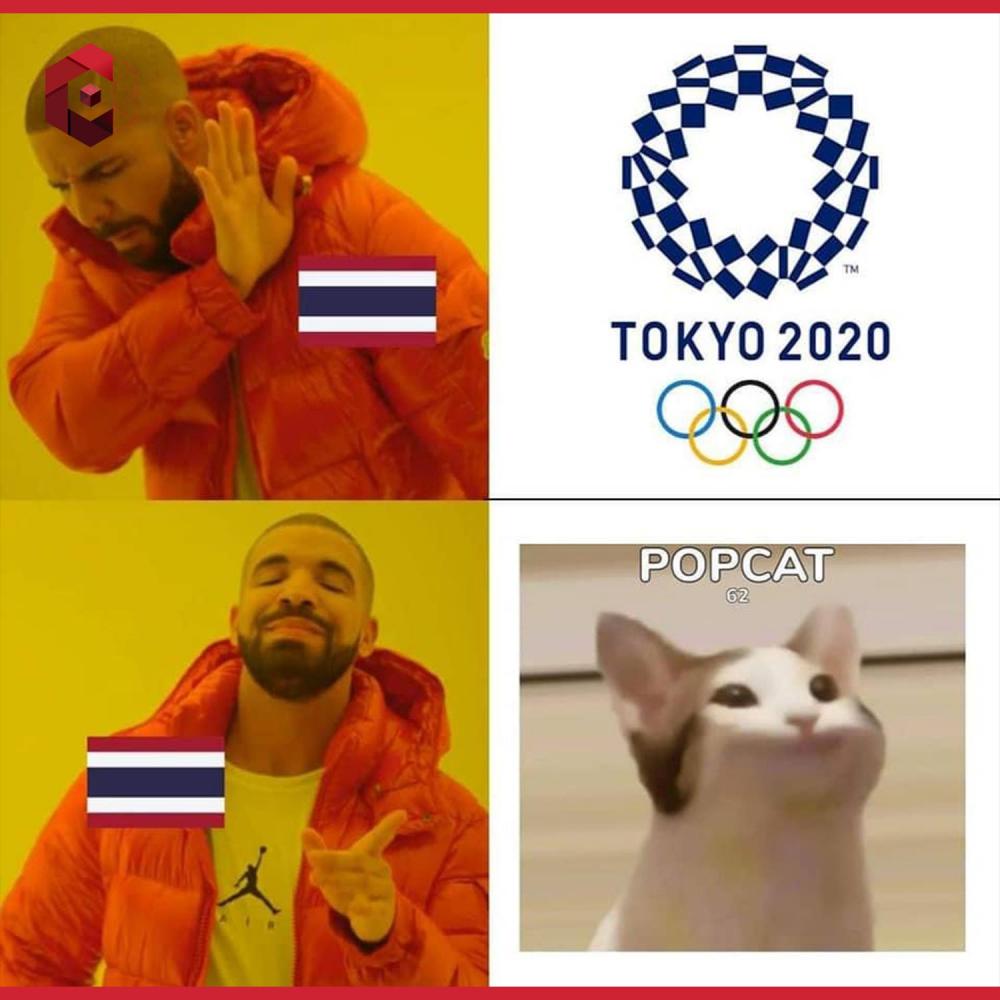 The game itself has inspired a Thai version titled Popyut (prayut.click). It shows four shots of our premier falling down while playing soccer with his colleagues at Government House, pre-Covid-19. They will rotate as you tap away. Obviously, the creator doesn't think highly of him. You can choose a guild based on the province you're in. At the time of going to press, the total taps stood at nearly 144 million, with Bangkok in the lead. 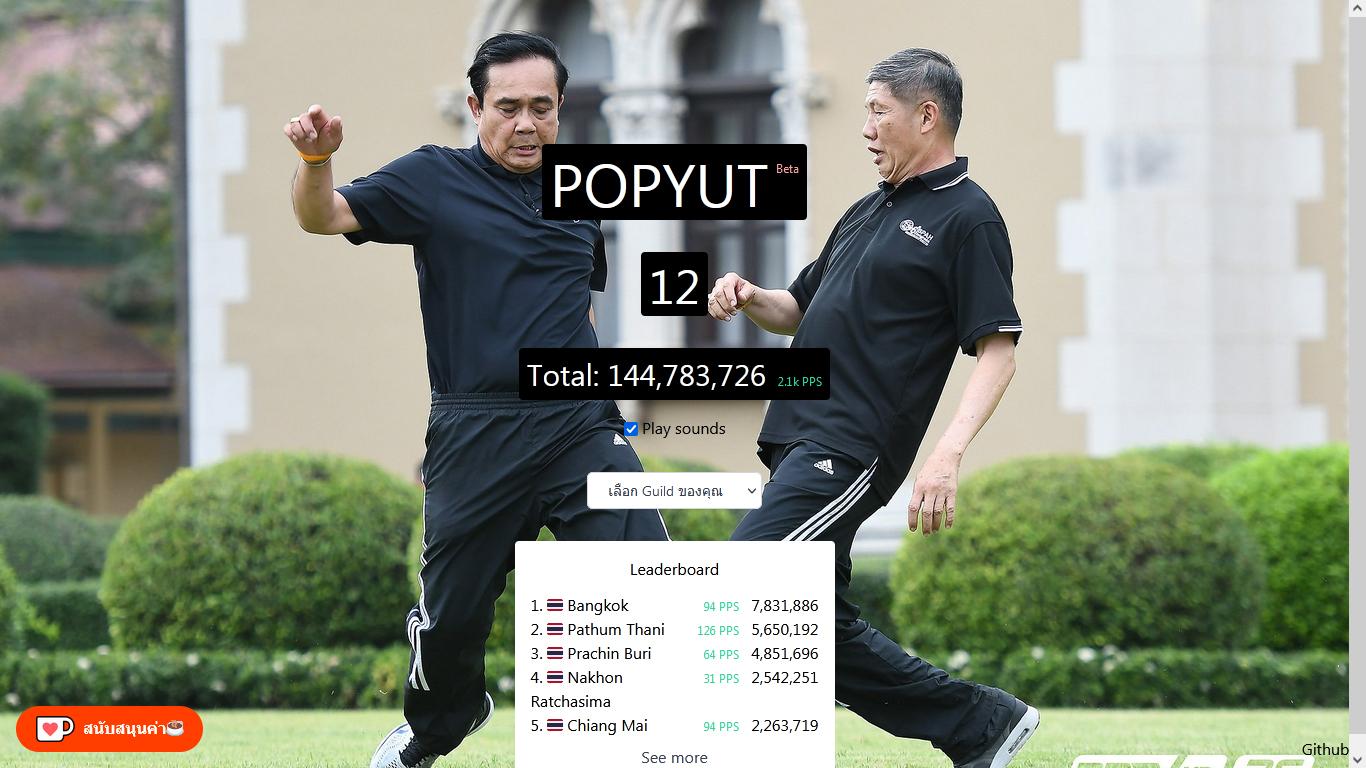