If you think Thais take taking photographs for their social media seriously, you haven't seen the extra lengths couples go through to make their pre-wedding photos a lasting (and viral) memory. To mark St Valentine's Day and warm your heart a little, here are a few of the craziest Thai pre-wedding photos, ranging from cute to creepy. 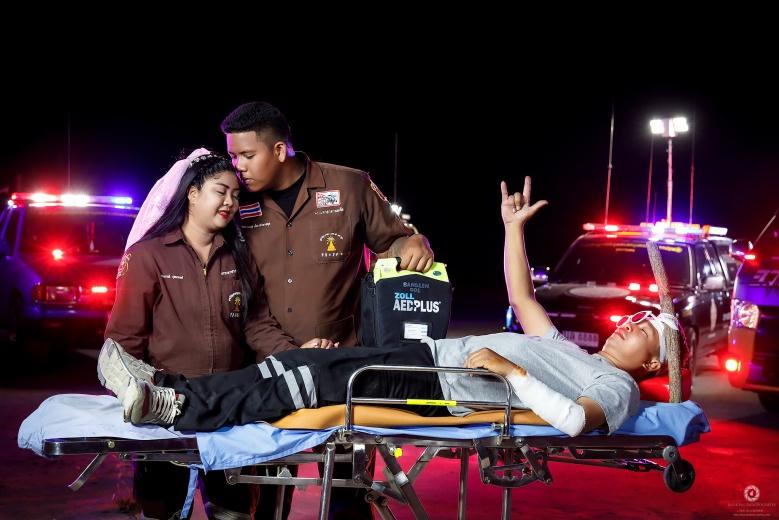 A soon-to-wed couple from Nakhon Pathom put on rescuer uniforms in their cute (and somewhat confusing) pre-wedding photos. Why? The couple were rescue volunteers for a long time and that was how they met. According to Kom Chad Luek, their friend posed as an injured person on a gurney holding his right hand up to make a love sign in the picture -- as, y'know, an injured person does. Also, the bride-to-be wore a pink veil while happily anticipating a kiss from her hubby-to-be. Aww. The marriage was on May 1 last year.

(Not Even) Death Do Us Part

Last month a set of pre-wedding photos by a daring couple went viral for a scary reason. In the photographs, they are seen posing at a Thai cemetery and a crematorium. Nonts Kongchaw posted these photos on his Facebook page with an apt theme of "Love Beyond Death". Nonts lays on a white cloth in a grave, in one of the photos. He even posed in a coffin inside a cremator. In another photo, his bride washes his face with coconut water while he is lying on the ground (coconut water is used to wash a corpse's face in Thai culture). 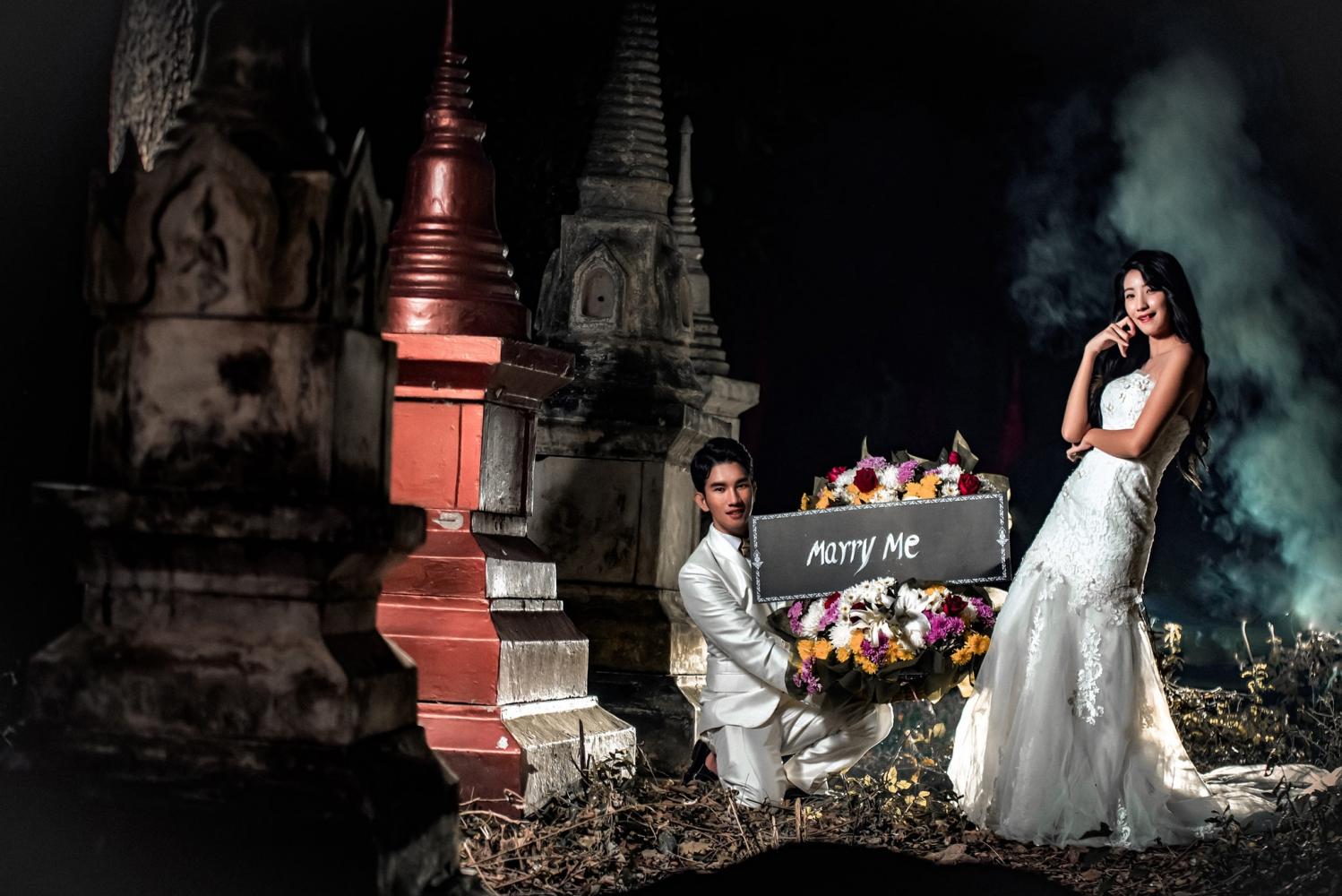 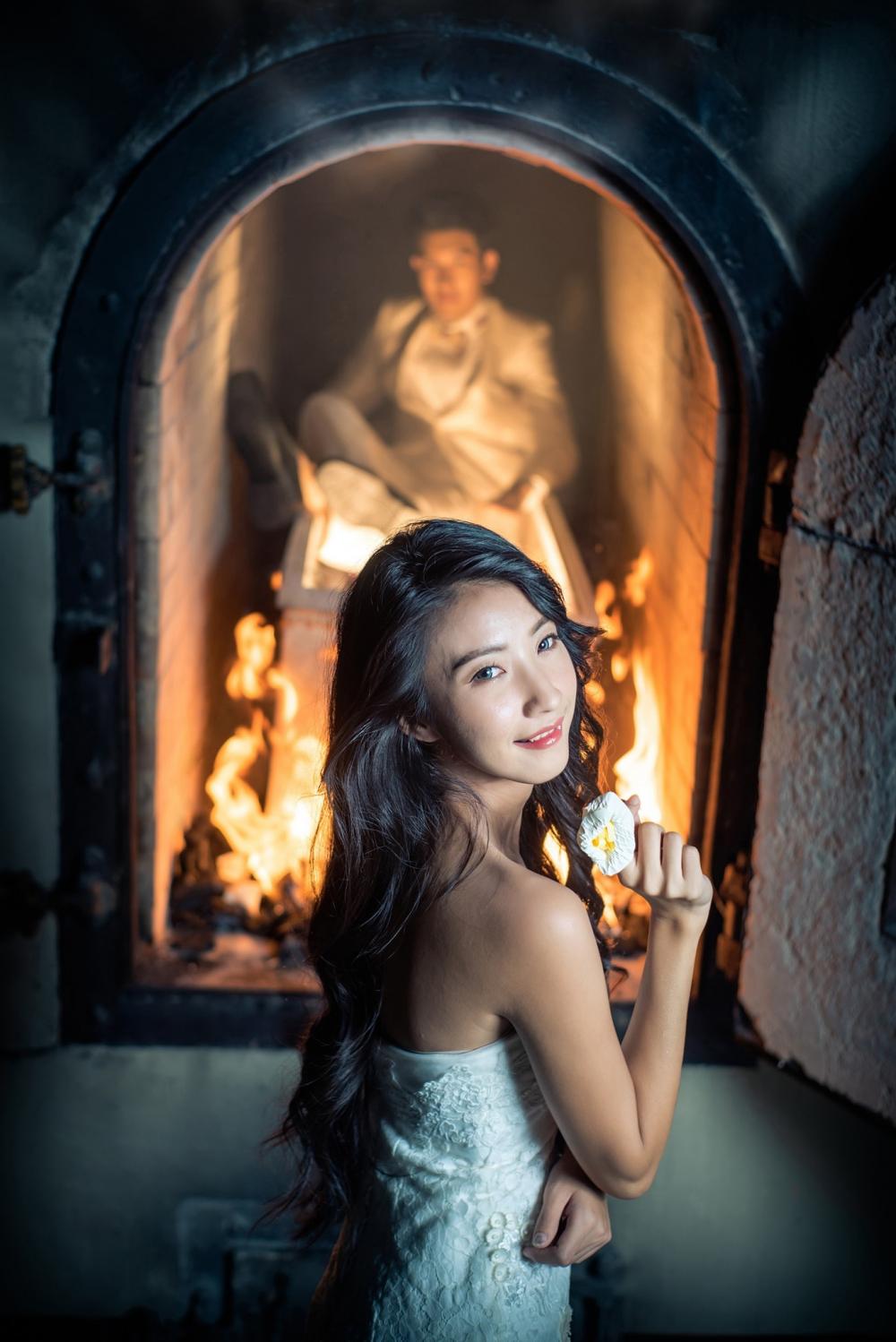 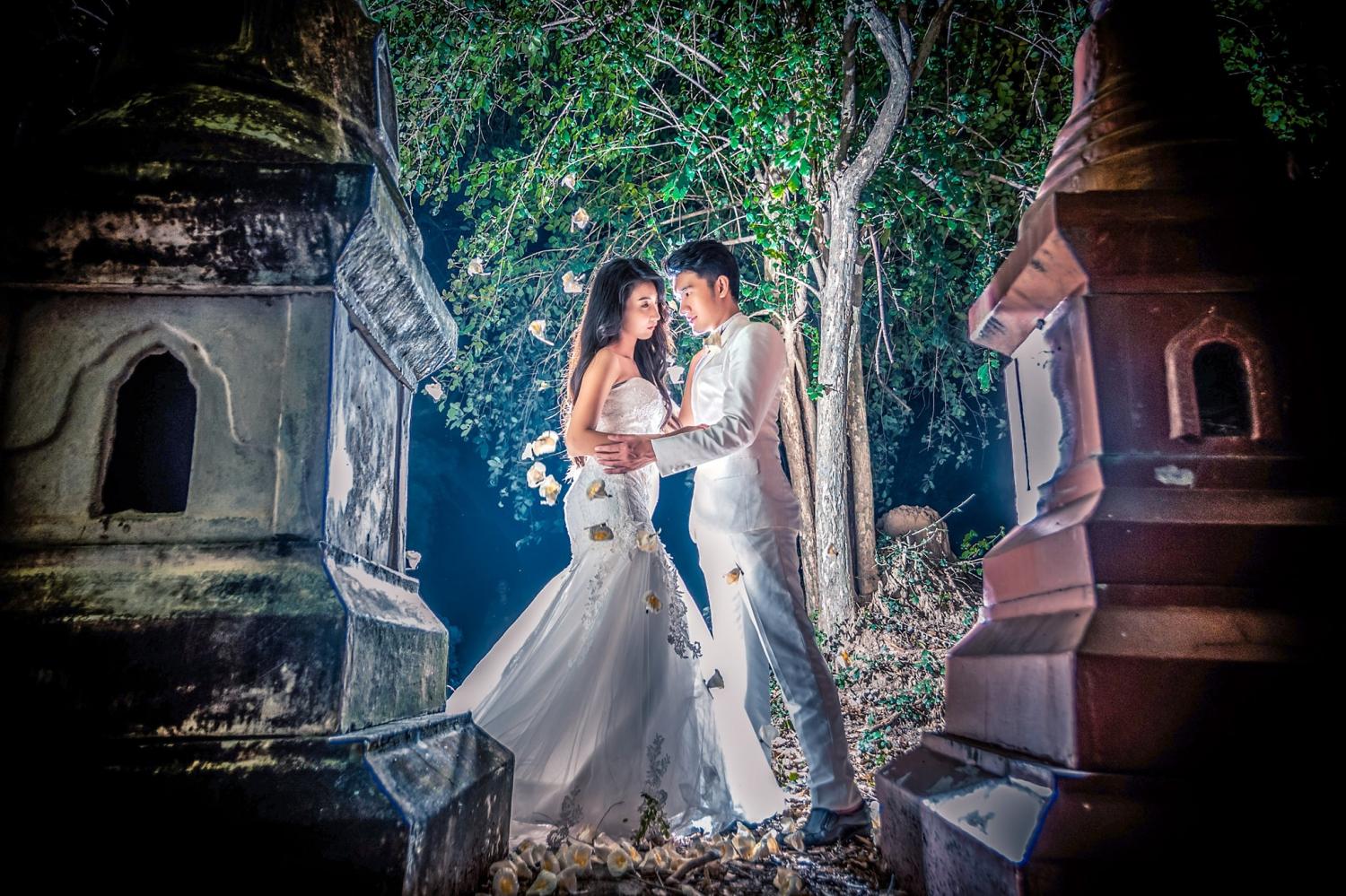 Talk about death becoming them! Netizens were quick to spot a blurry old man that was captured in one of their cemetery pictures. According to Krungthep Turakit, Nonts later revealed that these pictures were just for show as he met "his bride" in university, where they became friends. She agreed to the photoshoot after he couldn't find any models to agree with his creepy concept. He went to a temple in Nakhon Pathom with his fake bride and a crew of four. Creepy gimmicks aside, you can't deny that these pictures were beautifully choreographed and lit, thanks to Nonts who came up with the concept.

If you want to make your friends and family smile (or even giggle), consider miniature photography for your pre-wedding photos. Go to Kon Tue Lek (small person, fb.com/kontuelek69) photographer Facebook page where you can find pre-wedding pictures of many Thai couples in their miniaturised versions in action-filled and humourous scenarios. The only limitation is your imagination. Couples can be photographed fighting Covid-19 with a bottle of alcohol spray or hiding from it behind a giant face mask. If you two want to walk down "the aisle" on a path made of face masks, no problemo. Want to ride your dog together? That can be arranged (in a picture), too. I recommend checking out the page even though you're not the marrying type just to see the cuteness, creativity and humour. Soon-to-wed couples, if you're interested in their service, their next availability is from April onward. 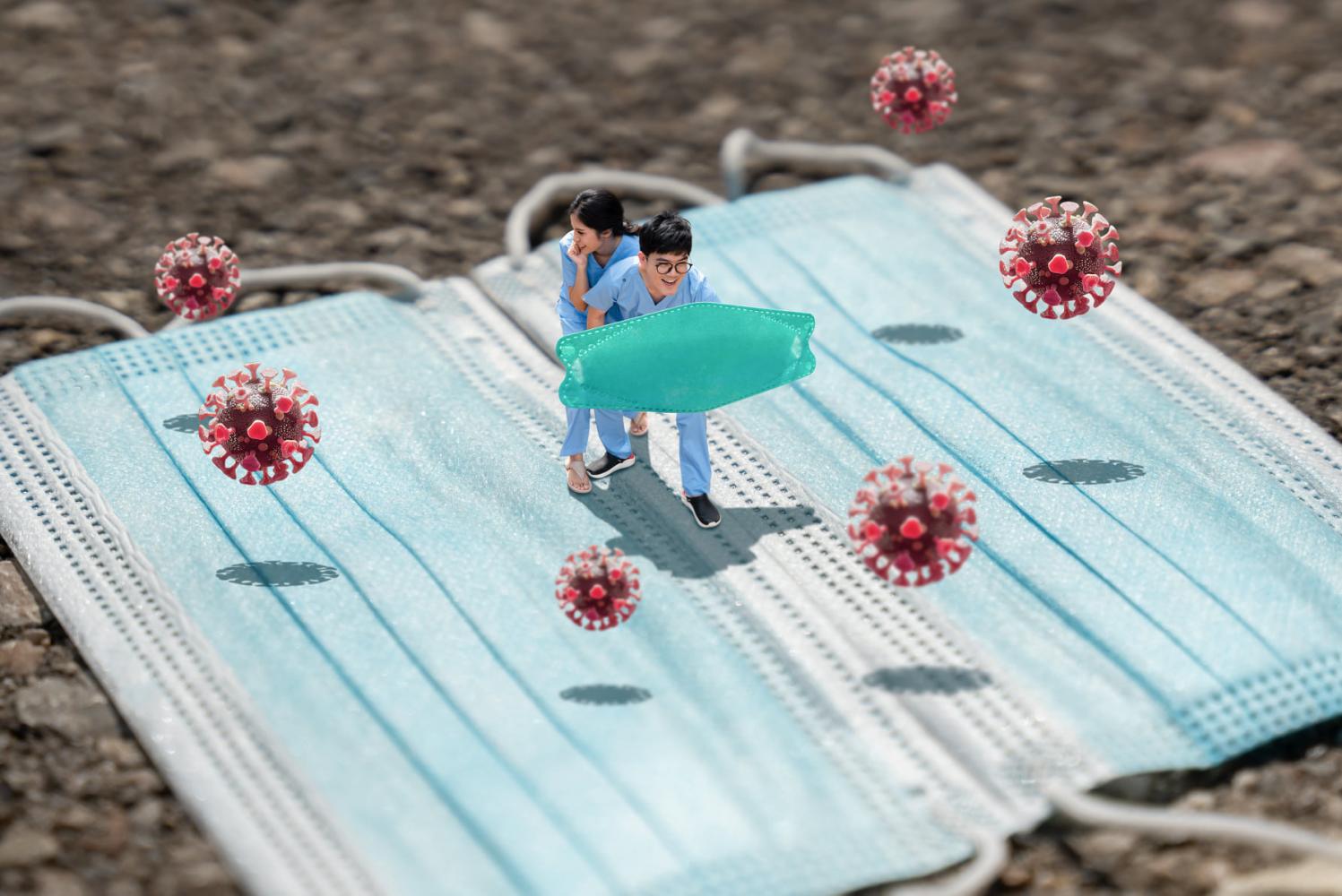 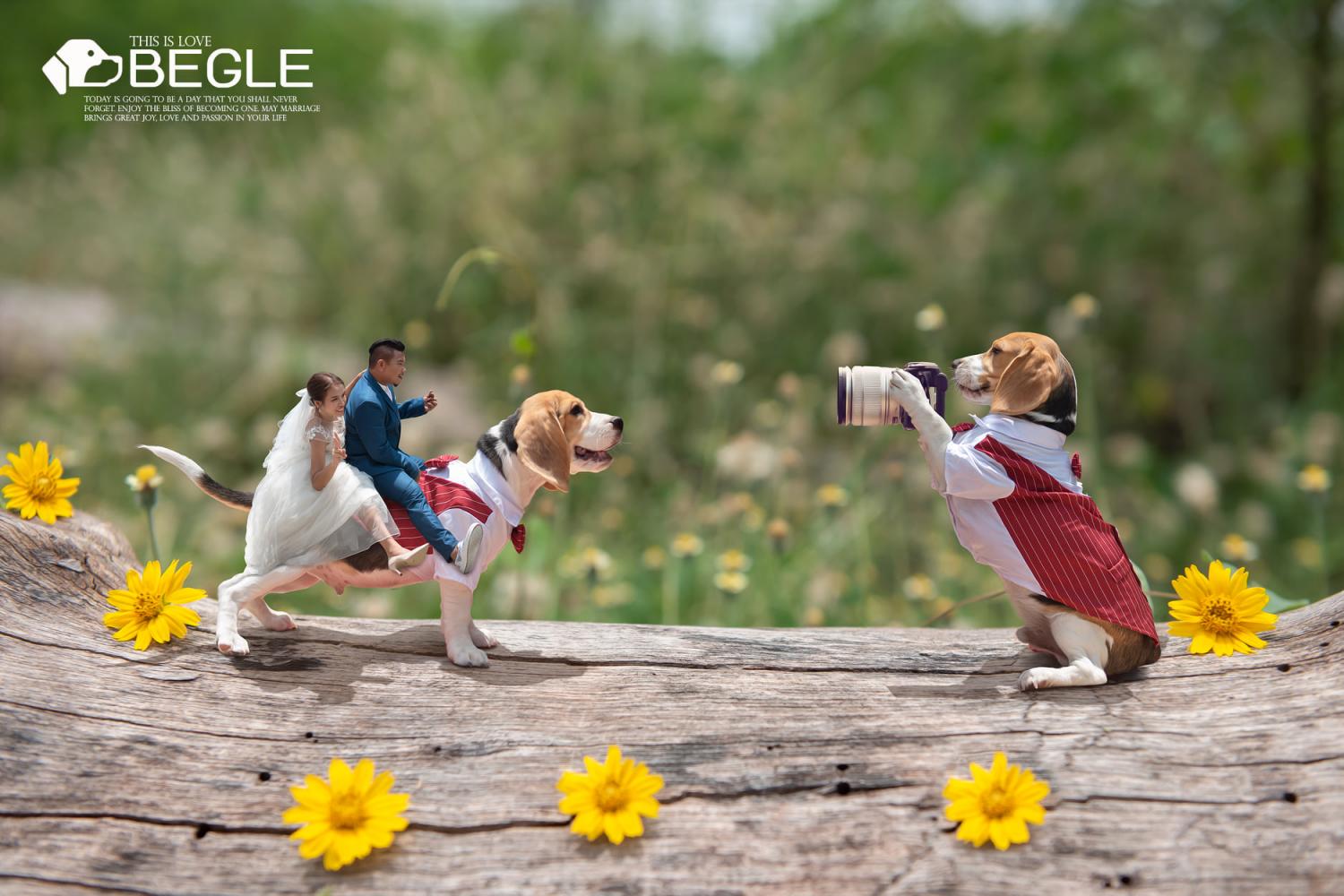