The politics of the term-limit wrangle
Opinion

Time is not on the side of Prime Minister Prayut Chan-o-cha as various groups of people want to see the back of him. Now that he has survived the last of four no-confidence votes in parliament since the March 2019 election, many are pinning their hopes that the eight-year prime ministerial term limit will upend Gen Prayut's rule. 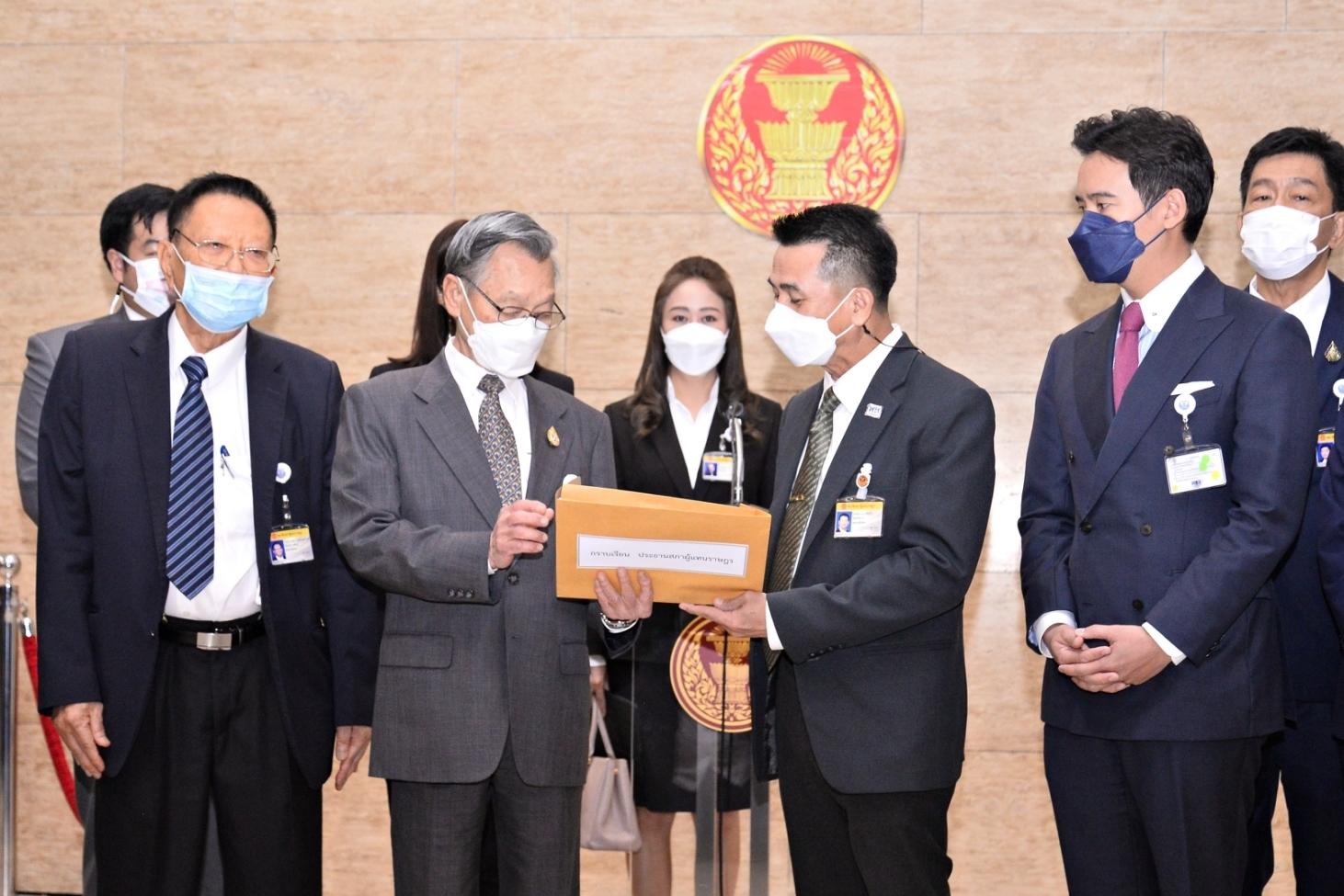 Leader of the opposition and Pheu Thai Party chief Cholnan Srikaew along with MPs from opposition parties submit a petition to House Speaker Chuan Leekpai asking the Constitutional Court to rule on the term of Prime Minister Prayut Chan-o-cha on Wednesday. (Parliament Photo)

Some are even urging him to dissolve parliament before the outcome of the term limit controversy in order to stay on as caretake prime minister for up to five months during the poll organisation, its results, and the formation of a coalition government thereafter.

Yet as he has survived political crises time and again, Gen Prayut is likely to somehow soldier on, pinning his hopes on getting protection from key agencies of which some of the latest members were appointed during the coup era, led by the Constitutional Court. The nine-member bench, after all, was appointed during the latest coup.

At issue in this latest controversy is Article 158 of the 2017 Constitution, stipulating an eight-year term limit for the prime minister's combined tenure, dating to Aug 24, 2014. Given this eight-year cumulative cap, Gen Prayut is in the hot seat as speculation mounts about whether his departure is imminent. As he has been prime minister since seizing the reins of power with the putsch in May 2014, Gen Prayut's premiership officially started with royal endorsement in August 2014, despite the promulgation of the conservative pro-military constitution in April 2017 that led to the March 2019 election, which returned the former junta leader as head of a coalition government.

While his political longevity is at odds with diminishing public trust in his rule, Gen Prayut has benefited from landmark decisions that have kept him in power and his opponents off balance. The opposition Move Forward Party, for example, had to absorb the dissolution of its precursor and third-largest election winner, the Future Forward Party, in February 2020 due to the rulings of the Election Commission and Constitutional Court.

On the other hand, Pheu Thai was the largest winning party in the last poll but had to cede its advantage to the second-largest and now-ruling Palang Pracharath Party (PPRP), which gained a critical mass in the 750-strong parliament with the support of 250 junta-appointed senators. The PPRP was then able to cobble together scattered small parties and their representatives, including a host of parties with single members of parliament, to back Gen Prayut at the helm. When it came to the legal requirement for cabinet members to declare their assets for transparency and accountability, the National Anti-Corruption Commission exempted Gen Prayut because he took office before the law came into effect.

The long list of these one-way decisions in support of Gen Prayut is so self-evident that the upcoming Constitutional Court decision on the term limit seems a foregone conclusion. It is ironic that the term-limit clause was meant not for Gen Prayut but his self-exiled nemesis, Thaksin Shinawatra, who has dominated Thai politics over the past two decades, currently overshadowing the Pheu Thai Party. These trends suggest that Thai politics is in a new round of brinkmanship because pressure from the general public and the parliamentary opposition is reaching another high point to get rid of the deeply unpopular prime minister.

It the unlikely scenario that the Constitutional Court goes against him, Gen Prayut's ouster would be tantamount to a political tsunami. The electoral slate would be wiped clean, with an election coming sooner than expected. But what is far more likely is that Gen Prayut will be able to limp towards the end of his term beyond the eight-year limit.

One constitutional way out for Gen Prayut is for the Court to count the eight-year clock from April 2017 or after March 2019 rather than the literal August 2014 when Gen Prayut as head of the junta government began his first day in office.

Gen Prayut's supporters also argue that he needs to stay in in office because Thailand will host the Asia-Pacific Economic Cooperation (Apec) summit this November.

Gen Prayut himself has shown no willingness to step aside. In the event he stays through Apec, he may call a general election early next year before it is due to claim that he does not want to cling to power. Other favourable signals on the ground also suggest that he is likely to prevail. Deputy Prime Minister Prawit Wongsuwon, a fellow coup maker and power broker in the PPRP, openly asserted that Gen Prayut will stay in office for two more years without revealing his information source. Some of the drafters of the 2017 Constitution, while acknowledging that their internal discussions called for the clock to tick from 2014, now say their opinions were not an official consensus.

The prevailing winds seem to still be blowing in Gen Prayut's favour and will likely nudge him through his term-limit crisis with constitutional fudging. It would be surprising if he is ejected from power in the near term. All this means that political tensions will build as public frustration with the politicised and partial judicial process and post-coup political system intensifies in view of the resurgence and restoration of the symbiotic military-monarchy axis in Thai politics. The ruling regime will be more suppressive and assertive to maintain power and may need to rely on more political manipulation and subversion in the lead-up to and after the next election.

Electoral forces for Thailand's democratic future will be hard pressed to get a fair shake at poll time because conservative forces will likely ensure that the new results end up with old outcomes from four years ago, plausibly with Gen Prayut still in charge unless a new front man emerges. Indeed, Thailand's old order appears unwilling to compromise without a showdown. As a result, the new generation who have little stake in the old system may well take to the streets again to retake what is owed to them after Thailand's two decades of going nowhere.