At cabinet meetings during Thailand's floods, migration was absent from the political agenda. No specific response was apparently required. Officials reported no "host agency" and neither the Labour, Interior nor Foreign ministries assumed direct responsibility. Law enforcement agencies monitor migrants closely and surely knew how the floods impacted on them, however. 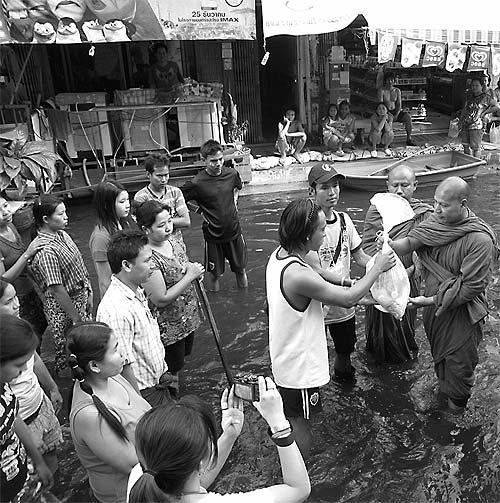 Thai monks distribute relief supplies to flood victims who are Burmese migrant workers, in Phetkasem area of Bangkok on Dec 9, 2011.

Many migrants from Myanmar, Cambodia, Laos and Vietnam were on the move during the crisis. For Thais, finding a place to stay with family or at crisis centres was challenging. More than 200,000 migrants faced similar challenges but, with exceptions of kindness and hospitality from some employers and communities, specific obstacles were also unfairly thrown in their way.

For migrants with passports affected by the floods, the freedom of movement they'd paid so much to unregulated brokers for, proved to be their lifeline. Many took buses to "legally" return to home countries or stay with friends in other provinces until the water receded. But once back to work, these workers faced an inflexible and the costly Immigration Bureau response to overstays and expired visas.

But for workers with flimsy registration receipts (the work permit has not been issued to most for over two years) or with no documents at all, the worst in migration management surfaced. Once workers left flooded provinces, opportunistic "brokers" set out to extort them, alongside officials, given that Thai law did not allow migrants to be anywhere but in those flooded provinces and in registered workplaces.

Packed up to 150 people in rented "private" six-wheeler trucks travelling to borders at night and clearly under the radar of corrupt officials, these workers were deported simply for being flood victims. It wasn't a free ride home either - 2,500 to 4,000 baht a head, shared between all those involved.

For migrants who wanted to stay put in unhygienic apartment blocks, aid deliveries were scarce and some nasty race relations came into play. For paperless workers who wanted to leave, mafia powers confined them to buildings with bolted doors in several areas. Officials didn't dare intervene. Reports suggest migrants were often refused entry to flood shelters too.

The Labour Ministry insists that it responded adequately to the migrants' plight. It set up a shelter housing 200 to 400 migrants at any time. Reports suggest government aid was not available to support the shelter so it relied on donations. The Myanmar embassy issued a few hundred documents there, but given no policy-level commitment, these were never recognised by Thai officials.

In hindsight, the migrant flood shelter, whilst necessary, proved more of a distraction, or was more likely an intended PR exercise to counter extensive rights violations migrants were facing outside.

Almost all Thai media, with notable exceptions, did not report on the violations facing migrant flood victims.

Despite a global remit, international media did in contrast provide extensive coverage on the important issue and one United Nations agency strongly intervened, creating some welcome diplomatic pressure. In short, a lack of migrant-specific responses, coupled with abuse of power and violations by some corrupt officials unavoidably occurred during an unprecedented crisis for the country and at what was otherwise a promising time for migration management in Thailand.

But more realistically, the floods highlighted embedded corruption and abuse of power that lie below the surface of the changing migration landscape in Thailand.

Prior to 2011, most migrants in Thailand remained paperless and registration processes remained opaque and bureaucratic for employers and workers alike. Abusive arrests saw migrants spinning into circles of extortion and deportation.

Regularisation, part of an assertion of the rule of law into two decades of a lawless system of migration management, had never been achieved.

Migrant rights protection had miserably failed by domestic standards, also evidenced by increasing interest from UN rights agencies and international media. Trafficking of migrants into labour and sexual exploitation had not been genuinely addressed.

But during 2011, positive developments were evident. A relatively successful regularisation push, albeit employer-led, saw registration soar towards two million.

After initial reluctance to take part in nationality verification (NV) with their home countries, to correct an unavoidable "unlawful" entry into the country, almost 750, 000 migrants (mostly from Myanmar) now possess temporary passports.

NV requires costly payment to unregulated brokers linked to officials on both sides of the border. The process has no linkage to civil registration in home countries. But migrants with freedom to travel (but not change employers) can apply for vehicle licences and are more confident in their improved status. NV is one solution to a bad situation and corruption, deeply entwined in the process, is tolerated.

At the end of 2011, Myanmar's Deputy Labour Minister Myint Thein made two trips to Thailand to engage on migrant protection. He was eager to ensure that all migrants from Myanmar became legal through NV. Five additional NV centres will open in Thailand next month to reduce costs and increase speed.

Since December a labour attache now works at the Myanmar embassy in Bangkok. At the height of the flood crisis, Myanmar authorities opened the Mae Sot-Myawaddy Friendship Bridge in Tak province, to ease the suffering of returning flood victims extorted on both sides.

Thailand and Myanmar are showing increased interest and commitment to legal worker "import", targeting plentiful labour from an undeveloped and still sanctioned country. This would contribute to ending two decades of smuggling, given employers' dependence on millions of migrants and policy-makers who didn't prioritise legal migration channels so as to ensure a profitable and irregular status quo.

Appalling stories by fishermen of abuse means this sector remains under scrutiny. Industry leaders deny the problems, which doesn't bode well for the strong response required to address them. Thailand's fishing industry is now globally viewed as dependent on trafficking to keep boats at sea.

Increased social protection for migrants has proved an unfulfilled promise. A majority of workers are now unable to access any health insurance as employers fail to register them for social security. Deaths have already occurred. Five years of campaigning for migrant work accident compensation, which included the International Labour Organisation and UN intervention, has seen no improvement.

The right to organise is still denied to all migrants in Thailand, and law enforcement and immigration officials continue to use all means possible to extort money from workers and their employers.

A Tier-3 ranking in the US State Department's 2011 Trafficking in Persons report is increasingly inevitable if Thailand does not ensure a concerted policy-level response to prevent labour trafficking and to prosecute offenders. The UN Special Rapporteur on Trafficking, Joy Ezeilo, has written up a damning yet accurate 2011 assessment of the abusive situation in the country, which has yet to see any genuine response.

Reflecting on Thailand's migration landscape, whatever positive developments are discernible from the past years, scratch below the surface and impunity and abuse of power seem ingrained, waiting to adapt to any cosmetic changes that are made. A well-thought-out, long-term migration policy for Thailand that equally promotes economic, national and human security for migrants, employers and Thai communities, and which creates a holistic, independent and effective migration management body, remains absent.

NV and import processes should be kept effective, cost-efficient and monitored for abuses to achieve what policy-makers insist is their admirable goal of transparency, legality and rights protection.

Myanmar's expanding role in migration management will be closely scrutinised in 2012. If abuses occur in its planned recruitment systems, officials should be quick to respond before they become ingrained, as is Thailand's case. Instead of responding, Cambodia, Laos and Vietnam remain too quiet towards all the similar challenges their workers face in Thailand.

Domestic media should start to understand the migration debate more clearly and objectively. Diplomats should be ready to play the "trade" card in the face of exports to their countries that are undeniably linked to migrant rights violations, particularly forced labour and trafficking in fisheries.

Thailand and its neighbours should take a lead, alongside the Philippines, in pushing for the long-awaited Asean framework on migration, to ensure holistic regional solutions to migration challenges which currently receive only weak bilateral responses.

Migrants from Myanmar are planning for the day (which they hope will come much sooner now) when they can return home. Thailand may well soon be forced to combat the ingrained impunity that has characterised migration management here for so long, if it hopes to keep these essential workers as part of the labour force.