Politics is on the boil again after the armed forces, led by both the army chief and supreme commander, came out to oppose the Nitirat group in its attempt to seek an amendment to Section 112 of the Criminal Code. 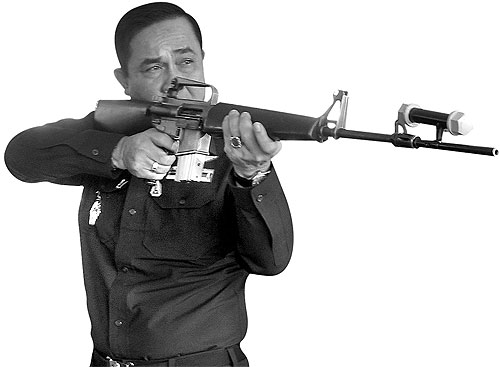 Taking aim: The army chief makes no bones about his firm opposition to any attempt to meddle with the lese majeste law.

It began with a statement from Gen Boonlert Kaeoprasit, chairman of the Armed Forces Academies Preparatory School Foundation and leader of Class 1, who recently urged all soldiers to protect the monarchy. He warned of a possible coup if there was no respect for highest institution of the land.

Then followed a move from army chief Gen Prayuth Chan-ocha, who made it plainly clear that he was the front man against any bid to amend the lese majeste law. He said those in support of such an amendment should "go and live abroad". He also delivered a verbal punch to Nitirat: "If you guys play hard ball, I'll have no choice but to do so, too." And then he pointedly asked members of the group, "Were you born in Thailand?"

He later quipped, "Are they Nitirat or Nitired?" This was a pun on the red shirts of the United Front for Democracy Against Dictatorship (UDD).

The armed forces are fully supportive of Gen Prayuth in the fight against Nitirat on this issue, given the military's role of protecting the monarchy. As a soldier close to the royal institution and a friend of the army chief in Class 12 of the school, Supreme Commander Gen Thanasak Patimapakorn quickly joined the campaign against Nitirat.

On Feb 3, he declared, "The armed forces are against amending Section 112. Personally, I strongly oppose it."

The monarchy has done so many things for the people and Their Majesties have tirelessly dedicated themselves to the happiness of their subjects, he added.

Gen Thanasak also criticised overseas-educated academics who support the amendment: "They have freedom of expression and the right to organise a campaign. But they should not forget that they are Thai."

But there is one thing the armed forces will not do, said the supreme commander. "Soldiers cannot take the lead by organising a rally against the amendment. What they can do is to show their position through the media."

In regard to Nitirat's motives, he said, "I wonder whether they have any hidden agenda."

Gen Thanasak's position reflects that of other armed forces leaders, including navy chief ACM Surasak Rounroengrom and air force leader ACM Itthaporn Subha-wong. The reason given is that, in this matter, all commanders speak with one voice. Given the size of the navy and air force, it was natural for ACM Surasak and ACM Itthaporn to let Gen Prayuth and Gen Thanasak lead the move against Nitirat.

As the most powerful force that has played a key role in times of political crises, the army has also deployed officials from the Internal Security Operations Command to play a "behind-the-scenes" role in countering Nitirat.

Despite (or because of) the statement from Gen Prayuth, the political dust did not settle, which prompted the army chief to come out again: "The armed forces are duty-bound to protect the monarchy. We will not stand still. I myself am against the amendment or any attempt to touch Section 112, because Thailand and the royal institution cannot be separated."

It is undeniable that the armed forces played a major role in removing then prime minister Thaksin Shinawatra in the Sept 19, 2006 coup, following "amatya" suspicions that some people in Thaksin's circle and his then Thai Rak Thai Party were less than loyal to the monarchy. But the military's power six years ago could not prevent Thaksin from returning to administrative power through the Pheu Thai Party, even though the former premier remained abroad to escape jail.

With Pheu Thai in power, the armed forces seem to be the only hope left for the anti-Thaksin groups, including the yellow shirts, to end Thaksin's political influence.

But all military leaders know very well that staging another coup will not be easy. They realise there is strong opposition from the red shirts; they have also apparently learned the lesson that administering the country after a coup is much more difficult.

Pheu Thai is wary of a coup but believes the armed forces will not do it this time because they would face public opposition which could turn the coup into a bloody tragedy.

The only thing the armed forces can do is not to turn to using force. They are using only their voice to tame those trying to put an end to the monarchy. And it is not surprising that this campaign is led by the two generals: Thanasak and Prayuth. Gen Thanasak is a Special Guard for Her Majesty the Queen and Gen Prayuth has been a member of the Queen's Guard for all of his military career, as an alumni of the 21st Infantry Regiment of the Queen's Guard in Chon Buri.

But do not blink, as anything can happen in Thai politics.

Wassana Nanuam reports on military affairs for the Bangkok Post.