A plague of legal scholars seeking to subvert ethics
Opinion

A plague of legal scholars seeking to subvert ethics

Nitirat is not pronounced "nitty rat" and does not mean "a rat with nits (baby lice)". The word, derived from Pali and Sanskrit, translates as "ethics of the citizenry" and in today's parlance means political science. In Thai, it is written one way (Nitirasadorn) and pronounced another (Nitiraad), giving one the impression that what you see isn't quite what you get. Which makes it an apt name for the group of lecturers whose recent lallations about the lese majeste law have caused alarm in certain quarters and made people wonder what's brewing in the political pot. So let us tackle Nitirat head-on, questioning it as we would an individual whose motives are suspect. 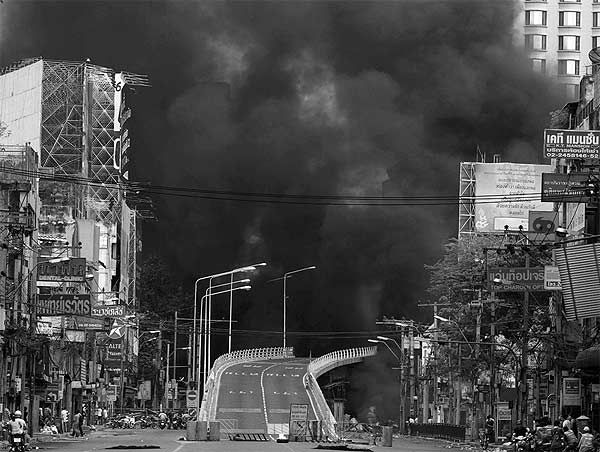 Lest we forget: A scene of the May 2010 strife which brought Bangkok to a fiery, fearful standstill. The red shirts who sparked widespread terror are now being ‘‘compensated’’ as victims, by the government of Thaksin’s sister.

Khun Nitirat, your professed aim is to foster peace and prosperity in this country, protect the highest institution from the slings and arrows of plebeian politics and strengthen democracy - your brand, no doubt, of Western corporate-controlled democracy, with which you became so enamoured whilst pursuing a doctorate in Germany that was funded by a royal scholarship.

First you proposed that we reconcile the colour scheme of our political landscape through hypnotism on a massive scale: if people can't forgive then let's make them forget it ever happened, right? By using Kenny Craig's mantra, "Look into my eyes, look into my eyes, not around my eyes but into my eyes..." hey presto! the collective memory card is wiped and swiped and the mind is rendered blank like one's bank account.

The only hitch, Niti, is that your proposal says our nightmare began not on the night before Christmas, but with the coup of Sept 19, 2006. In other words, the military is to blame for everything that followed. Such as the storming of the 2009 Asean leaders' meeting in Pattaya that sent heads of government scurrying unceremoniously for their safety, the murderous attack on the prime minister's vehicle at the Interior Ministry, and the burning of Bangkok in 2010 as Thaksin incited his red shirts to rampage, via video-link from abroad. One year you're a terrorist, the next you're running the government. Amazing Thailand!

But then the Truth Commission outmanoeuvred you by suggesting, correctly, that any backward tumblings in the haystack of time would have to go all the way back to 2001, when Thaksin committed his "honest mistake" - the one and only, we believe, as all his other mistakes were undoubtedly dishonest, judging from his actions all the way up to the Supreme Court's guilty verdict a decade later.

While your real intention, 'Rat, is to punish the military by placing the armed forces directly under the government's control, the expressed reasoning is that this would allow the government to better protect the monarchy - from a military that is already bound by oath to faithfully protect king and country.

And who's to say a majority government will not place its own people in top military and security positions, declare a coup on its own legislature and launch an autocracy, whereupon our absconding megalomaniac will return home victorious and assume the title of Somdej, like his friend "Samdech" Hun Sen? Filling the civil service, the military and police force with their own cronies has been attempted before - quite successfully, one might add. The country was only saved in the nick of time, when the witching hour turned your stooges into tomatoes and watermelons.

"Democracy is the means to an end, not the end itself." Remember who said that? Yes, Thaksin. So don't sit there like ethical vermin, all cool and collected, spinning fiction about a democratic utopia. I put it to you, Nitrate, that under the pretext of protecting the monarchy, you are instigating an upheaval that seeks to subsume and subjugate both the authority of the crown and that of the crown's sworn protectors, so that complete power will rest in the hands of the government - a government which, with a majority of seats in parliament, can legislate into law whatever it fancies. To seek an amnesty is one thing, to seek unbridled power is truly horrifying. Because who will mind the minders?

A ruler's power derives from his people, he represents their voice - in spite of our elected politicians who claim they speak on our behalf every time they utter nonsense. And you propose to silence the voice of an entire country by not permitting the king to address the public? As it is, we don't get to hear him often enough, and you would have him not speak freely to his subjects at all? What about his freedom of speech? It appears your ostensible promotion of free speech would in reality impose a great silence. Which leaves us quite dumbstruck, indeed.

Pray tell, what's step two? Change the way people address their sovereign? If you think hoovering away the dust-motes of la-ong dhuli will bring your kramom that bit closer to phra baat, then don't be surprised if you cop a royal kick in your presumptuous teeth.

Next, your proposal that the head of state swear an oath to protect the charter is causing people with weak constitutions much belly-ache, brought on by undue anxiety over the likelihood that the next king will be swearing a lot - considering that during the past 80 years this country has averaged a new constitution every 4.7 years. You say such an oath would protect the constitution. Do you realise you are asking the crown to protect the very instrument that usurped its powers in the first place? That aside, what you are attempting, Nightie, is the transference of a respect which binds the people to their monarch, onto a legislated tome whose binding keeps coming apart. In fact, one may truthfully claim that in the political history of modern Thailand, it has been the king alone who has strictly and most conscientiously followed the constitution - all 17 of them - right down to the letter.

This government may vociferously and publicly distance itself from your drama of democracy, but it does not take a genius to discern the seemingly disparate threads that connect to form the diaphanous web at whose centre squats venomous wayn-kam: "In friendship false, implacable in hate, Resolved to ruin or to rule the state." (John Dryden, 1681). A plot hatched at the turn of the century in Finland (or was it Oslo?) is now being fine-tuned by Amsterdam, no?

Commenting on the events of 2010 (and identifying Thaksin as "a former Carlyle Group adviser" backed by a long list of foreign corporations that stood to profit greatly from a Thai-US FTA agreement which Thaksin tried but failed to push through before he was pushed out), journalist Tony Cartalucci writes on April 24, 2011: "It will be difficult for even the International Crisis Group and its army of media pundits to spin this [the red shirt agitation] as anything but an illegitimate nepotistic dictator clawing his way back into power with an army of duped farmers, lied to and exploited - and quite literally indoctrinated in political education camps."

So, would we be that far off the mark in saying that Nitirat's actions seek to exonerate and empower Thaksin, whose clique of greedy global gobblers are salivating at the gates waiting to unleash their New World Disorder on us?

Definitely Machiavellian, this plot. But if you really were politically astute, you wouldn't be taking your tips from an Italian manual. A far more powerful treatise is available in the East which predates Machiavelli by at least 1,800 years: the Arthashastra (The Science of Material Success) by Chanakya, the genius behind the throne who masterminded the creation of the first Indian empire in the 4th century BC. Chanakya was the man who pioneered the art of economics and political science in Asia two millennia before the West entered its Age of Reason in the 18th century. His Nitishastra (Science of Ethics) is a treatise on the ideal way of life which shows Chanakya's deep understanding of every aspect of the human condition: "One attains high status only by one's good qualities, not by sitting on a high seat. Can a crow turn into Garuda even though it may nest at the top of the Burj?" (Embellished, certainly, but it's still his quote.)

Chanakya was a young teacher at Taxila University (in present-day Pakistan) when Alexander popped in one morning circa 320 BC to seek admission. He was turned down after failing to pass the English test, and the rest is history... By the time of Chanakya's death in ripe old age, the Greek satraps had been successfully defeated and Emperor Ashoka, grandson of the king he'd installed, had spread Buddhism across the length and breadth of south and east Asia.

Chanakya also said, "With no practice, learning becomes poison." So, without further ado, we suggest that Nitirat should give up teaching altogether and, begging Grisham's pardon, set up a firm. Become an ambulance chaser and have the time of your life racing Por Teck Tung and Ruam Katanyu to the rescue of potential clients before they know what's hit them. But always remember: "Compassion is key if you are to court success." (Chanakya again. See, ethics is of the very essence, without it a principle cannot stand up to scrutiny. So don't charge your victimised clients an arm and a leg, especially if they've been amputated.)

In conclusion, Nitirat should give up trying to change the past even if it were as recent as yesterday. "Not heaven itself upon the past has power" (Dryden), and neither should Nitirat try to make manifest in the present that which is best left to the future. Render unto Caesar what is Caesar's and let the monarchy see to its own reforming. That would be the right course of action for a law-abiding citizen schooled in ethics.