The myth of 'good friends'
Opinion

The myth of 'good friends'

In the immediate wake of last week's bombing crisis, the foreign ministry of Iran spoke out strongly. Unfortunately, the statement by spokesman Ramin Mehmanparast was neither helpful nor believable. 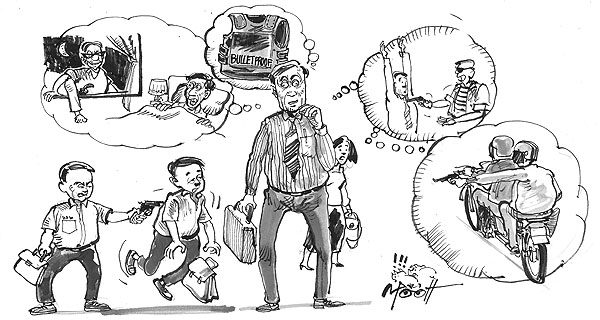 It is troubling, then, that almost a week has gone by without an offer by Iran to help in the aftermath of this event. There are three Iranian citizens in custody in the case. A fourth has been publicly identified, and others are involved in the investigation. One would expect the Iranian government to take an interest in the evolving problem. In fact, no concern has been seen, either from Teheran or from the Iranian embassy in Bangkok.

The only public reaction from Iran so far has been the statement from Mr Mehmanparast. He alleged that last Tuesday's explosions were "efforts by Israel to harm the friendly relations between Thailand and Iran". Nearly a week after explosives ripped the roof from a Sukhumvit Soi 71 house, this must rank as the least informed remark by a public official. He has not only stated one of the least likely conspiracies, he also has dragged Thailand directly into his bitter tirade against Israel.

It is a serious charge. According to the Iranian official, Thailand has ignored its "friendly relations" with Iran in dealing with a violent, dangerous group which harmed Thai citizens in their own capital. The Iranian government has not presented a shred of evidence to back up this serious allegation. Nor has Teheran exhibited any public friendship in an apparent incident of terrorism that involves several of its own citizens.

At least one prime suspect has fled Thailand and has apparently returned to Iran. But neither the government nor the Bangkok embassy of Iran has so much as offered to locate and question Leila Rohani, the frequent Bangkok visitor who is believed to have rented the house for the bomb-making suspects.

The Iran government should consider the role of "friends" in the wake of last week's violence. In public at least, Iranian authorities have shown no concern. There has been no attempt to provide background information on the three men arrested in Thailand and Malaysia, or of the other two or three suspects, who are probably in Iran. This is hardly a sign of friendship. Iran should also consider that this truculent dragging of Thailand into the centre of its relations with Israel will only encourage rumours and speculation that the Teheran government was involved in last week's explosive violence.

Thai relations with Iran since 1979 have been generally correct, if not friendly. The 1979 revolutionaries got off to a bad start by sheltering the separatist Pulo group, allowing it to use Teheran as a propaganda base. In the 1980s, it launched a massive propaganda effort among Muslims in Thailand to recruit members of Sunni mosques to Shi'ism. In 1991, Iranian "diplomats" were found with guns, explosives and plans to attack US and British interests in Bangkok; that incident is over but remembered.

Thailand and Iran conducted trade worth more than 30 billion baht last year, with a surplus in our favour. Last year, almost 150,000 Iranian tourists visited the country. There are many positive signs. However, Iran has again harmed its image by its public disinterest in extreme violence by its citizens in Thailand. One hopes that Teheran and the Iranian embassy will offer more helpful aid in investigating this group of terrorists.