Setting out to replant forests
Opinion

Setting out to replant forests

His Majesty the King's message is clear: Revive the forests. Severe flooding downstream cannot be prevented if severe deforestation continues unabated upstream. Protect the rain-catchment forest. Restore forest ecology. And punish corrupt officials. This, in sum, is what the King told Prime Minister Yingluck Shinawatra and her flood management team during a royal audience last week. 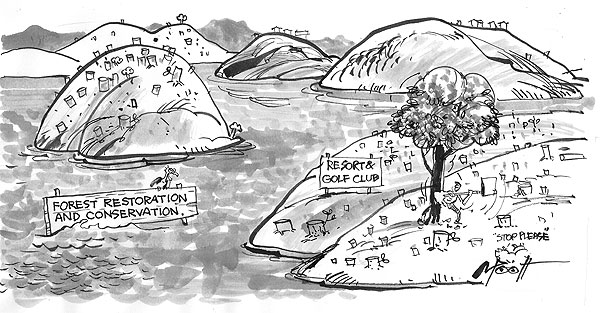 In a prompt policy response, the government announced it would allocate 3 billion baht to reforest and rehabilitate forest ecology across 7 million rai of land.

The state agencies in charge are the Forestry Department and the Department of National Parks, Wildlife and Plant Conservation.

Meanwhile, plans are also afoot at the powerful Strategic Formulation Committee for Reconstruction and Future Development (SCRF) to set up a reforestation corporation. The idea is to set up a business partnership between the government, private sector, local communities and local administrations, so as to preserve and rehabilitate rain-catchment forest areas, with royal reforestation projects serving as models.

While forest conservationists and local communities herald the royal advice on reforestation and restoration of forest ecology, there are grave concerns that good intentions could end up being abused.

Such concerns are grounded in the locals' long-standing struggle with the authorities' forest mismanagement.

In a tropical country like Thailand, the quickest way to let degraded forests grow back is through natural regeneration. In short, leave them alone with little human intervention. But this method does not allow the officials to make money from sales of saplings. For forestry officials, reforestation has meant denuding the areas through clear-cutting, so as to grow saplings, which often die due to lack of proper care. Forest authorities also use reforestation programmes to lease forest land to tree plantation investors. This is why we see "forests" of eucalyptus and oil palm sprouting in rain-catchment areas.

Since there are about 2,700 communities involving 1.2 million villagers living in national forests, such "reforestation" schemes have caused land rights conflicts between the locals and forestry officials nationwide. With their longstanding hostility to villagers and forest dwellers, it is feared that forest evictions will now intensify. The reforestation corporation project has also raised doubts among the locals, since top-down intentions often go awry when they bypass the villagers' real needs and deny them participation with outsiders on equal terms.

Many success stories in forest conservation share one common factor _ community ownership, which is linked to land rights security. Unfortunately, forest eviction is the authorities' main policy. Thousands of villagers are arrested and sent to jail each year, even though their families have for generations inhabited the land _ long before those areas were designated as national forests. Meanwhile land speculators and tree plantation investors, with the collusion of corrupt officials, are still able to take over genuine forest land.

This certainly has got to change. But for reforestation efforts to blossom and bear fruit, a system linking the villagers' land security with forest conservation efforts must be put in place. And for the royal advice on reforestation to work, the last admonition must also be scrupulously followed _ punish the corrupt officials. Only then will we be able to save our dwindling forests.