Tourists aboard a flight to Lampang last weekend were surprised when the control tower ordered their plane to circle the airport for an hour because visibility was below the safe 1,000-metre minimum required for landing. They had not realised the air quality was so bad. But the delay merely drew sighs from other passengers living in the northern city. They knew exactly what the trouble was. The choking haze caused each year by the burn-off of crop residue was back, blanketing the North and defying attempts by the authorities to prevent it. 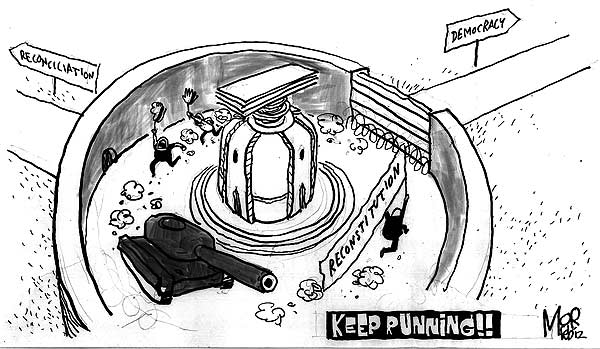 Perhaps residents might find the situation more tolerable if the haze were a rare freak of nature but it is not. It is a man-made phenomenon caused by the same kind of thoughtlessness and disregard for the environment that led to last year's floods. These were largely brought about by the selfish destruction of natural watercourses. This year we have chosen to burn down our home instead of flooding it, creating massive air pollution. The haze is caused by people who break the law and get away with it because authorities appear incapable of acting against them.

The question being asked is why it is so difficult to educate people into accepting that devastating slash and burn agriculture has no place in the 21st century. It scorches the land creating a massive eyesore, the fires get out of control as has happened in the Thung Yai Naresuan Wildlife Sanctuary, it kills off wildlife and people fall ill and some suffer an early death.

The situation is particularly bad in Phayao, Lamphun and Chiang Rai where hospitals have been treating 2,500-3,000 respiratory and eye inflammation cases a day, all victims of the acrid smoke generated by this annual practice of burning off fields, leaves, rice straw, garbage and grasses ahead of the next planting season. Those flying over the region or driving regularly through it say that small-scale fires are erupting almost everywhere, polluting the air with particulate matter and making facemasks essential.

Authorities pinpoint the worst trouble spots as being Mae Sai district of Chiang Rai where tiny dust particles in the air reached a dangerous 305.6 microgrammes per cubic metre of air on Thursday and Pai district of Mae Hong Son. The haze is exacerbated by bushfires and smoke wafting across the border from Myanmar.

This year the Northeast is also afflicted by heavy burn-offs taking place in Chaiyaphum while other provinces east of Bangkok have not escaped unscathed. Minor respite has come in the form of cloud seeding operations, use of fire engines to spray residential neighbourhoods and a high-pressure area from China.

But lasting relief will only come with the rain season.

Every year history repeats itself and creates an intolerable situation for those living in or just visiting the North. In particular, tourism suffers greatly. It is unfair to simply expect people to continue to put up with a clearly avoidable situation. Health and forestry officials do launch campaigns to persuade landowners not to burn forests, rubbish or grass but these tend to lapse as soon as the haze dissipates. It is time to get tough and slap heavy fines and jail sentences on the actual owners of the land on which the fires are started, not just the farmers who plant their crops on it.

These same landowners ignored the Chiang Rai governor's invocation of the Disaster Prevention and Mitigation Act this week and a plea from health and tourism authorities to stop burning in the province and harming its people. They are not above the law. Let us see them face the legal consequences, which will also measure how seriously those in power take this problem.