The fires which are causing bad air quality in the North are in effect a poor man's revenge on us all. Poor farmers burn their fields since they can't afford any other method of weeding. Hill tribe people burn the common forest because it generates mushrooms after the first rains, which apparently earn them 2,000 baht a day at markets. 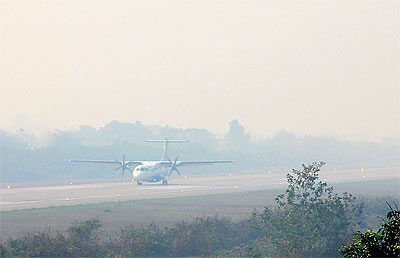 The police are too poorly staffed to catch a few offenders and make examples of them, and the average northern villager is too poorly educated to understand the hazards of an environment made smoky from routine burning of organic rubbish.

As for the poor officials, they just blame it all on the poor old people in Myanmar.

The ''solution'' is to be rich enough to afford air-conditioning and air purifiers, since no one else seems willing or able to tackle the underlying causes.

With regard to the fine column from Voranai Vanijaka in last Sunday's Bangkok Post, ''Values face off'', I am not only amazed but also dumbfounded that in Thailand a young man with sexual urges is subtly advised through the O-Net exam to go and play football with his friends.

What values are we talking about? The O-Net test preparation team must be nuts, and I am pretty sure they must be disappointed with all the wrong answers. It is quite clear from their tweets that the students are having the last laugh.

I arrived at Suvarnabhumi airport after a twelve-hour flight from England. The immigration process was absolute chaos, with very long queues. I waited two hours in line before it was my turn.

I have a problem with one leg, which means I should not stand for lengthy periods. After this experience at the airport I spent the next four days in my hotel, unable to walk any distance.

I will certainly not return again to Thailand.

KEEP A COOL HEART AT AIRPORT

I have noted in the past month the moaning and groaning of a few individuals over the immigration queues at Suvarnabhumi airport.

All of my 15 or so arrivals and departures at Suvarnabhumi in the past two year have been swift, and I've usually not had to endure more than three minutes of processing.

I would imagine that my experiences are representative of the majority of people. However, visitors and frequent travellers alike should always have tolerance and understanding when venturing to other countries and cultures.

Next time you take to the road or air, please remember the virtues of tolerance and understanding, or stay jai yen yen as we say in the Land of Smiles.

The governments of individual countries have the right to pass, revise and remove laws as circumstances arise. Why can't the United Nations do the same?

When you have a situation such as is now taking place in Syria, where human rights are being violated, the UN Security Council should be free, by a simple majority vote, to introduce resolutions to end the violence.

This positive and life-saving action should not be subject to veto by one or two countries who just happen to be friends of the human rights violator.

It's time to revise the Security Council regulations.

Saudi Arabia swings again -- but for how long?