Navy U-boats plan sunk, but all is not lost
Opinion

Navy U-boats plan sunk, but all is not lost

The navy's ambitious plan to equip its armada with submarines has been dashed after the deadline set by Germany passed with no progress from Thailand on the deal. 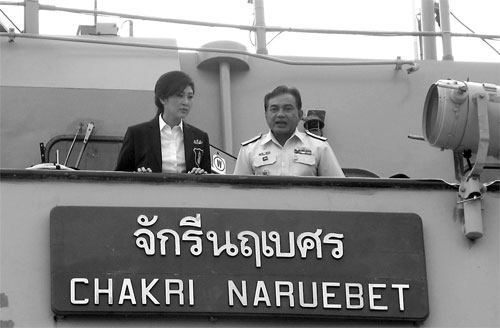 Navy chief Surasak Rounroengrom confirmed the 7.7 billion baht proposed project to buy six second-hand U206A submarines had come to an end. Germany was waiting for the answer from Thailand and was keen to seal the deal by extending the deadline from Feb 29 to the end of last month, but the extension was meaningless as the project had never been tabled for a cabinet meeting by Defence Minister Sukumpol Suwanatat.

A navy source said the proposed project had faced several stumbling blocks. First, there was a rumour the navy and the Defence Ministry had forwarded the plan to His Majesty the King for consideration. The navy still remembered His Majesty's advice made in his remarks on the eve of his birthday in 2007. The King said submarines might not be suitable for Thailand as the underwater vessels could be bogged down in mud in the Gulf of Thailand.

But Supreme Commander Tanasak Patimapakorn strongly denied the rumour. "Rumour is rumour. His Majesty was never involved in this issue," he said in a meeting with armed forces commanders at the navy head office on March 13.

A navy source said the rumour was spread as a tactic to block the plan to buy the German submarines.

Then, it was believed that Privy Council president Prem Tinsulanonda did not give the green light to the project and the plan was also attacked by many former and present navy officers who were disappointed at seeing themselves stranded or moved to unfavourable positions in the military reshuffle last year.

Whatever the reasons were, the navy chief admitted the project was at an end. "The navy has done its best [to push for the project]," said Adm Surasak and diplomatically thanked the government for its support.

Prime Minister Yingluck Shinawatra comforted the navy during her visit to the 2012 navy drill in the Gulf of Thailand on Monday, saying "there are other ways to protect the national interest at sea. The government supports the navy to bring in new technology to replace the old technology".

Since the submarine project ground to a halt, the navy is shifting its attention to another subject. This time, the source said, it is looking for a new fleet of frigates. The navy is working seriously on a proposal to buy two frigates, two anti-submarine helicopters and three off-shore patrol ships, the source added. In the long run, it also wants two more more frigates. The United Kingdom, France, India and China are among potential contenders to supply the helicopters to the navy, the source said.

Vice Admiral Thaweewut Pongpipat, the deputy commander-in-chief of the navy, backed a modern fleet to catch up with the armadas of neighbouring countries. "The navy has had to adjust the plan to protect sovereignty and national interest amid the changing global and regional situations after it could not get submarines," he said.

The disputed Spratly Islands are a reason for the need for other countries in Southeast and East Asia to modernise their navies to boost their leverage in these claims. The islands in the South China Sea believed to be rich in oil and gas are partially and wholly claimed by Brunei, China, Malaysia, the Philippines, Taiwan and Vietnam.

China plans to have three aircraft carriers and improve its navy bases. Beijing also has spent vast sums of money to develop its own version of the US stealth aircraft. Vietnam has ordered six Kilo-class submarines worth 100 billion baht from Russia. Malaysia's navy already has two French-manufactured submarines. Indonesia is revamping its German submarines and will buy more ships.

"It's time for those with authority to pay serious attention to modernising the Thai navy to protect our seas," Vice Adm Thaweewut said.

In addition to the possible flash point of the Spratly Islands which could destabilise the region, the navy's main concern are fast-depleting natural resources in the Gulf of Thailand. The oil and natural gas supplied to the country from 317 off-shore platforms will dry up in 10 years. The overlapping sea boundary between Thailand and Cambodia is believed to have reserves for at least two decades.

A potential conflict could come if the Cambodian government gives concessions in the unsettled areas to oil firms without consent from Thailand.

"If we have no navy protection looking after our national interest, Thailand will inevitably be damaged," Vice Adm Thaweewut warned.

Without submarines and new ships today, the navy has to live with "what it has" to cope with all security scenarios. It has a major drill once a year with the army and air force. In the future it will have data and other network links between the HTMS Chakri Naruebet, HTMS Taksin and HTMS Naresuan of the navy and the squadrons of Gripens and F16s, which are the main strengths of the air force.

It has joined other navies to garner experiences, including participation in the Combined Maritime Force to fight pirates off the Somalian coast and has sent 16 officers to join the Combined Task Force 151 with Rear Adm Thanin Likitwong as the first Thai being the task force commander operating from HTMS Fort Victoria of the United Kingdom for four months until July.

The navy also has cooperated with intelligence on private crackdown operations with navies under the umbrella of the North Atlantic Treaty Organisation (Nato) and another one under the EU.

It has undertaken a joint patrol along the Gulf of Aden with Oman, Yemen and Djibouti.

All are to achieve the one goal of the navy to use its international experience to better prepare to protect the nation without having submarines.

Wassana Nanuam reports on military affairs for the Bangkok Post.