There are two sides to the coin when it comes to the government's successful push for unconditional free treatment for emergency cases, regardless of a patient's healthcare benefits package, effective on Sunday. 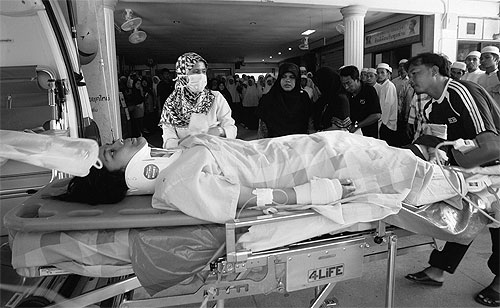 A Muslim student arrives for emergency treatment at a local hospital after a bomb blast in Pattani on March 17, 2012. The government has successfully passed a measure to provide free treatment for all emergency cases regardless of the status of a person’s healthcare coverage.

The Pheu Thai Party-led administration received plaudits from the public and from academics for this effort. The policy is aimed at narrowing the differences between the three existing healthcare schemes _ the Civil Servant's Welfare Fund (CSWF), the Social Security Fund (SSF) and the National Health Security Fund, better known as the universal healthcare programme.

The initiative, launched by Prime Minister Yingluck Shinawatra on Sunday, is a big step towards achieving equitable health services for all 65 million Thais _ at present, the three state health funds offer different benefits for their members. But merging all three schemes, if it is possible to do so, could make the healthcare sector vulnerable to greater political interference, similar to what the universal health care programme is facing already, given that billions of baht will be centralised in one purse.

The National Health Security Office (NHSO) oversees the universal health care programme, which provides coverage for 47 out of 65 million people in the country. The power struggle at the NHSO is more chaotic than ever under Ms Yingluck and her government. Doctors and civic groups continue to attack the government saying it has ulterior motives for shaking up the NHSO board, which has the authority to approve budgets worth hundreds of billions of baht.

Their disgruntled mood worsened even more after Public Health Minister Witthaya Buranasiri showed no sign of retreating from his bold move to appoint several new names to sit on the board, despite fierce opposition from rural doctors, academics and members of non-governmental organisations.

The NHSO board comprises 30 members from various fields including the medical, social and economic sectors.

Kanit Saengsuwan, former adviser to then deputy prime minister Olarn Chaiprawat and ex-board member of Thai Airways International, was one of seven new faces chosen by Mr Witthaya to replace those who had completed their two-year term on the board.

Most of the new board members are no strangers to politics. Some, like Mr Saengsuwan, have been involved directly in politics. Others have retired from politics to run businesses such as real estate development and continue to be involved by financially supportive politicians.

They stand on the opposite end of the spectrum to the rural doctors' camp, which has held the most seats in the board since the establishment of the NHSO 10 years ago. The rural doctors' position has been to fend off all efforts of present and past governments to bring the agency back under control of the ministry, which until the setting up of the NHSO had the authority to be a health purchaser.

A rift between the NHSO and the health providers' camp, including doctors, executives at the ministry, Medical Council members and private hospitals, is a result of changes due to the restructuring of the national health system over the past decade.

Launched in 2001, the universal health scheme caters for people who are not eligible for the CSWF and the SSF, with the latter designed to cover employees of the private sector. Universal health coverage has been proved to protect Thai families from going bankrupt from spending money on health care. It enables the majority of the population to have better access to healthcare services.

However, the dramatic increase in health expenditure from 56 billion baht in 2002 to an estimated 126 billion baht in 2011 left the NHSO no choice but to squeeze some benefits enjoyed by healthcare providers, according to Nualnoi Treerat, an academic at Chulalongkorn University's faculty of economics.

The agency saves at least 20 billion baht each year due to its policies on compulsory licensing, price negotiations and price controls on medicines for certain patients, including those living with HIV/Aids. Through this practice the NHSO has taken away huge benefits from the health marketing sector.

"As a health purchaser, the NHSO enables most Thais, who are the poor and the vulnerable, to gain the most benefits from the national health system. However, its work more or less affects service providers and others involved in the overall health care sector," said Ms Nualnoi in a recent seminar marking the 10th anniversary of the universal health care programme.

Those parties who had lost benefits and authority were trying to wrest back power by taking over the NHSO board, she added. Ms Nualnoi's claim was reflected in Mr Witthaya's successful attempt to put his men on the board.

A group of independent health economists and researchers from several countries provided suggestions for the future of the universal healthcare scheme. Their 10-year assessment recommended closer relations between healthcare providers, under the supervision of the ministry, and the NHSO as health purchaser.

The problems at the NHSO are still not over. It is yet to appoint a new secretary-general to replace Winai Sawasdiworn, who completed his term on Sunday. Nine candidates are vying for the position including Dr Winai himself and inspector for public health Thongchai Suengtavorn, who has close ties to a brother of Khunying Potjaman na Pombejra.

Another candidate, Somkiat Wattanasirichaikul, the former dean to Srinakarinwirote University's faculty of medicine, is believed to be supported by the Medical Council.

The appointment, expected to occur before the Songkran holidays, could provide an indication of whether political interference in the board continues or if there is resistance from those trying to protect the NHSO from politicians.

Apiradee Treerutkuarkul reports on health affairs for the Bangkok Post.