Fear of anarchy within Syria is leading to just that
Opinion

Fear of anarchy within Syria is leading to just that

The failure of US President Barack Obama's administration, its Western allies, and several Middle East regional powers to take bolder action to stop the carnage in Syria is often explained by their fear of anarchy. 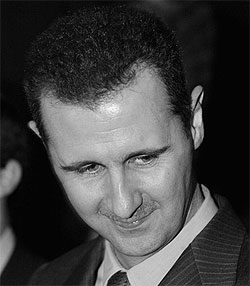 Syrian President Bashar al-Assad’s regime will eventually fall and there will be very little left of the country that his father built up.

Given the Syrian opposition's manifest ineffectiveness and disunity, so the argument goes, President Bashar al-Assad's fall, when it finally comes, will incite civil war, massacres, and chaos, which is likely to spill over Syria's borders, further destabilising weak neighbours such as Iraq and Lebanon, and leading, perhaps, to a regional crisis.

What is actually happening in Syria refutes this argument. In fact, the lingering crisis is corroding the fabric of Syrian society and government. Anarchy is setting in now: it is preceding, and precipitating, the regime's eventual fall.

The United States and others are substituting high rhetoric and symbolic punitive action for real action on Syria.

Sanctions on those involved in electronic warfare against the opposition's social media are not the answer to the shelling of civilian neighbourhoods in Homs and Deraa.

For several months, Russian and Chinese obstruction in the UN Security Council was both a real obstacle to more effective sanctions and a convenient veil for inaction. More recently, former UN secretary-general Kofi Annan's mission on behalf of the UN and the Arab League has come to play a similar role.

He dispatched a group of monitors to Syria in order to supervise the plan's implementation, and the UN is about to beef up that mission.

But, predictably, the Annan plan is not working, as Mr Annan himself, in a report to a closed-door session of the Security Council on April 25, came close to admitting.

Mr Annan did not proclaim failure, but he did describe the situation in Syria as "bleak". Clearly, the Annan mission gave the regime some breathing space and created a temporary illusion of political and diplomatic progress.

But, according to reports too numerous and too credible to discount, Mr Assad's regime (and to some extent his opponents) has not complied with the plan after signing on to it: troops were withdrawn from urban areas prior to inspection and returned when the monitors left. Neighbourhoods and individuals were brutally punished for complaining to or cooperating with the monitors.

But the breathing space provided to the regime does not offer it salvation. At first sight, the regime appears to be almost intact. The army and the security apparatus remain loyal, the cabinet has suffered few defections, and the key population centres of Damascus and Aleppo have not joined the rebellion.

But, in the country as a whole, government is failing. Entire areas are beyond control, public services are unavailable, and the economy is in free fall.

Mr Assad's fall does not yet seem imminent, but it has become inevitable. The regime has lost all legitimacy, and its effectiveness is weakening. When it finally crumbles, the powerful state built by Mr Assad's father, Hafez al-Assad, will hardly exist.

A cliche has been heard throughout the Syrian crisis: "Syria is not Libya." But another analogy may be more suitable. Syria may well become a second Iraq, not by design but as an unintended consequence of current policy.

The US occupiers of Iraq, through their policy of "de-Ba'athification", left Iraq without an army or a government, which proved a fertile ground for Sunni insurgents, al-Qaeda, and violent Shi'ite groups. In Syria, the ground is being prepared for a similar outcome, with a growing number of radicals heading to Syria and joining the opposition.

In this context, it is important to appreciate the difference between the "political" opposition and the local opposition groups waging the fight against the regime on the ground.

Groups like the Syrian National Council are loose associations of individuals and groups, many of them outside Syria. These are the groups criticised by the Obama administration and others for their failure to present a united front, formulate a credible agenda, or be seen as a viable alternative to the regime.

But these groups have little influence over local opposition groups inside Syria, which are equally diverse and divided.

It is among these groups that radical Islamists have gained a foothold. Fear of another Islamist takeover is a second main argument against toppling Mr Assad, but the longer he stays in power, the greater the gains made by Islamists on the ground.

The Obama administration, focused on the November presidential election, is not interested in having to deal with a major crisis in Syria in the coming months, and is preoccupied with the risk of being drawn into another military entanglement. Other actors, too, seem to prefer the apparently limited current crisis to the unknown alternatives.

But the compelling moral case for a humanitarian intervention is increasingly being reinforced by sound raisons d'etat.

Furthermore, military or semi-military intervention is not the only option on the table. As the sanctions imposed on Iran outside the Security Council clearly show, effective action can be taken to tilt the balance and end the deadly stalemate in Syria.

The current preference for inaction, while perhaps understandable, threatens to lead to precisely the outcomes that its advocates want to avoid.

Itamar Rabinovich, a former ambassador of Israel to the United States, is currently based at Tel Aviv University, New York University, and the Brookings Institution.