The constitution supposedly guarantees that every Thai "shall enjoy the liberty to express his or her opinion, make speeches, write, print, publicise and make expression by other means". It also says that writers and broadcasters employed by the mass media "shall enjoy their liberties to present news and express their opinions". 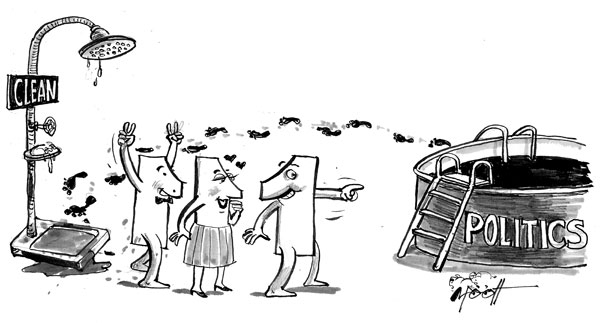 Unfortunately, neither of these articles of the supreme law is actually true. Thailand is still a country where even professional journalists are killed for trying to present news and opinions. And the rest of the world has very little respect for the country when it comes to press freedom.

Last Thursday was World Press Freedom Day. There was no acknowledgement of this by agencies and ministries charged with defending constitutional rights. The media itself saw no reason to celebrate. But the head of the United Nations and journalism groups in other countries did take note of the day. And most reports on World Press Freedom Day noted the low international regard for Thailand on the issue.

Reporters are increasingly at risk, for a number of reasons. Thailand is one of the few countries with the ignominious reputation of witnessing journalists being killed regularly without any ongoing war or violent conflict. There are only five such countries around the world _ the others being Brazil, India, Indonesia and the Philippines.

On Jan 12, a gunman in Phuket shot and killed the freelance reporter Wisut Tangwittayaporn, a familiar figure known as "Ae Inside" because he was a tenacious newsman. To their credit, Phuket police not only pursued the case, but actually indicted three suspects including the alleged killer and his motorcycle driver, both of whom are still at large.

The third suspect has been charged as the mastermind. He is Assadakorn "Pod" Seedokbuab, 48, who is not simply another influential Phuket figure, but one of the most influential. Mr Assadakorn, who is on bail for 3.4 million baht despite the serious charges, is vice-president of the Phuket Chamber of Commerce. He is the owner of a Phuket TV station, KPP Cable.

Police have not said why they think Mr Assadakorn arranged to kill Wisut. It is no secret in Phuket, however, that Wisut was about to release more stories about the very troubled housing market in Phuket. The real estate industry in the province has seen violence before, including other murders. We may never know exactly what Wisut was onto, but no one doubts it was his reporting that caused his violent death.

Two entirely separate surveys this year have rated Thailand's press freedom. Reporters Without Borders says the country ranks 137th in the world, with 61.5 out of a possible 100 freedom points. The US-based Freedom House gives Thailand 62 out of 100, good enough to tie the country with Libya, Liberia and Zambia in 132nd place in the world. Both drolly comment that Thailand's press freedom actually improved because of the end of the 2010 emergency decree invoked during the Bangkok violence.

This is a terrible performance by a country striving for real democracy. Successive governments have not only failed to protect press freedom, but have actually encouraged censorship with actions such as appointing the ICT ministry as official internet censor. A democratic government does not make such choices. Our authorities must support the constitution on freedom of information, or be branded as opponents of a free press.