This week's disclosure by the World Health Organisation that exhaust from diesel engines can cause lung cancer confirms a link that has been suspected for at least 20 years. The warning is significant because these are fumes that poison the air in large cities and worsen the plight of those suffering from asthma and other respiratory infections. In Bangkok, the Pollution Control Department has tried to protect air quality by setting up checkpoints to catch vehicles belching the fumes and ordering them off the streets, but the campaigns have been short-lived. 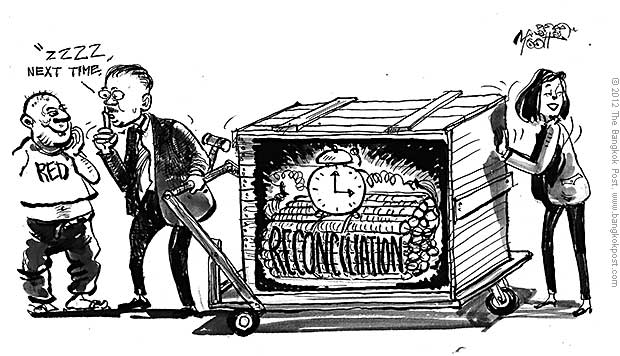 The problem in the past was the absence of overwhelming scientific and medical evidence that these exhaust fumes were as harmful as anti-pollution campaigners claimed they were. No one denied that the fumes caused headaches and other symptoms but most people had lived with bad smells for so long that familiarity had bred contempt. The absence of proof that the pollution was in any way a silent killer took the urgency out of campaigns for stiffer penalties and undermined moves for tough legislation to force cuts in exhaust emissions, even though these never seemed to gather much official support. To take action would have affected the commercial transport of goods and people which, in turn, could have slowed economic growth. Successive governments clearly considered air pollution to be the lesser of the two evils.

Now that exhaust fumes from diesel engines have been officially classified as a known cancer-causing agent, the element of doubt has been removed and these emissions now belong in the same dangerous category as asbestos, cadmium and aflatoxins and must be controlled and minimised within a set time frame. Modern diesel engines used in pick-ups and SUVs are a great deal cleaner than those in the past with lower emissions but still need to undergo checks.

Old-fashioned trucks, buses, generators, and farm and factory machinery routinely spew black smoke and fill the air with sulphurous particulates. And there are other carcinogens out there, most notably benzene, a dangerous chemical found in petrol, tobacco smoke and, regrettably, in the air that people breathe in Bangkok.

Although commercial vehicles, especially antiquated trucks, still belch out foul quantities of exhaust fumes, we can take pride in the number of buses, taxis and other vehicles now powered by natural gas or liquid petroleum gas and are emission-free. Equally encouraging is the increasing number of hybrid cars. But we would be deluding ourselves if we thought we had eliminated the lethal cocktail of chemicals that hung for so long over the capital. That smog is less than it was, but is still visible. By now we should have learned the danger of neglecting proper air quality management. When we take action, there should be no disputing the need to introduce effective air pollution prevention measures.

We need a determined clean air campaign which takes the form of an onslaught on all older and poorly maintained and toxic buses, cars, pick-up trucks, huge lorries and poorly-maintained motorcycles to get them off the roads with the same determination we employed to get lead removed from petrol. It is time to stop treating symptoms and instead concentrate on the root cause of most of Bangkok's pollution and that is the motor vehicle itself. That can be achieved through enforcement of tougher emission controls and regular inspections using the latest technologies, more and improved natural gas-powered public transport including greater use of skytrain and subway routes, cycling, walking and restricted traffic zones. And, of course, a 21st century lifestyle which puts the environment first.