Refugees deserve right to choose when to return home
Opinion

Refugees deserve right to choose when to return home

'When I met Myanmar migrant workers and refugees during my recent visit to Thailand, many cried out: 'Don't forget us!"' said Aung San Suu Kyi as the world watched her deliver her acceptance speech for the Nobel Peace Prize she was awarded 21 years ago. 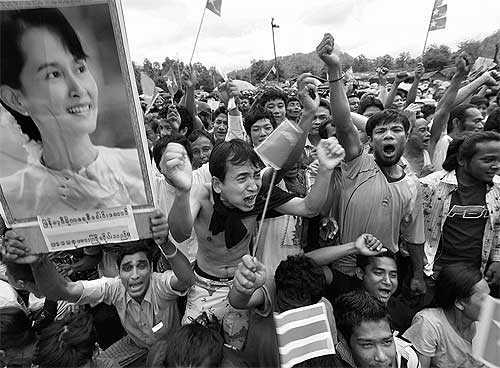 The timing could not have been better _ today is World Refugee Day.

Today, let us not forget them. Instead, let us remember why people left Myanmar. Let us listen to their voices as rhetoric about positive changes in Myanmar threatens to drown them out.

A refugee is anyone who has fled his or her country because of conflict and oppression to look for a refuge. The United Nations' definition aside, refugees are not just those registered in camps.

Refugees from Myanmar are all those who had to abandon their homeland to flee civil war, human rights abuses, oppression, forced displacement and discrimination.

They now live in camps on the border and in temporary hiding spots in the jungle, displaced from their homes.

Myanmar is changing and change has brought with it talk of refugees returning. However, one should pause for a moment and seriously consider whether the reasons these people fled their country have disappeared? Can they finally find a safe refuge in their homeland?

Ceasefires have been signed with some ethnic minorities, but most of the agreements are still at an early stage of negotiations and have not been implemented on the ground yet. And Myanmar's history shows that ceasefires can be broken and reforms can be reversed.

Even in those states where fighting has stopped, the areas which refugees would return to remain dangerously marked by landmines, as the Karen Human Rights Group documents in their recent report, "Uncertain Grounds".

Human rights abuses continue and are being exacerbated as the country opens up to investment.

The Karen Human Rights Group has also reported the ongoing use of forced labour by security forces.

Until development in Myanmar can take place without displacing locals and causing other human rights abuses, those who are displaced will continue to seek security and stability in neighbouring countries like Thailand.

These ongoing human rights abuses have a serious impact on a community's ability to pursue livelihoods and harms the chances of a safe return for refugees.

Taking these factors into consideration, one wonders why the repatriation of refugees back to Myanmar has suddenly become such a pressing issue.

Myanmar's government has called for refugees and exiles to return. For the government, their return would be evidence that Myanmar has changed and will help boost its image both in the region and the world.

Returning refugees would also be an important source of cheap labour in resource-rich areas the government expects to turn into special economic zones, with one such zone planned in conflict-ridden Karen state.

The EU's decision to scale down funding for NGOs working at the border could also be indirectly contributing to a push for early repatriation.

It is imperative these actors recognise that premature repatriation will strain the fragile ceasefires in Myanmar.

Successful repatriation must be voluntary, with the full understanding and consent of refugees.

If I ask any refugee "Do you want to go home?", most will answer "Yes". After all, none of them chose to be a refugee.

However, if I ask "When would you like to go home?" the answer will be more nuanced.

Consultations to determine refugees' wishes can be easily manipulated. It is therefore crucial that they are undertaken in a genuine manner, allowing refugees to freely express themselves.

Before they go home, trust must be actively rebuilt. Military camps must be withdrawn from villages if people are to go back without fear. Landmines must be removed. Human rights violations must stop.

Education and health services must be made accessible and certificates attained in camps related to education, health, and various livelihoods must be recognised by the government.

Oppressive laws must be repealed, land rights must be guaranteed, citizen identity cards must be granted and official discrimination must stop.

Housing issues must be solved, otherwise repatriation will be transformed into forced relocation.

Hasty repatriation might serve donors' and the Myanmar government's short-term interests, but it will lay the ground for further, deeper instability that would make refugees even more vulnerable.

Myanmar's government hasn't turned rhetoric into concrete actions to prepare for the return of refugees. On World Refugee Day, let us not forget that refugees have a voice. They had no choice in leaving Myanmar, but they deserve the freedom to choose how and when to go home.

NLD prepares for new era of changes and reform

Ray of charter hope for end to unrest