The post-mortems of the failure by Asean to agree on a hitherto routine joint statement after their 45th Ministerial Meeting are coming in thick and heavy. Recriminations and acrimony are crisscrossing the region, the shockwaves being felt and analysed across the Pacific and to the Atlantic. 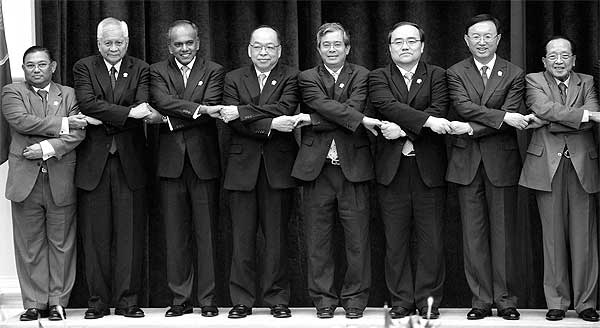 Although keen to show a united front, Asean’s feckless attempt to forge a united statement on the South China Sea issue reflects deep divisions in the regional group and the influence of China and the United States on some of its members.

The annual ministerial joint communiques are as old as Asean itself. Its unprecedented absence is thus a serious setback for the 10-member organisation, a crucial blow to its credibility and coherence in the lead-up to its much-vaunted Asean Community by 2015. While the diplomatic damage incurred in Phnom Penh will be glossed over in Asean capitals, serious and effective efforts beyond damage-control are needed before the Asean summit and its related top-level meetings with other major partners are held in November.

What transpired in the Cambodian capital on July 13 is still not completely clear and confirmed. But it is widely accepted that Asean's inability to stand jointly on even a diluted position was attributable to Cambodia's disagreement with the Philippines and Vietnam. As the rotating chair of Asean for 2012, Cambodia refused to include specific references to the Scarborough Shoal in the South China Sea, which is being hotly disputed by the Philippines and China. Vietnam also wanted to include wording on its right to an Exclusive Economic Zone (EEZ), as sanctioned by the United Nations Convention of the Law of the Sea. In other words, both Manila and Hanoi have rejected and challenged Beijing's claims over practically the entire South China Sea, through which more than half of global shipping passes. Apart from the Philippines and Vietnam, Brunei and Malaysia also are Asean claimants of parts of the sea vis-a-vis China.

The broader backdrop to this controversy is the set of rules that need to be formulated and implemented by China and the Asean claimants. Such rules, known as the Code of Conduct (COC) in the South China Sea, would deter military solutions, address territorial disputes and provide dispute-settlement mechanisms in view of international law. As a tentative understanding, Asean and China a decade ago came up with a Declaration on Conduct of Parties in the South China Sea (DOC). Under the Cambodian chairmanship, the DOC is supposed to be elevated, finalised and codified into a COC. Asean's debacle in Phnom Penh means the COC remains elusive.

An even broader regional canvass indicates the chief challenge for Southeast Asia as a region, as opposed to a regional organisation under Asean. The future of this neighbourhood shines brightly. It is likely to be prosperous and dynamic, notwithstanding its assortment of developmental problems ranging from wealth gaps and middle-income traps to rights abuses and environmental degradation. But its past is problematic, riven by enmity and conflict.

Following the Phnom Penh controversy, China's role and strategic intentions have come into fuller focus but they cannot be viewed in separation from the United States' highly-touted strategic rebalancing of its resources and assets increasingly towards East Asia and the Pacific.

As Asean chair, Cambodia will have a difficult time avoiding blame for not being able to come up with a mild Asean statement, even agreeing to disagree in writing, which Asean has been an expert in doing in the past. This time Asean disagreed and disagreed and proved it without a written document.

The Cambodian leadership would not have risked so much of its credibility, had it not been so beholden to Beijing. China has become an open patron state of Phnom Penh, having poured in more than US$10 billion (316 billion baht) of aid and investment in as many years. As many have noted the proof and irony, even the Peace Palace in Phnom Penh where the Asean ministers met was built by Chinese funds and adorned by Chinese art.

But neither can Manila shirk responsibility for insisting on its Scarborough Shoal dispute with Beijing to be mentioned in writing. Here is where the US rebalancing comes into view.

As a treaty ally of Washington, Manila may have been less assertive and more measured in its posture without America's Pacific rebalancing. Although it is hard to imagine Washington's willingness to go to war with Beijing over some Manila-claimed rocks in the South China Sea, it is plausible that Washington's re-engaged focus, commitment and resolve have emboldened the Philippines to stand up to China so vociferously.

Vietnam's role in Phnom Penh is as yet unclear. Its insistence on referring to the EEZ in the joint statement may be attributable to opportunism. If Manila can have Scarborough Shoal mentioned, why not Hanoi's EEZ?

Both Cambodia's and the Philippines' performances raise doubts at the diplomatic level. If seasoned diplomats were present on both sides, they would have been able to hammer out a joint position without all of the unnecessary acrimony. In Cambodia's case, such doubts on its diplomats would be heightened if it is true, as has been reported, that the Cambodians shared the draft version of the joint statement with the Chinese, who then vetoed it.

The aftermath of Asean's collectively impotent and individually insistent ways in Phnom Penh suggests a regional mix that is structurally different from the recent past. Asean has always had diverse and disparate interests, and the organisation has been granted much latitude in its region-building efforts.

The differences now are at least threefold. First, China's posture is much more assertive and less hedged, as evident on South China Sea issues and beyond. This point reflects China's jilted imperial pride, internal imperatives for growth, the transition of new leadership (which cannot afford to appear weak), inroads into its Asean relationships, particularly Cambodia, Laos, Myanmar and Thailand to a lesser extent. China knows that its pressure on and clout over certain Asean members would prevent key common Asean positions, such as the Philippine push for COC implementation. China thus wins for now on its bilateral approach.

Second, the US is more engaged as opposed to the previous decade. Its rebalancing means certain Asean members can rely on the US's new posture to hedge and leverage vis-a-vis China. The Philippines is at the forefront here but to a lesser extent also Vietnam, Malaysia and Brunei. In other words, current internal Asean rifts are attributable not just to China's assertive rise but also to the US's vigorous re-engagement.

Third, Asean's internal coherence is not what it used to be. On one hand, the Asean Charter codifies more cooperation and connectivity. On the other, the interests of Asean member states are more divergent. The Community objectives of 2015 can neither be taken at face value nor for granted. At a minimum, the Asean Political-Security Community (APSC) _ one of the three main pillars of the charter _ now appears challenged in view of what happened in Phnom Penh. This raises the question whether the potentially vigorous Asean Economic Community and the evidently weak Asean Socio-Cultural Community can shore up the APSC.

The states of maritime and mainland Asean appear to be increasingly preoccupied with different sets of interests. To rectify Asean's recent misstep and regain the momentum towards 2015, the organisation's leadership in all member states have much homework until November. The silver lining amidst adversity in Cambodia was Indonesian Foreign Minister Marty Natalegawa's last-ditch effort to come up with a six-point statement, which merely reaffirmed principles of the DOC. Read by Cambodian Foreign Minister Hor Namhong, it saved Asean's face and salvaged what would have otherwise been a complete disaster. Such leadership will need to be broadened and shared by other Asean member states in the coming months.

Thitinan Pongsudhirak is Director of the Institute of Security and International Studies, Faculty of Political Science, Chulalongkorn University.

Seven small- and medium-sized enterprises (SMEs) in the garment industry are ready to produce around 350,000 washable fabric masks per month to help solve the shortage of masks in Thailand.