Putin is afraid of girls
Opinion

Putin is afraid of girls

In 1931, the tyrannical dictator Joseph Stalin ordered the destruction of the main Christian church in Moscow. The Church of Christ the Saviour was dynamited and levelled to become the site for a monument to his horrific brand of communism. 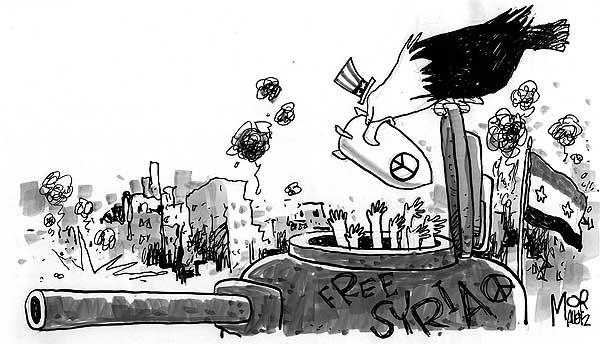 When that ideology was inevitably overthrown 60 years later, the Russian leader Boris Yeltsin had the Russian Orthodox church rebuilt in garish, golden form.

In the past decade, the church has been used by Vladimir Putin as a centre of power and force. Last week, that power was challenged by Mr Putin's political opponents and world leaders _ but mostly by a female punk band.

Pussy Riot is the band that has brought down Mr Putin's reputation to its lowest level yet. Last week, a court decision worthy of the Stalin show trials jailed three members of the band for two years.

Their so-called offence was to enter the state-friendly church and deliver a one-minute anti-Putin tirade. State-dependent prosecutors and judges found the women guilty of "hooliganism", another Stalin-era crime used conveniently to imprison inconvenient political opponents.

Pussy Riot, it needs saying, is a rather unpleasant group of politically militant females. But freedom of speech controversies seldom involve politeness.

The invasion of the church last March featured the young women's song Virgin Mary, Chase Putin Out. Because of the title, prosecutors added "inciting religious hatred" to the charges against the three women arrested.

That again is very convenient for Mr Putin, the head of a non-religious state and former chief of the KGB, one of the most notorious twisters and users of religion in world history.

It has been difficult to watch the persecution, prosecution and imprisonment of Pussy Riot. Clearly, President Putin lowered his iron fist on the band, in an all-too-familiar use of state power against political opposition.

The actions of the band members were tame by many standards of activism. Clearly, if they had acted in favour of the environment, for example, Mr Putin's security apparatus would never have raised an eyebrow.

The suppression of Pussy Riot was a demonstration of Russian state brutality at its ugliest. It always sought to demean the women without a thought to "innocent until proven guilty". They were even caged in the courtroom.

Of course such treatment only humiliated the supposedly manly, macho Mr Putin, so afraid of three girls he had to treat them like dangerous, armed prisoners of war. When a defence lawyer complained he had no rights in the case, a judge replied, "Indeed, all you have is obligations". Some defence. Stalin smiled in his grave.

Mr Putin will succeed for now in his aim of intimidating some political dissenters. But he is damaged goods. The United States called the prison sentences "disproportionate" instead of forthrightly condemning the unfortunate use of state power against political statements.

Germany called the sentences "excessively harsh" instead of pointing out there should have been no sentence at all. Britain at least had the fortitude to point out that Russia has no commitment to protecting human rights.

But Mr Putin, fearful of a female punk band, is learning that the KGB way can no longer be the Russian norm.