Countries in Southeast Asia are going through unprecedented economic growth despite global economic uncertainties. To be able to maintain this upward trend countries need to secure the health of their citizens _ especially the children. A high under 5 mortality rate threatens the overall economic development in the Region. Approximately 10 million children in the World Health Organisation's South-East Asia Region remain at risk from diseases like measles, diphtheria, whooping cough and tetanus _ all of which are vaccine preventable. 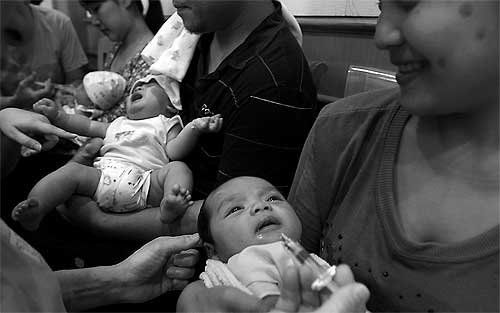 Babies are vaccinated at Chulalongkorn Memorial Hospital, part of a campaign aimed at raising awareness of the importance of vaccination. KOSOL NAKACHOL

So why is Southeast Asia leaving so many children behind? Even in countries with over 80-90% immunisation coverage the challenge is equity. Children who are outside the vaccine protective shelter are often poor and marginalised. These children are vulnerable to diseases because of malnutrition, unhygienic living conditions, poor water quality etc. Once sick, healthcare costs further impoverish their families. Parents who are day workers need to look after ailing children while they use up their savings and miss out on their daily earnings, pushing them further down the spiral of poverty.

Immunisation is one of the most cost-effective health interventions that can prevent disease and death among millions of children. When countries focus on the poorest of the poor, and reach the marginalised with childhood immunisation, they reap rich socioeconomic dividends.

While some causes for unimmunised children are common to all countries, each country has its unique challenges and each has to find its own way to address these. There is a need to adapt delivery of services so that daily wage earners can bring their children for immunisation without losing a day's wages. We must make vaccines regularly available in the hard to reach areas. Increasing the number of immunisation centres and the frequency of sessions in conjunction with strengthened infrastructure such as cold chain and logistics would help countries achieve their immunisation targets.

Realising the impact of this equity gap on childhood immunisations, 11 countries in the WHO's South-East Asia Region have decided to focus their efforts on children in areas where the routine immunisation coverage is below 80%.

Conflict and violence have frustrated efforts of some countries to reach and immunise children. Sri Lanka which has an overall national average of 100% coverage is now focusing its immunisation efforts on the two northern districts were severely affected by conflict. Thailand with a high 98% national coverage was earlier unable to provide full immunisation cover to three of its southernmost provinces of Pattani, Yala, and Narathiwat due to security conditions. It is now committed to focusing on these districts.

Focusing immunisation efforts can make a big difference as has been seen in Bangladesh. Bangladesh has successfully reduced its under 5 morality by integrating efforts, including immunisation, and focusing on its very young children. With 80% vaccination coverage throughout the country, Bangladesh has now decided to give a push to routine immunisation in 31 districts and 4 city corporations that needed additional assistance for increasing and sustaining coverage.

Geographic factors impact immunisation coverage in several countries. Nepal is reaching out to 33 of its 75 districts with intensified immunisation efforts and has hired additional vaccinators to reach them. These districts include those in far-flung mountainous areas and some lie in the Terai belt.

The challenges before Indonesia and India are somewhat similar. These countries are among the most populous and are home to over half the birth cohort of the WHO's South-East Asia Region. In Indonesia providing uniform immunisation services to populations scattered over 30 000 islands is both costly and logistically challenging.

For India the biggest challenge lies in the size of its population, including the large number of migrant populations. India is applying best practices from its vast Polio Eradication programme to intensify routine immunisation. These practices include mapping of migrant populations and risk assessments to guide actions and priorities. India is also providing increased priority for vaccine safety and security. State-level efforts are being made to strengthen the surveillance and reporting of adverse events following immunisation which could otherwise erode public confidence.

Countries are also facing difficulties in financing the routine and new vaccines selected by them for inclusion in their national immunisation schedules. It is vital that adequate funds are allocated for these vaccines.

Inequity in health services slows down a country's economic progress. Immunisation is an important tool in our arsenal to prevent death and disease in children. The time has come to invest in equity to ensure continued socioeconomic development in Southeast Asia.