Rich get bail, while poor go to jail
Opinion

Rich get bail, while poor go to jail

Today, the latest in a series of lese majeste trials will begin at the Criminal Court on Ratchadapisek Road. 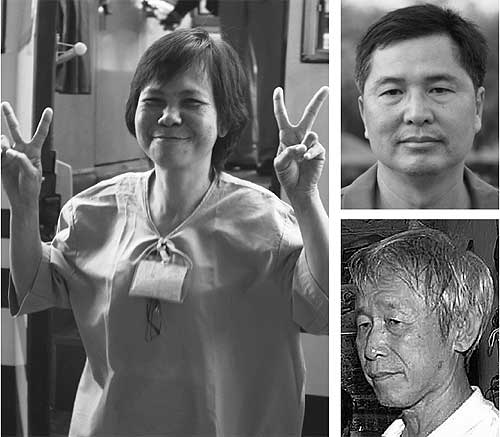 Mr Surapak, whose last name was withheld, is a promising 40-year-old programmer from Bung Kan province. He was arrested on Sept 2, 2011 at his Bangkok residence.

The police have accused him of posting defamatory remarks about the royal family on Facebook several months ago. He was denied access to a lawyer on the day of his arrest.

Mr Surapak was denied bail four times, even though, for his last request, the last bail guarantor was the Justice Ministry. Mr Surapak pleaded not guilty and said his defence could be better prepared if he was temporarily freed.

Somyos Preusakasemsuk, 51, has had his bail requests refused 11 times. The Criminal Court has scheduled a hearing in his case for tomorrow. But no one thinks a verdict will be delivered, as the Constitution Court has yet to rule upon Somyos's appeal that challenges the constitutionality of penal code Section 112.

The only female lese majeste prisoner, Daranee Charncherngsilapakul (aka Da Torpedo), has had her bail requests refused every time. She, and Thai-Singaporean Wanchai Tan (who is being held separately at Bangkok Remand Prison), have served the longest time behind bars for lese majeste charges.

Another high-profile lese majeste case where bail was denied involved "Uncle SMS" prisoner Ampon Tangnoppakul. He died in prison last May, just a month after his lawyer had started preparing to seek a royal pardon.

Ampon was convicted of sending four SMS messages deemed insulting to the monarchy, and was sentenced to 20 years in prison in November 2011.

The Court of Lower Instances, the Court of Appeals and the Supreme Court refused to grant him bail on eight separate occasions, because of the long sentence he was ordered to serve and the gravity of the offence he had committed.

The courts were reportedly not convinced that Ampon had committed the crime. The judges reasoned that if he were released, he might jump bail.

When faced with claims that the elderly Ampon was ill, the courts deemed that his condition was not yet life threatening and that the prison infirmary could provide for his medical needs.

It's not only lese majeste victims who are routinely denied bail.

Those dubbed "political prisoners" at the Temporary Prison at Laksi _ most of whom are grass-roots supporters of the red-shirt movement facing hefty penalties and long prison terms _ face the same situation.

Interestingly, their legal battles for bail have rarely been brought up by the mainstream media.

Meanwhile, the public is getting confused, even exasperated, with the criteria used by the court to grant bail and to mete out prison terms following a series of controversial court decisions.

Decisions that have affected the court's credibility include the light sentence for a teenager whose reckless driving caused nine deaths last year; granting bail to five former policemen who had been convicted of extrajudicial killings less than a week earlier (three of whom were sentenced to death); and granting bail to a tycoon's heir who ran over a police officer on a motorcycle with his Ferrari _ the officer was killed and the well-heeled young man fled the scene.

Many of us remember another controversial verdict in 2001 when a National Institute of Development Association (Nida) lecturer who killed his wife out of jealousy got no real jail time.

The killer was given only a few hours of community social work to compensate for his crime.

Understandably, the red shirts were flabbergasted after learning that the leader of the yellow shirts, Sondhi Limthongkul, who was sentenced to 85 years in jail for violating security laws, got his prison term reduced by half because of his confession.

Sondhi faces at least 20 years in prison, yet he was freed on bail pending his appeal.

As if this was not unfair enough, several core red-shirt leaders such as Jatuporn Prompan and Korkaew Pikulthong, who were charged with terrorism and lese majeste, got their bail approved.

For the record, the Truth for Reconciliation Commission of Thailand (TRC) has already recommended that Section 112 of the Criminal Code be amended. The TRC said the offence should be punishable by a prison sentence not exceeding seven years or a fine not exceeding 14,000 baht, and that high-level authority should be given before prosecuting such cases.

The commission has also urged the government to deal with calls for the temporary release of prisoners swiftly. Unfortunately, the TRC's proposals to the leaders of the House, the Senate, the opposition, and the government have gone unheeded.

With so many cases pointing to a double standard, it is understandable and inevitable for the public to feel that the legal system is unfair to the poor, and unjust to prisoners of conscience. Justice delayed is justice denied. Sadly, this is not the exception in our our legal system, but the norm that routinely applies to the weak and poor.

Telco merger up in air