Thai power development plan is at odds with reality
Opinion

Thai power development plan is at odds with reality

Thailand could substantially lower its future greenhouse gas emissions while increasing the welfare of its people _ even without disturbing its current economic growth rate. So what's stopping the government from setting and binding a national emissions reduction target? 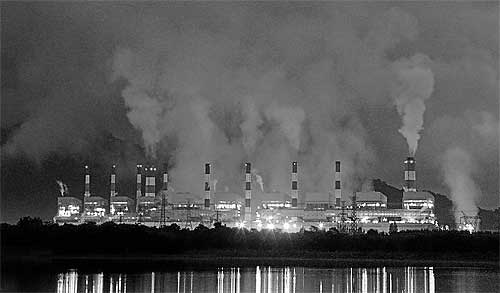 TheMaeMohcoalfired power plant has endured its share of controversy, even though its executives claim its filtering systems are of an international standard. But, the experts say, Thailand couldmovefrom its heavy reliance on fossil fuels and use energy more efficiently.

Plenty of work has already been done to figure out how Thailand could move from its heavy reliance on fossil fuels and use energy more efficiently.

The recent Alternative Energy Development Plan 2012-2021 (AEDP), approved by the cabinet last December, for example, sets out how Thailand could produce more than three times more energy from renewable sources, providing as much as 25% of the nation's total energy needs in 2021. By switching to renewables, the plan estimates that Thailand will reduce its GHG emissions by 76 million tonnes of CO2 equivalent _ every year _ in 10 years' time.

Of course, increasing the percentage of renewable energy in the fuel mix will be of limited effect if Thailand's overall energy consumption keeps growing as it has been. Over the past 20 years, Thailand's energy demand has more than doubled, and is likely to do so again by 2030 if nothing is done about it.

A second government plan tackles this problem head on. The Energy Efficiency Development Plan (EEDP), approved at the same cabinet meeting late last year, shows how Thailand can reduce its energy consumption in 2030 by 20%, basically through demand-side management.

The strategies and measures it proposes would, over 20 years, generate average energy savings of 14,500 kilotonnes of oil equivalent (ktoe) per year. This would save the unnecessary expenditure of 272 billion baht a year, and the unnecessary emission of 49 million tonnes of CO2 equivalent per year.

And, the EEDP says, it is technically feasible to exceed its targets and achieve even higher efficiencies.

Moreover, the PDP still predicts a massive hike in electricity demand from this year's peak of 26,355 MW to a forecast of 70,847 MW in 2030, which means at least an additional six coal plants, seven natural gas plants, two nuclear power plants and the purchase of power from several controversial dams in neighbouring countries.

There is much that can be done to improve the PDP. A recent assessment by energy analysts Cheunchom and Chris Greacen, published in April this year, challenges in detail the assumptions and solutions offered in the PDP.

They show that multiple revisions of the PDP have had a persistent tendency to overestimate projected demand. They argue that the power planning process must be improved, and outline the structural reforms that are needed in the power sector to move closer towards the government's stated policy objectives.

"By selecting excessive amounts of controversial, expensive, risky and polluting power plants, over cheaper, cleaner and safer alternatives," the report states, "the PDP is at odds with both Thai energy policy as well as the interests of the vast majority of Thai people."

The analysts explore options for least-cost measures that will provide the same service, comfort and convenience, even if not as much electricity is sold.

It is not difficult to see why this recommendation is difficult to swallow for those with a financial stake in energy production in Thailand. Giant energy companies make profits from building new plants and selling more electricity.

When the latest PDP was approved, the minister of energy confirmed a new round of bidding for six new power plants, which sent the stock prices of the main three independent power producers in Thailand shooting up. A small elite of Thai businessmen and politicians have an interest in keeping demand for energy production up, even to excessively high levels.

But such excess creates huge environmental, social and economic costs.

Many of the plans currently on the table for new power plants, particularly the most polluting, are proposed in environmentally-sensitive locations, in particular along the southern coastline and next to major rivers, threatening the livelihoods of countless communities and sparking vehement public opposition.

The Greacens' report puts forward a proposal for an entirely new PDP which has gone through a wide consultation process and gained acceptance amongst energy experts and the academic community as well as the endorsement of 147 civil society organisations.

This proposal shows how Thailand can avoid burdening the poor with the heavy environmental costs of dams, coal plants, nuclear reactors and the like.

In regards to the economy as a whole, the report shows that trillions of baht in unnecessary investment could be avoided, less power would need to be sourced from outside the country, and the average consumer's electricity bill could be lower.

Equally, CO2 emissions in the power generation sector could be avoided to such an extent that in 2030 they need rise only minimally from 2010 levels.

Taking a more holistic approach to energy planning would help Thailand on its path to become the "low-carbon society" it aspires to be.

There is no time to lose. Continued global warming is predicted to increase the frequency of tropical storms. Thailand is now much more aware of the serious and prolonged impacts of the flooding that such storms can bring.

But why should Thailand take action to reduce its climate impacts when many other governments are still shamelessly dragging their feet? It's true, nothing should excuse the Northern "Annex 1" countries. They must make deep, quick and meaningful cuts in their emissions as a matter of the utmost urgency. This is their clear, acknowledged, legal and moral responsibility.

However, those Non-Annex 1 countries with high and rising emissions can move ahead with a genuine process of reducing their carbon footprints, where it is shown that this can bring economic, environmental and social benefits.

While the Kyoto Protocol did not set a legally binding target for developing countries, under the Climate Change Convention, they agreed to take climate change into account, as far as feasible.

Developing countries argue, convincingly, that they have a right to carbon space, because they have as much right to develop as any of the Annex 1 countries who have grabbed far more than their share to reach their current level of development.

However the right to develop should be understood as a right to increase the quality of life of the majority of their people. It is not a right to pursue unsustainable patterns of consumption and production, nor a right for elite groups to acquire the wealth considered successful in the North, while the welfare and interests of the poor are trampled upon.

Capitalist elites in developing countries must stop blocking climate commitments on a pretext that it is the poor's need for energy that they are protecting. The poor have a right not to be subjected to the heavy costs of building unnecessary and polluting energy plants in their communities.

The AEDP, the EEDP and the Greacens' recommendations for a new PDP, show that there are already ways in which Thailand can substantially reduce its greenhouse gas emissions in the future, while improving social welfare, and that several options exist to provide energy from less environmentally destructive sources.

Rebeca Leonard is a freelance writer, Jacques-chai Chomthongdi and Faikham Harnnarong are members of the Thai Working Group for Climate Justice.